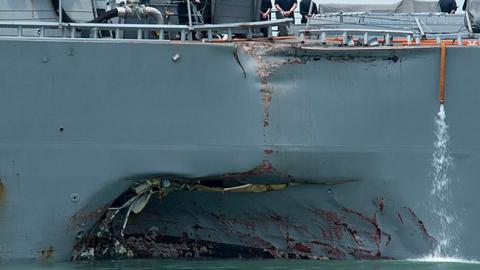 Coming on the heels of the June collision involving the USS Fitzgerald (DDG 62) in which seven Sailors were killed, news of Monday's collision between USS John S. McCain (DDG 56) and the Alnic MC—a 30,000-ton Libyan flagged oil and chemical tanker—naturally raises questions about U.S. Navy operations and the standards of seamanship and navigation practiced in the fleet. None of these questions can be easily answered, but all can aid in forming reasonable hypotheses for further inquiry as the Navy attempts to understand the two tragedies. Nothing here is designed to affix blame or responsibility. We cannot know how the USS McCain and Alnic MC collided, and we do not yet have the results of the Navy’s exhaustive inquiry into the earlier USS Fitzgerald collision. However, ships adhering to the maritime rules of the road do not collide, and in each of these situations, some level of human error will assuredly be determined. There are few organizations like the U.S. Navy in which a culture of responsibility and accountability is so consistently maintained, and any systemic review of these collisions will surely encompass questions far deeper than these.

I have every confidence that the Navy will move out quickly in trying to determine the extent of systemic links between the USS Fitzgerald and the USS John S. McCain collisions. No stone will be left unturned, and the organization will emerge more sharply focused on the unrelenting demands of the sea.