US Congress Reaffirms Ties with India 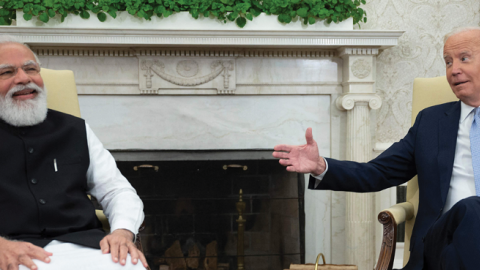 Caption
US President Joe Biden meets with Indian Prime Minister Narendra Modi in the Oval Office of the White House on September 24, 2021, in Washington, DC. (Photo by JIM WATSON/AFP via Getty Images)

The US House of Representatives paved the way for removing a potential irritant in India-US relations last month when it called upon the Biden administration to issue an India-specific waiver under the Countering America’s Adversaries Through Sanctions Act (CAATSA). Secretary of State Antony Blinken can now exempt India from CAATSA sanctions designed to impose restrictions on countries that buy military systems from Russia.

The purpose of CAATSA was to chasten the United States’ enemies, not punish its friends—a point made by supporters of the amendment to the National Defense Authorization Act (NDAA) 2023 that called for the waiver for India. Ro Khanna, the Indian-American Democratic congressman from California who moved the amendment, noted that India needs to maintain its Russian weapon systems as it faces “immediate and serious” threats from China.

The threat of CAATSA sanctions against India would have been self-defeating and would not have advanced US interests. If the amendment is voted upon in the US Senate, it is likely to get overwhelming support. But it is likely that the Biden administration will take the lead from the House of Representatives and reaffirm ties with India without necessarily waiting for a Senate vote.

When Congress legislated sanctions over arms purchases from Russia in 2017, it probably did not think through the likelihood of hurting India, a critical US partner in the Indo-Pacific strategy for limiting China’s influence.

In 2018, India signed a $5 billion deal with Russia for purchase of S-400 surface-to-air missile systems, which are currently due for delivery. New Delhi has argued that it does not make sense for the US to stop India from acquiring a critical weapons system that is needed for India’s security, especially when the US was slow to offer India a comparable missile system.

India remains important to US strategy, notwithstanding reservations over India’s slower than expected military modernization and economic growth. According to a 2022 Gallup poll, 77 percent of Americans have a favorable view of India, something that has remained consistent over the last two decades. Similarly in 2021, 79 percent of Indians had a favorable image of the United States.

The Quadrilateral Security Dialogue, a grouping of Australia, India, Japan, and the United States better known as the Quad, has grown over the last one and a half years into what former Japanese Prime Minister Abe Shinzo had hoped, a convergence of four democracies that share similar values and interests.

The agenda of the Quad has expanded, with collaboration between the four countries on critical and emerging technologies; telecommunications; green shipping practices and corridors; green hydrogen; collective efforts on sustainable infrastructure and transparent connectivity; and maritime domain awareness.

In addition to the Quad, India and the US are also part of a Middle East quad – or I2U2 – a grouping of India, Israel, the United Arab Emirates (UAE), and the United States. The four countries announced a Clean Energy Initiative that would focus on collaboration in the renewable energy sphere.

India-U. security relations have grown rapidly over the last decade and a half. India imported $21 billion in military equipment from the US over the last decade though in 2008, military imports from the US were virtually non-existent. India has signed four foundational agreements that bind close American military partners and allies. In 2016 India was designated a “major defense partner” and India conducts its largest number of military exercises with the United States.

Moreover, the United States is currently India’s largest trading partner, with annual bilateral trade in goods and services at around $152 billion. Over 200 Indian companies operate in the United States and play an important role in the information technology and digital services sector. Two recent reports that studied the US workforce show that, in 2021, Indian technology firms generated $103 billion in revenue, contributed $40 billion toward GDP, and directly employed 207,000 people.

In May, India joined the Indo-Pacific Economic Framework, showing its support for the US Indo Pacific strategy. Technology is a key frontier in the China-US peer competition. In this field, India-US cooperation has grown substantially both in the bilateral and multilateral – primarily Quad – frameworks. The two countries work closely in the fields of artificial intelligence (AI), biotechnology, quantum technology, and semiconductors.

India and the US are also partners in healthcare, with India supplying 60 percent of the generic pharmaceutical requirements of the United States.

Given the strategic importance of the India-US relationship, the Congressional vote on CAATSA recognizes the importance of removing the specter of sanctions and threats from this critical partnership. India and the United States are close enough to each other to discuss any differences of views (such as those on Ukraine and Russian arms purchases) through quiet diplomacy.

Read in The Diplomat