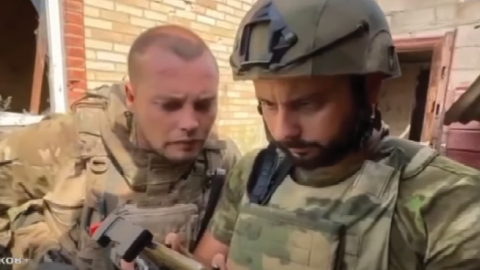 “This is how Mavic is hijacked,” a man says in Russian, referring to the Mavic drone, used by both sides of the Ukrainian conflict for reconnaissance.

“Yep, that’s it, losing, losing,” an obviously frustrated Russian soldier responds in the video posted on YouTube and message boards, as he fiddles with joysticks attached to a smart phone.

Finally he gives up. Ukrainians have taken over the drone, and may use it to locate the position of the Russians.

“Gentlemen,” one of the Russians says, “I suggest we start getting out of here in the maximum speed mode.”

The scene, which played out on Russian television, is now a viral online video promoted by Ukrainian outlets — one of many ways Kyiv pushes its story of a scrappy underdog taking down an inept invader.

The war in Ukraine offers some revealing lessons about the future of combat, but perhaps the most important one is that information is king. The damage and casualties suffered by both militaries have been devastating, but the course of the war is being dictated much more by the narrative — and which side owns it.

From the start of Russia’s invasion, Ukrainian President Volodymyr Zelensky used social media to make his case for help from NATO and the United States. Ukraine’s early success defending Kyiv helped by showing the results of Western weapons and intelligence support. In the months since, Ukraine’s defenders scored a string of high-profile victories by sinking the Moskva, retaking Snake Island, and destroying Russian ammo dumps and command centers. Although not decisive on the ground, these wins sustained enthusiasm for the war effort in Europe and the United States.

Russia’s military unwittingly helped Ukraine control the narrative. Moscow’s ham-handed propaganda falls flat in the face of real-time updates from Ukrainian troops in the field, even though Russia has been gaining ground across Ukraine’s east and south.

Ukraine will need a lot more media victories to keep the military and economic aid flowing this winter when temperatures drop and high energy prices start to bite. Leaders in Berlin and Ottawa already appear to be softening and between its control of grain shipments and gas supplies Russia has more arrows in its quiver than just its boots on the ground in Ukraine. By squeezing the world’s access to energy and food, Vladimir Putin could convince NATO allies to begin throttling back their shipments of arms to Ukraine.

Conditions along the front lines will also degrade this winter, which could lead to a literal and figurative frozen conflict. Putin has already stated his intent to grow the Russian Army by 137,000 soldiers to mount another offensive, which will likely start in the spring. Between now and then Ukraine’s forces need to regain the advantage and begin pushing Russian troops back otherwise they may never regain territory lost in the Donbas and southern Ukraine.

Expect Ukraine’s leaders to intensify the battle of the narrative in the months ahead to spur more shipments of advanced Western arms such as MQ-1 Gray Eagle drones, AGM-88 homing missiles and longer-range missiles like the US ATACMS.

Ukrainian troops will need the reach and precision of these weapons to go beyond just disrupting Russian logistics and command and control and start driving Moscow’s troops back toward the Russian border.

Ukraine will need high-end arms to fight Russia like NATO would, but clearly the path to getting them does not run through gleaming conference rooms in Brussels. Instead, the way Ukraine will get the support it needs to turn stalemate into victory runs through Twitter and TikTok, the weapons of today’s information battlefield.