A Wolf Warrior in Sheep’s Clothing 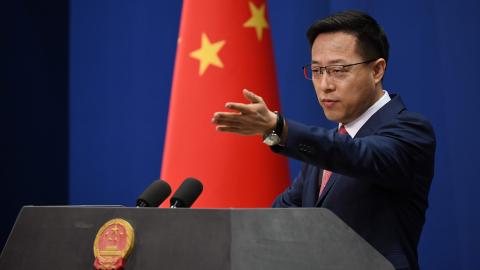 Beijing has embarked on a charm offensive since concluding its 20th National Congress of the Chinese Communist Party in October.

China might have blunted its sharp power and abrasive diplomacy earlier in this crucial year for the CCP. Instead, Beijing announced a no-limits partnership, propped up the North Korean regime, and conducted dangerous military drills around Taiwan. Chinese President Xi Jinping's opening remarks at the congress made credible fears that he was accelerating plans to seize Taiwan, the sine qua non for achieving China’s national rejuvenation. But China has also sought to improve its image since affirming Xi’s third term at the apex of power.

The charm offensive was on ample display as Xi returned to the world stage with a flurry of summit meetings last month at the G-20 gathering in Indonesia and the APEC forum in Thailand. He struck a civil demeanor in his face-to-face meeting with President Joe Biden. He may be willing to discuss guardrails for preventing major-power conflict.

Zhao’s muted voice marks a welcome contrast to his baseless accusations. The United States did not create the deadly coronavirus pathogen in a secret bioweapon lab. Still, Zhao knows uttering such a sensational claim helps to neutralize a similar charge leveled at China’s Wuhan Institute of Virology.

Over the past several years, foreign ministry officials have weaponized their press briefings, ambassadors have dispensed with convention and lambasted their host countries on social media, and Beijing has stepped up its influence operations. Yet a hostile attitude comes at the cost of coalescing adversaries. Even more, mounting problems at home require a holiday from wolf-warrior diplomacy.

As Xi set out for Central Asia in September, on his first foreign travel since the pandemic's start and a month before the party congress, the CCP understood it was time to dial back the rhetoric. Meeting Western and East Asian leaders in November, Xi sought to sell China as a cooperative rather than a disruptive force. In the words of U.S. Ambassador to Japan Rahm Emanuel, Beijing "airbrushed" its approach to international affairs.

Even when its most strident arguments failed to influence foreign audiences, Beijing knew the dramatic aspects of its wolf-warrior diplomacy might intimidate foreign audiences. At the same time, the brash narrative could help to keep the Chinese people in check. The CCP is paranoid about Western-inspired color revolutions or any uprising that could question party legitimacy.

Yet a peaceful protest against zero-COVID policies demonstrates that, sometimes, blank placards can make a louder impact than party slogans and internal security crackdowns.

Xi cannot easily back off harsh lockdowns until he is ready for China to live with COVID. That vulnerability makes it even more vital to kick-start economic growth amid a collapsing property market. The softer approach to foreign affairs apparent in recent weeks is undoubtedly intended to help reassure jittery markets and trading partners.

As Beijing seeks stabilization more in the year ahead than the year behind, it monitors elections in Taiwan and the U.S. for opportunities to improve its prospects. President Tsai Ing-wen’s Democratic Progressive Party took a beating in recent local elections in Taiwan. The resuscitation of the Kuomintang, perhaps led by Chiang Kai-shek’s great-grandson, Chiang Wan-an, opens a plausible path for how Beijing can stifle Taiwan’s independence through co-option rather than invasion.

The outcome of elections in Taiwan and the U.S. in 2024 will determine two of the critical figures against whom Xi will have to deal as he plots his next moves for realizing his China dream. Despite a less overtly hostile tenor to U.S.-China relations, it is crucial to understand that Xi is not altering any of his ambitions. While the White House hopes the Xi-Biden summit might catalyze a search for stability, China may only be searching for a respite.

In other words, wolf-warrior diplomacy is muted, not dead. And any reasonable-sounding Chinese official you hear in the coming months is likely just a wolf warrior in sheep’s clothing.