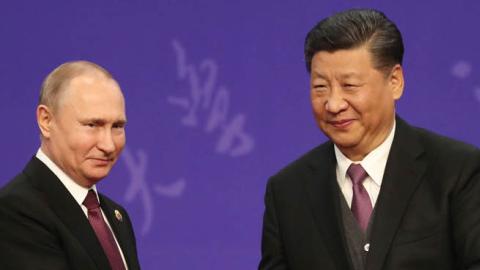 By foiling Russia’s initial invasion attempt, Ukraine’s valiant defenders have exposed some of the Russian military’s many limitations. As they rush weapons and munitions to Ukraine, many Western observers have been cheered by Vladimir Putin’s setbacks, but they should also see in the Ukraine war a warning for the U.S. military and its partners. In a conflict between the U.S. and China, the tables easily could be turned, and American service members could suffer as severely as their Russian counterparts are now.

Much of the war’s details are still uncertain, but it appears that a major flaw in Russia’s invasion plan was inadequate attention to logistics. As Russian units entered Ukrainian territory, they bypassed Ukrainian defenders who subsequently ground the initial Russian offensive to a halt in part by attacking Russian resupply convoys, frequently employing small arms and shoulder-fired missiles. In an Indo-Pacific conflict, China is likely to use similar tactics, but with much larger missiles.

Most modern militaries — Russian and U.S. included — boast formidable capabilities that rely heavily on extensive logistical networks. Russia’s military depends on railways to move its forces and does not have nearly enough trucks to adequately resupply its forces in Ukraine. U.S. forces do not depend as much as the Russians do on any particular infrastructure, but operating across the Pacific Ocean requires immense amounts of fuel. Rather than directly take on American forces, China’s military could target vital capabilities without which the U.S. military would be markedly less effective. Fuel logistics are a prime target of this “systems destruction warfare” doctrine, and the American military is vulnerable.

One of the most consequential scenarios for a Sino-American conflict is an attack by China on Taiwan that elicits a U.S. armed intervention to defend the island democracy. Russia’s difficulties subduing Ukraine suggest that a battle for Taiwan could be longer and costlier than many analysts have projected, but Taiwan is still not likely to fend off an invasion without U.S. and allied reinforcements.

Each type of force the U.S. could use to assist Taiwan or other partners needs fuel to survive, and our fueling infrastructure could be our Achilles’ heel. Although American aircraft carriers and submarines are nuclear powered, a carrier group’s escort ships and aircraft burn about half a million gallons of fuel per day. In an Indo-Pacific conflict, the U.S. military projects that it needs at least 86 tanker ships to move fuel around the theater. The Department of Defense can count on having nine. The current plan is to try to make up the shortfall by renting foreign-flagged vessels and crews, but large portions of them likely would decline to sail into a war zone.

If the U.S. Navy is hobbled by lack of fueling capacity, the other services are in equally bad shape. Eighty percent of the Air Force’s combat aircraft are relatively short-range fighters that would face difficulties getting to the fight from distant bases. One option would be to refuel them mid-flight to give them the necessary range, but our aerial refueling aircraft are old — the KC-135s, the most numerous refueling aircraft, are 60 years old, on average — and they depend on a relatively small number of bases, many of which are inadequately fortified against bombardment from China’s missiles. The Army and Marine Corps plan to distribute on various Pacific islands teams to resupply aircraft and threaten China’s forces with long-range missiles, but there is only enough “over the shore” fuel distribution capacity to function in two or three places at a time.

These weaknesses undercut the credibility of U.S. military forces and invite aggression by China. As the Russians have discovered to their dismay, a military armed to the teeth with powerful weapons is of limited utility if it cannot move. China’s military clearly recognizes this fact and its “systems destruction warfare” has the potential to sideline billions of dollars’ worth of equipment and endanger thousands of American lives in the initial stages of a conflict. If Beijing grows too confident that it can cripple the United States — accurately or not — war could result.

The good news is that the U.S. military could quickly fix many of these weaknesses with relatively cost-effective changes. For example, the Navy could support expansion of the U.S. Merchant fleet, which could engage in commerce during peacetime and be ready for a conflict. Similarly, the Air Force could repair old World War II airfields throughout the Pacific and build hardened storage tanks. And the Army and Marine Corps could better leverage commercial infrastructure and field more expeditionary fuel transfer systems. None of these initiatives requires developing advanced technologies, but rather, straightforward investments in logistics and infrastructure.

Russia’s inability to adequately resupply its forces in Ukraine has been an embarrassment. For the United States, losing a potential war with China for the same reason would be a catastrophe.