Pakistan’s Military Is Here to Stay 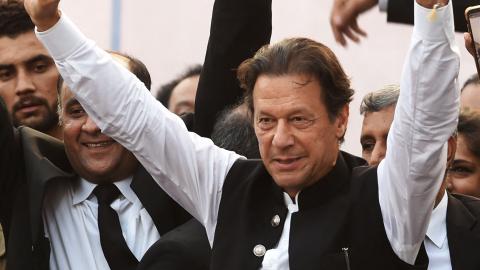 Pakistani politics have always revolved around the country’s military. Civilian politicians compete for support while criticizing—or seeking covert help from—a ubiquitous security establishment. Since his ouster as prime minister last April, cricketer-turned-politician Imran Khan has become the latest to challenge this system. But Khan’s polarizing rhetoric is only adding to Pakistan’s chaos—not marking the advent of a revolution.

The government elected after Khan’s removal via a no-confidence vote initially tolerated the former prime minister’s attacks on generals, judges, and political rivals in addition to his conspiracy theories about his ouster being the result of a US-backed plot. Unlike previous civilian leaders who fell afoul of the military, Khan was not immediately arrested, charged with corruption, or disqualified from future elections by judicial fiat. But now, Khan and his close aides are beginning to face the wrath of the state apparatus. Both the security establishment and the civilian government seem to have realized that Khan’s populist influence will not diminish without prosecuting him and his associates.

On October 12, Pakistan’s Federal Investigation Agency charged Khan with violating laws barring foreign funding for political parties. Since Khan first ran for public office in 1997, he has raised funds for his Tehreek-e-Insaf (PTI) party from foreigners and overseas Pakistanis, many of whom had donated to charities he started after retiring from cricket in 1992. Although some of this fundraising has likely always violated Pakistani law, prosecutors long held off disciplining Khan or his party because they enjoyed the establishment’s blessings.

Prime ministers from both the PML and PPP have been ousted from office multiple times by the Pakistani military, which routinely influences Pakistan’s superior judiciary. Supreme Court judges then often provide legal cover for otherwise undemocratic and unconstitutional actions initiated by generals. The Supreme Court endorsed Pakistan’s four military coups in 1958, 1969, 1977, and 1999, as well as accepted the generals’ right to suspend the constitution under its so-called doctrine of necessity. On other occasions, the military orchestrated palace coups in 1990, 1993, and 1996, resulting in dismissal of elected prime ministers by the president and with the support of the Supreme Court. In 2012 and 2017, prime ministers were removed from office at the behest of the military through direct intervention by the Supreme Court. Together, the Pakistani military and judiciary have never allowed a PML or PPP prime minister to stay in office for the full five-year term of parliament.

Khan presented himself as the military-backed alternative to the PML and PPP’s perceived corrupt, dynastic politics. His populist rhetoric appealed to young middle-class Pakistanis as well as those who had been more comfortable during the country’s past periods of military rule than under its civilian democrats.

Khan at first failed to get traction as a politician, losing all seats his party contested in the 1997 parliamentary elections. He managed to enter parliament in 2002 in elections organized by the military regime of Gen. Pervez Musharraf. Only in 2013 did Khan’s party win a significant number of seats in parliament for the first time. In 2018, he finally translated his celebrity status into high political office with direct help from Pakistan’s intelligence services and the military. In that year’s elections, the PTI emerged as the single-largest party in the lower house of parliament, but it could not form a government without the support of smaller parties. The military overcame this last hurdle by advising three such groups to form a coalition with the PTI.

Khan’s ascent to the office of prime minister became possible because of a controversial Supreme Court ruling that disqualified Nawaz Sharif without trial as well as a spate of corruption cases hobbling most of Khan’s other opponents in the PML and PPP. To get to this point, the military had ensured favorable media coverage for Khan and his party, helped prosecute his opponents, and directed locally influential candidates to join the PTI. Opponents and foreign observers also alleged selective rigging on election day.

Those corruption cases against PML and PPP leaders failed to make much headway in trial courts and are currently being thrown out for lack of evidence. But Khan continued to rail against his opponents, telling his supporters that Pakistan was destined for greatness under his leadership. Like most populist leaders, however, he had no answers for Pakistan’s problems and governed poorly. Khan often addressed the nation on television and rallied his supporters with a mix of Islamist and nationalist grandiloquence. The military gradually lost faith in the former prime minister as Pakistan’s economy took a nosedive and its foreign relations suffered.