Has China silenced the last of its globally prominent dissidents? 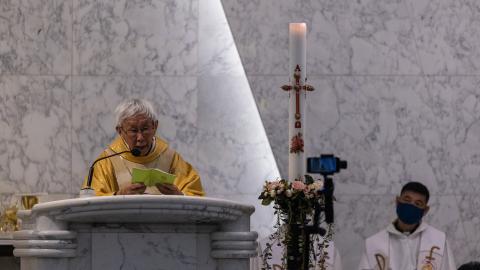 Caption
Cardinal Joseph Zen holds a mass at the Holy Cross Church on May 24, 2022, in Hong Kong, China. (Louise Delmotte via Getty Images)

Cardinal Joseph Zen, along with five co-defendants, was convicted on November 25 by a Hong Kong magistrate’s court of a regulatory breach for failing to properly register a humanitarian-aid fund of which he was a trustee. The fine of about $512 that he has incurred is relatively small, but there’s more to this case than meets the eye.

When asked about Zen’s trial last September, Pope Francis responded, “He says what he feels, and you can see that there are limitations there.” Every observer understands that the cardinal’s real offense was dissenting from Chinese Communist Party repression. His real sentence, therefore, includes self-censorship and self-restraint from anything that might be construed as countering party ideology. It is a taste of much worse legal trouble ahead for the Church. Moreover, the draconian National Security Law, under which Zen is separately being investigated, contains a vague prohibition on “foreign collusion” that hangs like the sword of Damocles over him and the rest of the Catholic Church in Hong Kong.

The trial of the 90-year-old Bishop emeritus of Hong Kong sent shock waves through the region’s Church community, signaling that none there is safe. Unlike mainland China, Hong Kong has never had a Chinese Catholic Patriotic Association (CCPA) policing its Catholic Church. Once a center of reliably free Christian learning and discourse, the region’s Christians are now getting used to checking what they say and do. As the current bishop of Hong Kong, Stephen Chow, explained, “The difficulty of the national security law lies in not knowing where the red line is. Educators, social workers, and even legal professionals face barriers. . . . Everyone needed to know where the boundaries were so they would know how to express themselves.” It was a telling complaint from one who favors dialogue and compromise.

In an interview last February, Bishop Chow, an educator and former Jesuit-school head, staunchly defended as indispensable the mission of Hong Kong’s 249 Catholic schools in developing “independent thinking.” He asserted, “I find it unacceptable for human dignity to be ignored, trampled upon, or eliminated entirely.” Shortly after Zen’s arrest last May, he sounded more wistful than defiant. Using the analogy of a flower growing in the crack of a wall, he reflected, “I can feel that Hong Kong, including our Church, are becoming more like an existence within cracks. . . . That spaciousness for our freedom and expression, which we had taken for granted, seems diminishing.” In October, with the Vatican approving, his diocese felt it was prudent to change the name of its commission on “Justice and Peace” to the less provocative “Commission on Integral Human Development.”

On November 15 and 16, while the Zen verdict was pending, Chow, along with theologians from the Holy Spirit Center, the renowned research center of China’s Catholic Church, was called to a command performance — an online conference with the leaders of the CCPA and the Chinese Catholic Bishops’ Conference (CCBC), neither of which the Vatican recognizes as legitimate. According to the government-approved press, CCBC chairman and conference organizer Bishop Shen Bin opened by praising the recently concluded, “victorious” Chinese Communist Party’s 20th Congress, and establishing that its “spirit” would guide the conference toward “fully implementing Xi Jinping’s Thought on Socialism with Chinese Characteristics for a New Era.” Referring to both the CCPA and the Hong Kong diocese, Bin then made a stunning pronouncement: “It is necessary to jointly promote the translation and interpretation of the Bible, and promote sinicization of China’s Catholicism.” An example illustrating what he was talking about can be found in a recent government textbook, in a lesson on enforcing the law, which retells John’s Gospel account of the adulterous woman with a new ending: It concludes with Jesus stoning the woman. If Chow pushed back on this plan to enlist him and the others in the project to conform Scripture and Catholic teaching to party ideology, it was not reported.

This brought to mind a meeting with Cardinal Zen and a group of China observers in my Washington office, in April 2011. Stating that repression against China’s churches was being overlooked, the cardinal explained that, rather than using attention-grabbing physical torture and bloody attacks against Christians, the Chinese Communist Party applied measures to control the Church that were incremental, more insidious, and calculated to evade Western economic sanctions. He cited the case of Bishop Feng Xinmao. In December 2010, Feng refused to attend the Conference of Chinese Catholic Representatives, convened in Beijing to select new leaders for the CCPA, because he did not want to validate a group that is viewed as illicit by the Vatican. As a journalist who was present recounted, “According to Cardinal Zen, ‘more than 100 police’ were dispatched ‘to ensure that the bishop [went] to the meeting.’” A decade later, insidious pressures, including repeated brainwashing in hidden detention sites, continue to be applied to force Catholic bishops and others to conform to the Chinese Communist Party’s religious diktats and change the character of China’s Catholic Church and the Christian religion.

Zen is among the few Catholic bishops to have advocated for persecuted Chinese Catholics. He led campaigns on behalf of Bishop Julius Jia, who is detained in a secret “black” jail for defying the party’s prohibition on children from praying. He championed imprisoned lay dissenters, such as Apple Daily publisher Jimmy Lai. He strongly condemned the CCPA as a “schismatic Church,” and criticized the Vatican’s Ostpolitik agreement to “normalize” China’s Catholic Church and to give Beijing a role in mainland episcopal appointments.

The Vatican has not officially protested Zen’s trial, consistent in its practice of maintaining virtual silence about China’s persecuted bishops. (I was able to research their names in old news accounts and by consulting Church experts.) It argues that such criticism of the Chinese Communist Party would be harmful to its dialogue with Beijing — a dialogue in its fourth decade, with little to show.

Some mischaracterize Zen’s courageous witness as “intemperance.” Yet, for most of his ministry, he quietly served as a theology professor in CCPA-aligned seminaries and, during a stint as supervisor of his Salesian order, found it necessary to work with mainland government authorities. He held back his criticisms until he retired from episcopal responsibilities, in 2009.

The trial is likely to have silenced China’s last globally prominent dissident. Zen’s outspoken criticisms of the party were the desperate warnings of a hero trying to shake the world out of its ignorance and complacency. Aside from the occasional riot over Covid lockdowns and one-off protests that are quickly crushed, no prominent and sustained voice of dissent remains in the country. It is now up to us to speak out for China’s voiceless.