How Pope Benedict XVI Stood Up for Chinese Catholics

The presence of the persecuted Cardinal Joseph Zen at the late pontiff’s funeral was a reminder of Benedict’s welcome firmness on this issue. 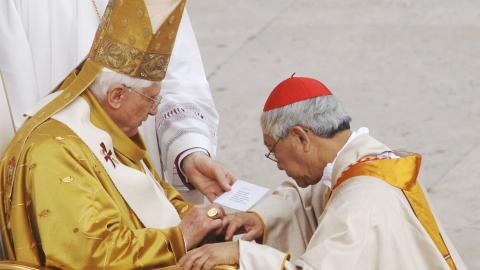 A highlight  of the subdued funeral of Pope Benedict XVI at St. Peter’s Basilica on Thursday morning was the sight of Cardinal Joseph Zen, dressed in flowing red robes, unbowed by political pressures from either the Chinese Communist Party or the Vatican, concelebrating the Mass with Pope Francis. It was an extraordinary moment that stood out in an otherwise too ordinary ceremony for such a great theologian-pope. Perhaps for the last time, Zen, the 90-year-old former bishop of Hong Kong, was viewed worldwide performing his ministry at the epicenter of Catholic power, in the symbolic embrace of the universal Church, in a role befitting a heroic church leader. It was a stark contrast to his public appearances over the past year, in the dock of a Hong Kong courtroom and entering interrogation at a police station, facing the unjust accusations of the Chinese Communist Party, not to mention his last visit to Rome, in 2020, when the papal-palace gates firmly shut him out.

Zen’s appearance was also a reminder of Benedict’s remarkable pastoral concern for the Catholic Church in the People’s Republic of China (PRC). In a recent blog post, Zen wrote a tribute to the deceased pope, praising his significant efforts to elevate the issue of the Church in China. Benedict’s most consequential action in this regard was to make Bishop Zen a cardinal, in 2006. Zen has been the voice of conscience for the suffering Church in China in recent years. It was undoubtedly Benedict’s wish to have him invited to his funeral. Benedict’s other China initiatives hold enormous potential, and Zen states that they remain the best way forward for China’s Catholics. But, as he argues, they have been thoroughly undermined by Vatican bureaucrats in the Roman Curia, who seek an essential Church goal, episcopal unity within China, but pursue it even at the sacrifice of communion with the universal Church, headed by the pope.

Pope Benedict’s 2007 letter to China’s Catholics is the “magna carta,” in Zen’s words, of the Church in the PRC. The letter was the result of much redrafting by a commission of experts, such as Zen, and relevant Curia members, with Benedict’s careful review and final approval. Its purpose was to set forth “some guidelines concerning the life of the Church and the task of evangelization in China.” It addressed the question of how to ensure the ability of the faithful to follow Jesus’s teaching to “give to God the things that are God’s” in a state that is hostile to the very notions of God and of a universal Church and that requires, through the CCP’s Chinese Patriotic Catholic Association, that all Catholic clergy come out in the open and sign pledges of “independence” from Rome.

As some Patriotic bishops had begun to secretly swear allegiance to the pope, and as some papally appointed underground bishops, under CCP pressure, had signed the “Patriotic” pledge, Benedict in his letter grappled with the issue of how China’s various Catholic streams could be reconciled and unified and remain in hierarchical communion with the universal Catholic Church. In his book For the Love of My People I Will Not Keep Silent (2019), Zen details his constant efforts within the drafting commission to hold the Curia in check as it tried to mute theological and ecclesial distinctions between the universal Catholic Church and CPCA, an instrument of Communist Party control over Church affairs in China. Zen had Pope Benedict’s crucial support.

Pope Benedict signed off on a final version in which he discussed communion and unity at length. Benedict emphasized in a stand-alone paragraph: “Communion and unity — let me repeat — are essential and integral elements of the Catholic Church: therefore the proposal for a Church that is ‘independent’ of the Holy See, in the religious sphere, is incompatible with Catholic doctrine.” He added that “compliance with those authorities is not acceptable when they interfere unduly in matters regarding the faith and discipline of the Church.” Such interference, Benedict determined, occurs under the CCP “indeed almost always” — a key finding for a Chinese bishop to consider in deciding whether he should join the CPCA but one that was omitted from the Vatican’s Chinese translation.

To the pope’s dismay, in fact the Chinese translation of his letter, done by a Vatican adviser, contained several errors that supported the bureaucracy’s view that unity should take precedent, with the underground clergy being encouraged to join the CPCA and take its pledge of independence from Rome. Benedict authorized a corrected Chinese translation to be posted on the Vatican website. A year later, Benedict’s important letter seemed barely known, to judge from the many Chinese clergy who joined CCP celebrations, defying papal authority, on the 50th anniversary of the first illegitimate episcopal ordination, as Zen recounts. The secret Vatican–Beijing agreement of 2018 has de facto prioritized unity within the CPCA over hierarchical communion, with key Vatican officials even disparaging as “stubborn” and laboring under a “psychological barrier” the faithful Chinese bishops who, like Zen, disagree.

Pope Benedict, at Zen’s suggestion, also established in late 2007 a high-level China Commission to handle emerging issues in the Church. It was modeled on Pope John Paul II’s secret Commission on the Russian Church, chaired in the 1980s by Cardinal Jozef Tomko, the prefect of the Congregation for the Evangelization of Peoples, and including Cardinal Ratzinger as a member. The China Commission was poorly run, left controversial issues to the bureaucrats, and has since quietly stopped convening meetings, Zen, himself a commissioner, reports in his blog. In his book, Zen states his “conviction” that “the Ostpolitik of the officials of the Roman Curia undermined all the efforts displayed by the commission to help the Church in China.”

Pope Benedict also urged prayer specifically for the Church in China. He declared May 24 each year as “an occasion for the Catholics of the whole world to be united in prayer with the Church which is in China.” It is the day that the Catholic Church commemorates Mary as “Our Lady, Help of Christians.” As such, the late pope noted, she is venerated with “great devotion at the Marian Shrine of Sheshan in Shanghai.” Apart from Pope Francis, who endorsed it, this prayer intention is virtually ignored by the Vatican and national bishops’ conferences. Responding to a request by President Cardinal Charles Bo of the Federation of Asian Bishops’ Conferences, a private, informal network of international Catholic legislators has worked to see the date observed, with resources at the website Global Prayer for China.

Cardinal Zen will make the 13-hour trip home this weekend, to comply with a Hong Kong court order to return for an investigation into whether he “colluded with foreign forces” under the vague national-security law (and under the same provision applied against Hong Kong pro-freedom entrepreneur Jimmy Lai). Zen’s brief reappearance on the world stage this week was a reminder of Pope Benedict’s deep attention to the Church in China during his papacy. But it also was a dramatic statement, which he withheld while serving as pope emeritus. It was an unmistakable rebuke of the Vatican’s China policy and its shabby treatment of Zen under Benedict’s successor.