In the midst of a raging heroin epidemic, Americans just got more bad news: Colombian cocaine production jumped from 250 metric tons (MT) in 2014 to 420 MT in 2015—a 68 percent increase in one year for the nation supplying 95 percent of the cocaine in the United States.

This is the latest dangerous failure caused by the Obama administration’s willful neglect and mishandling of U.S. drug policy both at home and abroad.

The White House quietly released the new 2015 estimate late Monday showing the historic increase. Even more sobering is the trend: 2015’s estimate marks a 155-percent increase in cocaine production from the low point of 2012. That low was the result of over a decade’s worth of hard-won success resulting from a strong U.S.-Colombian partnership—a partnership that now appears to be unraveling.

As Colombia supplies ninety-five percent of America’s cocaine according to the White House, it is now likely that availability and potency of cocaine in America will continue to rise as well, and prices decrease. Experience shows the combination of those three variables has usually resulted in more users, more addiction, and more death. With communities already reeling across the nation from an eight-year, 440-percent increase in heroin overdose deaths, our public health and safety personnel are ill-prepared for another blow.

The Colombian increase is not surprising to those paying attention. Uninformed rhetoric that “nothing works” in stopping the flow of illegal drugs is directly contradicted by recent experience. Cocaine is, in fact, one of the clear, recent examples of source-country success leading to reduced domestic use. Just in the past decade, working with our Colombian partners, we demonstrably reduced the supply of cocaine, and to great effect. 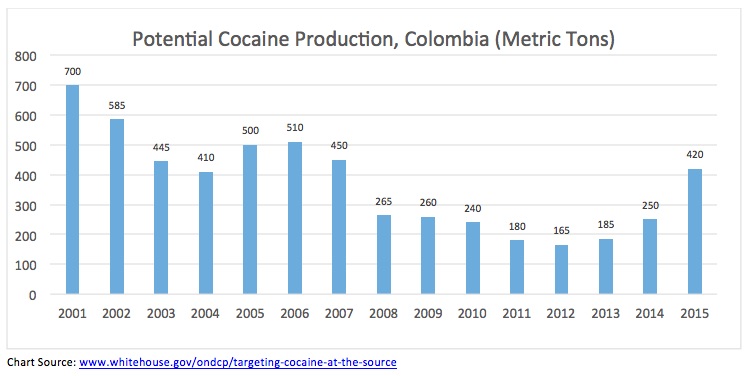 But those gains are now evaporating as a result of failed American leadership and fading resolve by our Colombian partners. The aerial eradication program, which drove the declines, was halted in the first half of 2015. Sustained spraying and manual eradication efforts, which resulted in a record 225,000 hectares eradicated in 2008, atrophied to just 67,000 hectares in 2014. In 2015, the White House reports no eradication numbers.

In a New York Times article about the decision to stop aerial eradication, Rafael Nieto, a former Colombian vice minister of justice, foresaw the result we see today:

If the spraying is stopped, the income of the drug traffickers, the criminal gangs and the guerrillas will go up substantially and so will the number of dead and wounded. Coca and cocaine production would also go up, and there would be more addicts and more people will die.

This was all predictable and it is also very likely that cocaine cultivation will continue to expand across Colombia, fueling political instability there and addiction and death in America. President Obama’s “21st Century Drug Policy” has been a manifest disaster for Americans and for our hemisphere.