The results of a Gallup survey released this week reinforce the message from several recent national monitoring instruments that use of marijuana by American adults is surging. From seven percent reporting regular use in 2013, the figure has nearly doubled to 13 percent answering in the affirmative in 2016, complementing a recent federal survey that reported a doubling for the 2001-2013 period.

The American drug-using landscape is changing rapidly, and not for the better. While some of the increased prevalence reported in recent surveys may represent a greater willingness to acknowledge use in an environment of state-level legalization efforts (marijuana use is still, at the federal level, illegal behavior), surely some of the increase, unprecedented over such a short time, represents real behavioral change. Long-held and beneficial American norms against drug use appear to be collapsing.

Gallup further offers some insights regarding the most likely users, noting a correlation with low religious engagement. Finally, yet a third recent survey provides even greater detail on who now uses marijuana the most, and where they are found.

These latest data on marijuana use and perceptions of risk, based on pooled data from the National Survey on Drug Use and Health (NSDUH) produced annually by the Department of Health and Human Services, provides not only state-level data for prevalence of marijuana use for 2012-2014 but a look inside various regions within the states that differ substantially.

Moreover, those data also provide insight on how the change likely came about—passage of so-called “medical marijuana” measures seem to auger for subsequent high rates of use (including “recreationally”) in states that have adopted them.

While this evidence is compelling, there may be a bit of a chicken-and-egg problem, as many of the states that passed marijuana measures had relatively high rates of use at the time that the measures were adopted; they seem to have increased even more since, but the data are equivocal. It remains possible that high rates of use are both a cause of marijuana liberalization policies, as well as a reflection of liberalization’s impact.

That said, the political savvy of the marijuana legalization movement, introducing so-called “medical” measures first as an inducement towards a slippery slope of full legalization, appears to have worked, given the sharp decline in perceptions of risk (see below) in use of the drug that seems to accompany its normalization. As well, they fostered the false perception that marijuana is somehow an effective and safe medicine. This political maneuver, while manifestly injurious, has proven all too effective for those pushing a pro-marijuana agenda.

And where are the highest rates of drug use? Everybody knows that Colorado, among all states, has high rates of intoxicant use. In fact, Colorado in 2014 had the nation’s highest state-level marijuana prevalence at 14 percent, compared to the national average of 7.73 percent. Even more striking, for marijuana, cocaine, non-medical opioids and alcohol use, Colorado is now the only state with a populace categorized as “heavy consumers” of all four substances.

The state’s passage of legalized, commercial marijuana sales has apparently made a substantial contribution to this dubious achievement.

But beyond state-level comparisons, we also have a revealing look at other factors associated with high drug use. Among the four major regional breakdowns, according to the NSDUH, regular use of marijuana is highest in the West (9.7 percent of the population 12 and older), and lowest in the South (6.4 percent). The chart below maps the sub-state rates of current marijuana use according to the 2012-2014 findings in the NSDUH. 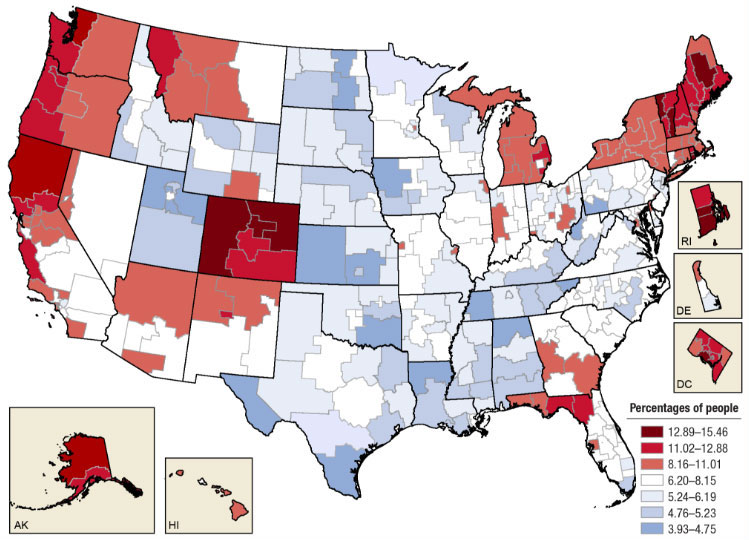 Further, within California, another “high” rate state, prevalence is more pronounced in the northern half of the state, including San Francisco, which, at 15.5 percent, has the highest sub-regional rates in the nation, double the national average. The nation’s lowest rate was found in southern Texas at 3.9 percent.

The NSDUH data also tell us about whether people perceive a great risk in regular marijuana use, which is seen as a leading harbinger of use patterns, with a strong correlation between the two. Miami-Dade County in Florida had the highest perception of risk (thought to be protective against use) at 49 percent. Conversely, the country’s lowest risk perception, at 14 percent, was found in the District of Columbia, specifically, Ward 3, home to traditionally liberal communities such as Chevy Chase, as well as American University.

The attitudes of this population may reflect their more benign assessment of drug dangers compared to others, likewise a possible consequence of “medical marijuana” acceptance. Nonetheless, this point of view is contradicted by actual medical literature reports attesting just the opposite.

For instance, the sharp increase in marijuana use disorder, disastrous risk for the psychological health of young users, the negative social and economic impact from use, an association with early death, and the recent summary warnings from the United Nations (UN), the National Institute on Drug Abuse (NIDA), and the World Health Organization (WHO), all demonstrate considerable risk, indeed.

Alternatively, Ward 3 population may simply not be attuned to the actual facts, relying instead on mainstream media, which tend to dismiss scientific warnings of marijuana’s manifest dangers in a way they would rightly never do with negative reports about tobacco. Given the rapidly collapsing cultural norms against drug use, this negative contribution by media may be consequential, whether reflecting actual intent or merely irresponsible ignorance.

When Did Progressive Elites Turn against Democracy?

Fentanyl as a Chemical Weapon

David Asher appears on the Brett Winterble Show to discuss China's use of fentanyl as a chemical weapon against the US....