Earlier this week, Chinese Communist Party General Secretary Xi Jinping lamented the “unavoidable impact” of the coronavirus and admitted the country’s social and economic system “can’t be paused for long.”1

The Communist Party is clearly worried. The coronavirus has become an issue at a time when Xi’s government has spent years engaging in a high-risk, high-cost approach towards national growth and the accumulation of national power. Chronic overinvestment, unregulated credit and a highly leveraged shadow banking sector have resulted in an economy that relies on a high GDP growth rate to stave off a financial crisis.

While China was already suffering a structural slowdown, the specific and deeper economic impacts of the virus remain to be seen. According to official figures the Chinese economy, the second largest in the world, was growing at around 6 percent per annum just before Covid-19 took hold in mainland China. The PMI figure which is a measurement of manufacturing activity dropped to a record low 37.7 in February. The figure was 50 at the beginning of 2020 which indicates neither growth nor contraction.

In China’s Economic Slowdown: Root Causes, Beijing’s Response and Strategic Implications for the US and Allies, published by Hudson Institute, I examined the origins of the Chinese economy’s structural slowdown and possible social, military, political and fiscal implications for the People’s Republic of China.

China must maintain high levels of growth to ensure that:

While the coronavirus is enormously disruptive, some have argued that it will be a one-time event that does not alter the general nature and direction of the Chinese economy. There is no doubt, however, that the virus has made it even more difficult and troublesome for the regime to manage China’s slowing economy. Exogenous and temporary shocks like the coronavirus can have longer-term psychological and economic impacts for a political economy that is already vulnerable.

At a time when China is battling the effects of a public health crisis and pre-existing structural problems, here are a few key indicators of acute anxiety and panic by Chinese authorities in response to a slowing Chinese economy:

A. Sudden Growth of Corporate Debt and Banking Assets

Since 2008–09, China’s corporate debt buildup has been possibly the most rapid in relative and absolute terms in peacetime economic history. China has been in a process of deleveraging its corporate sector since around 2016 to prevent a financial crisis caused by unmanageable non-performing loans, or else a growing debt and interest burden that presages a long-term economic malaise, as occurred in Japan in the 1990s and 2000s.

Any sudden increase in corporate debt growth is likely to indicate that Beijing is ordering an immediate short-term fixed-investment stimulus to maintain revenue growth for Chinese firms, which need this growth to manage existing debt.

This is already occurring. An example is Beijing’s announcement in late February that Chinese state-owned banks have been ordered to provide more low-interest loans to companies via a 300 billion yuan special relending fund.2

Another related indicator is whether there is a spike in banking assets, since such assets reflect an increase in credit to corporations (i.e., a bank loan is counted as an “asset” unless that loan is written off).

Even an authoritarian government cannot force households and individuals to consume products and services. The easiest and most direct way for the regime to stimulate growth in the short term is to lean on state-owned firms to invest in fixed assets or force them to do so.
China has had over-investment in fixed assets for more than two decades, and growth in such investment has been declining for prudential and commercial reasons, as illustrated in Figure 1.
Any sudden increase in infrastructure or real estate investment will be political or else policy driven rather than market driven. 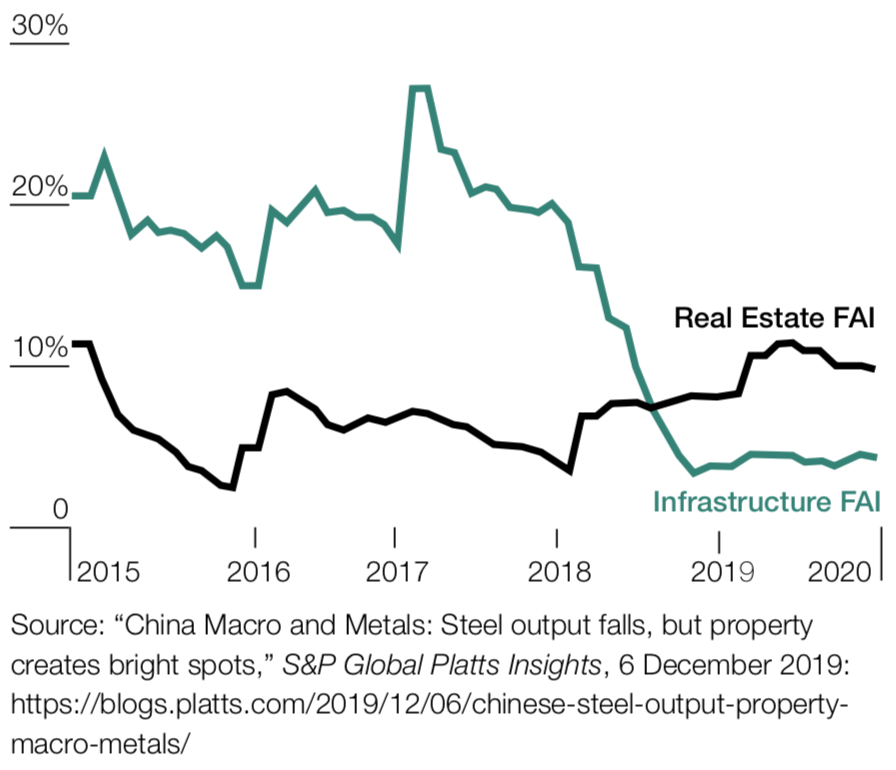 C. Dramatic Increase in Issuing of Local Government Bonds and in the Level of Defaults

Flooding the system with cheap credit is another way to increase the prices of assets such as real estate, helping local governments to increase their revenue.

However, given that the Chinese system is already heavily leveraged, local governments—which are already the largest domestic bond market in the world—might be forced to rely increasingly on issuing bonds, which are largely purchased by state-owned-enterprises.

In the short-to-medium term, watch for defaults in bond repayments, especially by local governments. If they occur, this means that any actions by Beijing to boost credit in response to a slowing economy have not worked, and that bond issuers (including local governments) are struggling to meet their obligations in a slowing economy. As Figure 2 illustrates, China’s onshore bond delinquencies have increased drastically in the last two years.

This is the biggest political test for Xi in recent times because many are blaming his hyper-centralized system of governing and power for failure to contain the coronavirus.

The mayor of Wuhan claims that he needed the central government’s permission to approve release of information and warnings about the virus in the earlier stages, and that this was not forthcoming.3

Since then, Xi, under pressure, has sent Premier Li Keqiang to Wuhan to ensure that the central government is seen to be responding with the appropriate level of urgency and decisiveness. Li also heads the party’s task force to manage the pandemic.

Domestically, blame is also shifting away from individuals and government to China’s authoritarian system more generally. It is obvious that the lack of openness and transparency contributed to the spread of the coronavirus, as controlling messaging and suppressing dissent took priority over containment early on.

Xi cannot appear too intolerant of the airing of views and blame by Chinese officials, media, and citizens. At the same time, the regime is loath to allow open and free expression of dissatisfaction.

Under different circumstances, we might have marveled at China’s ability to construct a 1,000 bed hospital in ten days as occurred in Wuhan in early February. Instead, Chinese citizens and much of the world are lamenting the death of 34 year old doctor Li Wenliang who was detained and warned for “spreading false rumors” in January when he was simply warning colleagues about the seriousness of the coronavirus. Since his death, Li is being remembered as the brave individual who was punished by an insecure Communist Party more intent on controlling messaging and silencing dissent than preventing a pandemic when it could have been contained.

As Chairman of Everything, Xi Jinping gets the praise when things go well and will suffer condemnation if the opposite occurs. We need to watch closely what happens if the coronavirus is not contained over the next few weeks.

Addressing the United Nations last week, President Joe Biden recommitted to arms control. "No matter what else is happening in the world," Biden said...

On her trip to South Korea this summer, US Treasury Secretary Janet Yellen touted “friend-shoring,” the practice of moving critical parts of the s...