Last year was a turning point for India-China relations. In the Galwan Valley of Ladakh in India, clashes between Chinese and Indian troops left twenty Indian and four Chinese soldiers dead and at least 76 Indian soldiers injured. These were the first fatalities along the border since 1975. Despite the majority of Chinese troops withdrawing from the Indian side in February 2021, the incident raised an important question for India: if India continues to cooperate with the US, Japan, and Australia as a member of the Quad security framework, will China increase military pressure toward it in response? And if so, should India distance itself from the Quad?

To answer that, two additional questions are relevant. If India stops its cooperation with the Quad, will China stop its incursions in the India-China border? And is the Quad beneficial for India?

The Quad was active in 2007 but not between 2007 and 2017. If its cooperation was what influenced China’s assertive behaviour, then the figures should have indicated lower Chinese activity during the 2007–17 period. But that did not happen. This shows that Quad policy and China’s activities are not directly linked. Even if India were to stop its cooperation with the Quad now, it is unlikely that China would stop its incursions in the India-China border area. 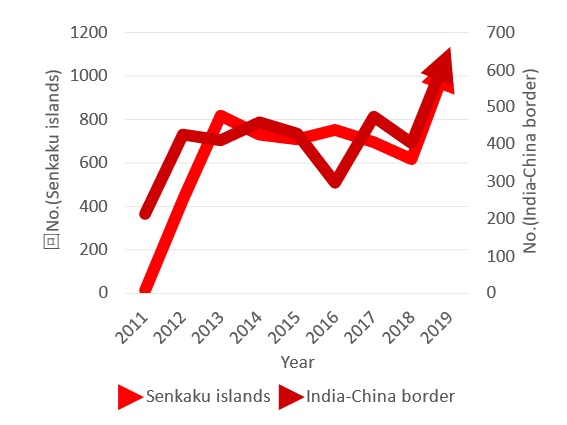 As to the related question of whether the Quad is beneficial to India, we can judge its merits from three perspectives: strategic, military, and political/economic.

First, the Quad is beneficial for India strategically because it has the potential to impose order in this region. The Quad member countries—India, Japan, Australia, and the US—are the four most influential powers in the Indo-Pacific region, with the exception of China and the ASEAN nations. In the past, Europe was the center of world politics. But the Indo-Pacific region is increasingly emerging as a far more influential region in world politics. Coalitions of influential powers in the Indo-Pacific such as the Quad are very important for creating order and stability, and India’s continued membership can play a part in that.

Second, the Quad has the potential to deter Chinese aggression in the India-China border area. For example, Quad participation can strengthen India’s defence capability around the India-China border. After the Galwan Valley incident, India and China increased their troop presence and continued to face off during a harsh winter season in the 5,000m-high mountains. The US exported not only winter combat coats to India, but it also sold military equipment, including C-17 and C-130 transport planes, AH-64 attack helicopters, M777 airlift-capable ultra-light howitzers with precision guided ammunitions, and Ch-47 transport helicopters that can operate at high altitudes like those in the India-China border. The US also exported P-8 anti-submarine patrol planes that are useful to check China’s activities in the India-China border because of their good radar. Along with this equipment, infrastructure projects also enhanced India’s defense capability. Since 2014, Japan has invested in infrastructure projects in Northeast India. Despite the projects being outside of the border areas like Arunachal Pradesh, road construction projects connect India’s mainland to the border area and allow Indian troops to enter it more easily. Japan could do more to help Indian connectivity in the future.

Moreover, China now faces increasing pressure from the Quad’s growing military capabilities, and therefore its military must face east as much as it has to face west. Currently India, the US, Japan, and Australia are all planning to possess 1,000-2,000 km long-range strike capabilities such as cruise missiles or new long-range bombs for their fighter jets. In the last quarter of 2020, India conducted a slew of missile tests, such as the extended-range BrahMos missile, the Shaurya missile, the Nirbhay missile, and the HSTDV (which is a supersonic vehicle system for missiles with scramjet engines). If India deployed these missiles, it could attack strategic roads, tunnels, bridges, or airports in mountainous Tibet. Japan and Australia also plan to possess joint-strike missiles (JSM), joint air-to-surface standoff missiles (JASSM), and long-range anti-ship missiles (LRASM). Japan plans to extend its domestic development of anti-ship missiles with a range of 1,000-2,000 km. If all the Quad countries possessed such long-range strike capabilities, China would be preoccupied with defending multiple fronts and could be discouraged from launching aggressive actions.

Third, India receives political and economic support from other Quad members. By making public statements opposing China’s acts of aggression, the other Quad members draw global attention to what is happening along the India-China border, increasing international support and legitimacy for India’s position. In March 2021, the Quad leaders held a summit for the first time, during which they agreed to set up working groups looking at areas of cooperation including vaccine production, climate change, and critical emerging technology. This indicates that the Quad is expanding its scope and that it has the potential for real strategic cooperation.

Overall, the Quad is beneficial for India, and its membership in the alliance will not worsen the problem along the India-China border. In fact, further tensions along the border will only lead to an even greater institutionalization of defence capabilities among the Quad members.

Read in The National University of Singapore

Transcript: The Arc of a Covenant: A Conversation with Walter Russell Mead and Michael Doran

Believing Jews Control Everything is a Moral, Intellectual Deficiency

Russia Can Still Be Defeated, but Time Is Running Out

Can Kasapoğlu discusses how the US can help Ukraine win the war against Russia provided the US acts quickly...