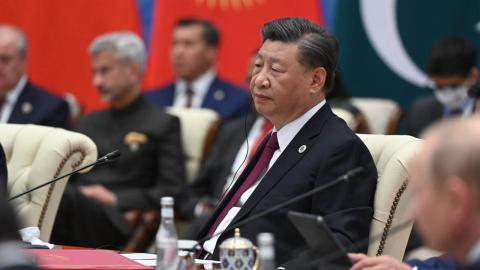 The Biden administration’s focus on the Indo-Pacific, coupled with the withdrawal from Afghanistan, has been interpreted by China as well as by many in the region as the United States downgrading Central Asia in its list of foreign policy priorities. The US has taken no major initiatives in South and Central Asia, apart from continuing to develop relations with India. US ties with India are also often subsumed in US Indo-Pacific strategy instead of being aimed at recognizing Indian pre-eminence in South and Central Asia.

On the other hand, China has expanded engagement with Central Asia, using SCO as the principal vehicle for projecting influence in the former Soviet states in Central Asia and working with their critical neighbors, including India, Pakistan and Iran. Central Asia is critical to China’s plans for securing all its borders, for continued access to critical natural resources and for a land bridge to Europe.

China is the largest trading partner of the Central Asian states and China’s joint military exercises and defense sales to the region have also increased over the years. The Belt and Road Initiative (BRI) was launched in Kazakhstan in 2013 and President Xi Jinping’s first post-COVID-19 pandemic foreign visit was to Kazakhstan in September 2022. Chinese strategy seems to be to step in wherever it sees an opening created by the lack of interest or capacity by other major powers.

For instance, China took advantage of American preoccupation with the war on terrorism during the first two decades of this century to deepen its influence in Southeast Asia. China’s calculus also seems to be that Russia’s economic weakness, which predates the Ukraine war, will lead to further weakening of Russian influence in Central Asia. The energy and natural resources of the Central Asian states are a key factor behind China’s strong presence across the Central Asian landmass primarily through infrastructure projects.

Russia was, for several years, the key security and economic partner of the Central Asian republics even after the breakup of the Soviet Union. But over the last decade, China has become Central Asia’s trade and investment partner of choice while security relations with Russia have remained strong. China’s combined trade with the five countries in Central Asia stands at $44.6 billion, almost half of which represents trade with the region’s largest country, Kazakhstan.

In January 2022, Kazakhstan’s President, Kassym-Jomart Tokayev, turned to Russia for help when he faced violent protests. Kazakhstan recently hosted military drills of the Russian-led security bloc, Collective Security Treaty Organization (CSTO), at the end of September. But recently 98,000 Russians were allowed to cross the border into Kazakhstan to escape President Putin’s partial mobilization of reservists for the war in Ukraine.

Kazakhstan (and other countries in the region) is clearly looking to balance its ties with Russia with relations with China and the United States. The US needs a clear plan to ensure that a region that was for a long time under Russian influence does not fall under Chinese hegemony.

This requires intensive, high-level American engagement with the Central Asian countries, including efforts to build a diplomatic alternative to the SCO. The US could expand its influence in Central Asia by working with partners like India.

Just like the West Asia Quad, now known as I2U2, which comprises the US, Israel, UAE and India, there could be a grouping of Central Asian states, India and the US that might initially focus on cooperation in the fields of technology, counter-terrorism and energy. India’s enhanced engagement with the Central Asian republics, its relationship with Russia and its historic rivalry with China make it an ideal US partner in winning over the region.

The US may be eager to move beyond Afghanistan, but Central Asia’s former Soviet republics face security threats, from the return of the Taliban to Afghanistan, the spread of Islamic State-Khorasan Province (IS-KP) and the continued presence of Al Qaeda. While the US has over-the-horizon capabilities and can target terrorists from afar (as was shown in the killing of al Qaeda leader Ayman al Zawahiri) working with Central Asian states would enhance American counterterrorism capabilities.

US foreign policy discourse often focuses too narrowly on current issues, ignoring the long-term. Washington is right now focused primarily on denying Russia influence in Europe and keeping China from dominating the maritime Indo-Pacific. But while doing so, the US should not ignore the likelihood of China stepping into the vacuum on the steppes, mountains and deserts of Central Asia.