India Is Critical to Deterring a Chinese Invasion of Taiwan 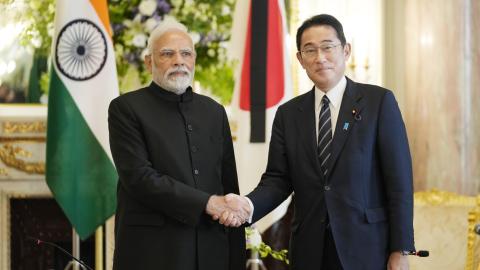 The Quadrilateral Security Dialogue, also known as the “Quad,” is a security framework that includes Australia, India, Japan and the US It was launched by former Prime Minister Shinzo Abe before his assassination, and it has become a core part of the strategy to counter China. Among the four members, India is considered to be the most out-of-step, especially when it comes to military matters. Nonetheless, India would play a crucial role in one of the most serious security challenges the Quad could face: a Chinese invasion of Taiwan.

Even if China invades Taiwan and the US, Japan and Australia must fight to defend it, India is unlikely to join. India has two aircraft carriers, for example, but it is unlikely to dispatch them to defend Taiwan. So far, the carriers have visited Sri Lanka and Maldives on friendship visits, but New Delhi has not dispatched them to countries further abroad.

Indian Navy destroyers have made port calls in Japan more often, and Indian submarines are deployed in the South China Sea. However, while India participated the November 2022 “Malabar” joint exercises with the US, Japan, and Australia, it did not join them and the UK in the “Keen Sword” exercises that simulated a Taiwan crisis. Both joint exercises happened near Japan at nearly the same time. India’s restraint indicates that one should not expect it to join a war to defend Taiwan.

Despite this, India will be vital in defending Taiwan for three reasons.

China cannot mass its military resources if it needs to devote a significant share to guarding against India, meaning that Beijing would not be able to concentrate these resources on Taiwan. For example, if there is tension along the India-China border, China will likely allocate more spending and assets there to hedge against India. This reduces the spending and assets used for Taiwan.

These things have happened because China raised tensions, but the Indian and US reactions have succeeded in pressuring China. It is possible that China cannot concentrate its forces on a Taiwan invasion because of this situation.

India is also important in preventing an invasion of Taiwan for economic reasons. If China invades Taiwan, Beijing will need to anticipate the reactions from the US, Japan, Australia, and other countries. In this case, the degree of economic dependence on China among these countries will be a key factor. For the US, Japan, and Australia, China is a top-level trading partner.

The three countries need to change this situation. To do this, they need to find an alternative market that is not dependent on China and strengthen their supply chains such that they do not rely on China. In this case, India can be the key to the counter-China strategy.

Originally, the Trans-Pacific Partnership (TPP), as suggested by then US President Barack Obama, was intended to be an economic framework to counter China. In 2015, he said clearly that the United States, not China, must write trade rules. Unfortunately, the US withdraw from the TPP under former president Donald Trump, and the Biden administration has not moved to rejoin the pact. Instead, the Biden administration has proposed the Indo-Pacific Economic Framework (IPEF).

These economic frameworks need three conditions to work as a counter-China strategy: They must exclude China, enable the US to show leadership, and be large enough to act as an alternative to the Chinese market.

When it comes to market size, including India is key. In 2023, India will surpass China to become the world’s most populated country. On top of that, India’s gross domestic product (GDP) will within a decade exceed that of Japan, making it the third biggest economy in the world. The country has many undeveloped resources, including rare earths. As a result, like other manufacturers, Taiwanese companies have focused on India, announcing plans to open semiconductor factories there. These will be the first large-scale semiconductor projects in India. Countries around the world will reduce their dependence on China if the Indian market develops well.

If the US, Japan, and Australia strengthen their relations with India and reduce their dependence on China, they will be able to take a stronger stance toward Beijing without worrying about the economic impact. If China expects a firmer response from the three Quad members, it will be more difficult to invade Taiwan.

India is also important in deterring a Chinese invasion of Taiwan because its attitude can raise the island’s international status. Currently, India’s defense budget is the third largest in the world, and its GDP will become the third largest. If India supports Taiwan and sufficiently raises Taiwan's status, it will be more difficult for China to invade.

Originally, China viewed India as a supporter of its One-China Policy. Just after the Chinese Communist Party integrated the continental side of present-day China, India established formal diplomatic relations with Beijing and cut ties with Taipei. However, that attitude has changed. In 1995, India restarted relations with Taiwan, and 2008 was the last year that India’s government documents clearly mentioned the One China Policy.

This change has accelerated under Prime Minister Narendra Modi. For example, in 2014, then External Affairs Minister Sushma Swaraj said, “When they raised with us the issue of Tibet and Taiwan, we want they should understand and appreciate our sensitivities regarding Arunachal Pradesh.” Without China accepting India’s claim, India will not accept China’s claim, she said.

After tensions along the India-China border were raised in the spring of 2020, India went one step further. In May 2022, two Indian members of parliament and the de facto Indian “ambassador” to Taiwan joined the online ceremony for the second-term inauguration of Taiwanese President Tsai Ing-wen. This was a major change, because the Modi government did not send members of parliament to Tsai’s first inauguration in 2016 after initially considering it. Chinese troops killed at least 20 Indian soldiers and injured 76 on the India-China border in June 2022, one month after the second ceremony.

India’s move toward exporting arms to Taiwan also indicates that its attitude is changing. In 2018, along with the US and Japan, India planned to join Taiwan’s domestic submarine development program. In the future, India, not only the US, Europe and Japan, will promote greater cooperation with Taiwan. That will raise Taiwan’s international status, making it more difficult for China to invade.

Based on the aforementioned points, although India will not join military operations to defend Taiwan, it is vital to create the international conditions that would make a Chinese invasion more difficult. That is why the US, Australia and Japan should cooperate with India to support Taiwan.