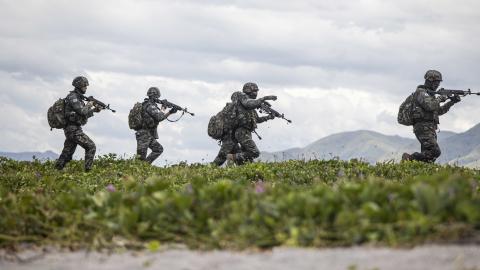 Caption
Korean Marines take part in joint exercises with Japanese, American, and Philippine troops in the Philippines on October 7, 2022. (US Marine Corps photo by Danny Gonzalez)

While plans released last month by Tokyo promise significant upgrades in Japan’s Self-Defense Force, their primary strategic intent is to nullify North Korea’s mounting nuclear and missile capabilities and preserve peace, especially in the East and South China Seas and the Taiwan Strait.

Kim Jong Un ended an unprecedented year of testing more than 100 missiles by sending drones toward Seoul and vowing a significant expansion of missile, space, and nuclear capabilities. Meanwhile, China has resorted to reckless military maneuvers to intimidate Taiwan and alter the status quo through the threat of force. Beijing’s increasing assertiveness is especially worrisome in light of its partner Russia’s brutal invasion of Ukraine.

Prime Minister Fumio Kishida’s modernization blueprint may be transformational, but it is linked to a rapidly changing regional security environment.

Far from threatening to bomb the Korean peninsula without Seoul’s approval, Japan’s attempt to add credible offense to an overly defense-weighted set of military capabilities will enhance deterrence for South Korea and Japan. For instance, the acquisition of Tomahawk cruise missiles and indigenous counterstrike capabilities will put would-be attackers on notice that aggressors will be penalized. But the plans require Tokyo and Seoul to advance security cooperation to minimize the risk of misunderstanding and maximize the potential for deterrence.

President Yoon Suk-yeol’s determination to restore relations with its neighboring democracy has laid the groundwork for preserving regional stability. The decision to share early-warning data to help defend against a possible North Korean missile launch represents a necessary building block toward closer cooperation between South Korea and Japan and among Seoul, Tokyo, and Washington.

Those with malign intent may seek to portray any Japanese offensive capability as signs of rising Japanese militarism and American decline. They should instead see democratic powers determined to demonstrate the sufficient political will to keep the peace and help shape a regional and global order in flux.

For decades the United States provided the sword of surpassing offensive firepower while Japan focused on the shield of defending its territory and supporting US forward-based forces.  A gradual shift in regional military forces and the distribution of power globally requires adjustments. Paradoxically, to keep America’s extended deterrence commitment to treaty allies like Japan and South Korea, prosperous allies must contribute more to their defense and regional security.

This explains Japan’s pledge to increase defense spending toward the NATO standard of 2 percent of GDP. Japan is politically divided about how to pay for some $314 billion in defense spending over the next five years. But even if fully enacted, the result would mean Japan’s annual defense budget would rise from roughly $50 billion to about $80 billion. Although that is a serious commitment, Japan’s defense spending would still amount to less than 10 percent of the current US defense budget and a fraction of China’s military and security spending.  South Korea will continue to outspend Japan as a percentage of its economic output.

Further, the Yoon administration has embarked on a South Korean transformational strategy, as outlined in his recently released Indo-Pacific strategy. A stronger Japan will reinforce South Korea’s bid to stake its claim as a global pivotal state. Seoul should assert more influence over rising geopolitical competition rather than fixating on a North Korean regime unlikely to engage in serious diplomatic talks in the foreseeable future. Similarly, Seoul’s political will to shoulder more significant burdens for regional security will benefit Tokyo and Washington, and other like-minded actors committed to a rules-based order.

Another way to understand Japan’s defense ambitions is to peg it to where China’s and North Korea’s military capabilities will be in five years. In short, Tokyo’s defense increases are intended to prevent Tokyo from falling further behind Xi Jinping’s buildup of the Communist Party of China’s People’s Liberation Army and Kim Jong-un’s asymmetric missile forces. The intent is to deter even the threat of force that would deny Japan its essential sovereignty and strategic autonomy.

Viewed through the prism of Northeast Asian security and the lenses of the Indo-Pacific region and complex global challenges, Japan’s new defense plans reinforce South Korea’s national interests. South Korean interests can be best advanced by greater investment in its security and closer cooperation with Japan and the United States.

Read the original Korean article in the Dong-A Ilbo.