The Chip War with China Is Just Getting Started 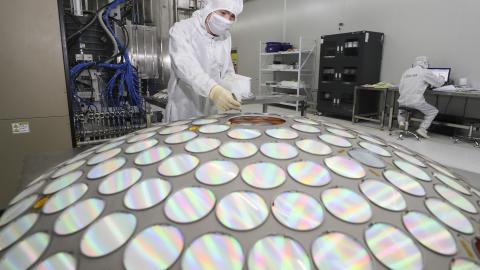 Caption
An employee works on the production line of LED epitaxial wafer on March 25, 2022, in Jiangsu, China. (Photo by Zhao Qirui/VCG via Getty Images)

Last week the Biden administration announced new restrictions on American companies selling advanced semiconductors to China, including restrictions on US citizens and residents working for chip plants in China. The impact on America’s most dangerous opponent since the end of the Cold War, was almost instantaneous. According to Bloomberg, Americans working in Chinese plants are already leaving. If ever there was a strategy to stop a high-tech rival in its tracks, this was it.

This strategy, however, is not original with the Biden team. When I was at the National Security Council, the Trump administration was using the Direct Product Rule, that can prevent companies anywhere in the world from selling products using US products or technology subject to export controls, to slow Chinese telecom giant Huawei’s attempt to take over the global 5G market. Now Biden is using it to prevent even allied countries like South Korea from selling advanced chips to Chinese firms or organizations engaged in AI and supercomputing activities.

I’ve written many times in this space how semiconductors are the building blocks of the modern digital economy, powering the internet and providing the foundation for critical technologies such as artificial intelligence, 5G, quantum, robotics, and autonomous vehicles. They are also an essential tool in our national security arsenal, animating every major weapon and defense system as well as their command and control architecture, including GPS and space.

I’ve also written how China is going full speed to build a world-beating microchip industry, to become the superconducting Colossus of the 21st century.

In this regard, there still remains the glaring problem of China’s aggressive moves toward Taiwan, the world’s manufacturer of 90% of high-end advanced integrated circuits. As my Hudson colleague Mike Pompeo and Vivek Ramaswami wrote in the Wall Street Journal, a disruption of Taiwan’s semiconductor industrial base could trigger a massive and protracted economic meltdown, one that would have a devastating impact on our semiconductor sector, as well.

But our overreliance on foreign sources for microchips, even from trusted allies such as Taiwan, Japan, and South Korea, is only part of a broader issue: America’s overreliance on global supply chains that are all too vulnerable to disruption, including in time of war.

Consider the materials needed for manufacturing semiconductors, including copper, aluminum, tungsten, antinomy, and gold. Chile has the world’s largest copper reserves, while China has been its biggest customer for years. China is also the world’s largest producer of aluminum, at 36 million tons. The US only rates number nine in the global producer ranking. China is also the world’s main supplier of tungsten; the third largest producer of tungsten is Russia, China’s ally.

There’s a similar story with China’s monopoly of materials for lithium batteries, the power source of all those electric vehicles the Bidens want us to buy; while China produces more than 95% of the world’s raw gallium, the metal used in making chipsets for electronic devices such as computer motherboards or portable phones.

All this isn’t meant to depress us about our chances of competing in the high-tech war with China. It’s an urgent call for a strategy for creating a reliable and secure materials supply chain for our reviving semiconductor sector—while spurring innovations that will make us less, rather than more dependent, on supply chains outside our control.

It’s about working with allies to make their supply chains less vulnerable, as well; and understanding the global stakes now centered in what could happen in the Taiwan Strait, involves more than invoking military power—important though that is. It requires a long-term focus on what we make at home and how we make it, and where its materials come from.

Today the US has become too dependent on global supply chains stretched around the world. We’re looking increasingly like Great Britain in World Wars One and Two. Despite Britain’s vaunted overseas empire, the island nation discovered that a determined enemy, namely Germany, could literally bring it to the brink of starvation by severing its far-flung supply chains for everything from raw materials for manufacturing to basic food and fuel.

Fortunately, Great Britain had a powerful ally to act as its supply chain savior, namely the United States. We don’t. It’s going to be entirely up to us and our politicians to restore our economic independence, from energy to the raw materials that are essential for a strong and secure high-tech economy.