Chipping Away at China’s Semiconductor Threats to the US Military 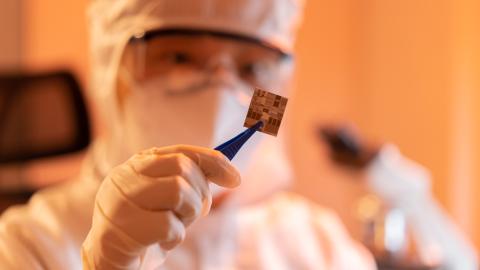 Now that House and Senate are resuming work following the elections, one of the top national security priorities for congressional action should be ending purchases of microchips for the US military from companies that work with the Chinese Communist Party (CCP). An amendment to the upcoming National Defense Authorization Act (NDAA) from Sens. John Cornyn, R-TX, and Senate Majority Leader Chuck Schumer appears poised to do just that.

Buying semiconductors for the US defense industry from the People’s Republic of China (PRC) is unacceptable. Semiconductors (commonly referred to as microchips or simply as "chips") have become the core currency of contemporary national power. As renown Tufts University Professor Chris Miller has written, we are living in a "Chip War" for global primacy.

The countries that control the most advanced semiconductors enjoy superior economic and military power. Modern weapons cannot function effectively without semiconductors. The most important component of modern weapons systems is their computing power.

One of the main reasons for the US victory in the Cold War against the Soviet Union was that the Soviet military-industrial complex could never match US computing power. Unfortunately, flawed US policies resulted in most semiconductor manufacturing migrating to lower-cost producers in Asia.

Today, Chinese leaders see their path to victory over the West as achieving primacy in microchip production. The current CCP strategy is to decrease China’s dependence on other countries in critical economic areas while making the rest of the world more dependent on China. Accordingly, the Chinese government has been spending billions of dollars to reduce its domestic dependence on foreign chips while increasing the world’s reliance on PRC chip supplies.

In addition to enormous subsidies and cyber-empowered espionage, PRC semiconductor firms benefit from their governments’ practice of ruthless exploiting the country’s vast market power – foreign companies pine for access to the large Chinese consumer market – to coerce these firms into transferring technologies to PRC companies and expand the use of Chinese inputs into their own production.

In any major conflict between China and the United States, PRC attackers would exploit the vulnerabilities they have discovered or planted in CCP-sourced chips in US defense industrial supply chains. The newly released annual report of the US-China Economic and Security Review Commission warns that Chinese investment in its offensive cyber capabilities, along with its capacious capacity for intellectual property theft, are creating a serious threat to US critical infrastructure.

Though relying on foreign supply chains for nonessential goods may be acceptable, semiconductors are too precious to depend on foreign supplies. Not only could critical providers exploit this vulnerability for economic or security reasons, but unanticipated natural events such as a major epidemic like COVID-19 can also rupture the receipt of imports.

Apple’s over-reliance on imported Chinese components for the manufacturing of iPhones has made the company’s production highly vulnerable to the CCP’s zero-COVID-19 lockdowns. Other US companies, such as those producing automobiles or providing health-related personal protection equipment, also have suffered from devastating Chinese supply disruptions.

The policy of retaining US military technological superiority over China enjoys bipartisan support in the United States, within both the Congress and the executive branch. In fact, last month, National Security Advisor Jake Sullivan affirmed that US policy is to maintain as much as lead as possible over China in the production and employment of semiconductors. Losing such an advantage to China will decrease the US capacity to deter PRC aggression and thereby increase the risks of a China-US war.

The CHIPS and Science Act enacted earlier this year provides important assistance for US-based semiconductor manufactures. Recently enhanced export controls have also succeeded in limiting Chinese companies’ access to the most advanced foreign chips. The next step is to curtail the flow of dollars to Chinese chip producers, which is what Cornyn and Schumer are seeking to ensure in the upcoming NDAA.

The federal government cannot afford to rely on chip suppliers with strong ties to the Chinese Communist Party given the risks that Beijing will exploit this vulnerability for cyber infiltration or attack. And with surging inflation, rising deficits, and escalating Chinese threats, struggling American taxpayers shouldn’t have to support the research, development, and manufacture of Chinese chips.