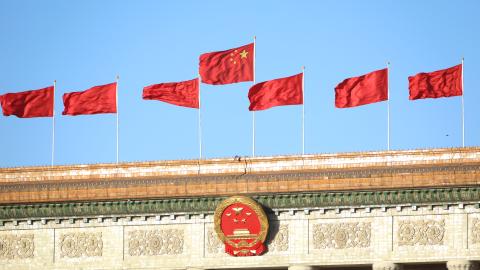 Caption
Chinese national flags on the Great Hall of the People in Beijing, China, on October 22, 2022. (VCG via Getty Images)

The Chinese Communist Party (CCP) has developed a magic weapon that complements its accumulation of material power: its success in shaping grand narratives in the Indo-Pacific region about China and America. The genius is that these narratives condition countries to accept Chinese policies meekly even if those policies oppose their national interests.

The magic weapon is a narrative buttressed by five basic messages:

1. Chinese dominance is the historical norm and is inevitable.

2. The objectives of the CCP are permanent and unchanging.

4. Beijing is prepared to pay any price to achieve its core objectives.

5. The US is an increasingly weak and unreliable ally.

Accepting these propositions greatly diminishes the motivation for regional states to resist or counter even the most coercive policies, even if we profoundly disagree with China’s behavior. Striking an uneven bargain becomes seemingly preferable to foolishly balancing against the future inevitable dominant power.

The power of these narratives for Beijing is that once we accept the five basic messages as a given, then the only reasonable action is for regional states (including American allies) to compromise and alter their objectives to maximize gains, avoid instability, and ultimately prevent war. The onus is then placed on America to step back or accept blame for the resulting instability.

America needs to engage and prevail in this space of grand narratives rather than vacate the ground, as it has largely done. There are six counternarratives for which ample evidence exists and which America should relentlessly advance:

1.    Xi Jinping and the CCP are engaged in a high-risk and high-cost approach to pursuing China’s growing ambitions abroad while concealing significant internal weaknesses and vulnerabilities.
These include the rapid accumulation of debt in the domestic financial system and the deteriorating capacity of local governments to fund public and social goods.

Despite its economic size, its economic tools and levers in the world are surprisingly limited in important respects. Even the resilience of its domestic economy is enormously vulnerable to American policies.

3.    Xi’s high-risk approach is causing immense angst. The more the public attributes failures to Xi’s actions, the more pressure he will face internally.

4.    The Chinese narrative that the United States is distant and therefore unreliable contradicts history. When Washington makes a decision, it is prepared to expend enormous blood and treasure to achieve its objectives and come to the aid of its allies. This same mindset still applies to America.

5.    America needs to actively contest the argument that a Sino-centric economic and strategic order will be benevolent and guarantee material benefits for all participants.
The evidence for this lack of benevolence is compelling. For example, Chinese industrial policies have contributed to a more than threefold increase in ASEAN’s trade deficit with China over the past decade. China is more a taker of technology than a source of it, unlike America.

6.    Chinese history is not one of benevolence and peace. Chinese empires have expanded and contracted through war and conquest. The “Middle Kingdom” is not a uniquely benevolent or unchanging entity. It is an expansionary power that will ultimately extend its influence through coercion and force if it can do so.

An Assessment of US and Allied Information and Influence Warfare

How to Engage and Prevail in Political Warfare against China