Why Are There So Few Arrests for Marijuana Violations? 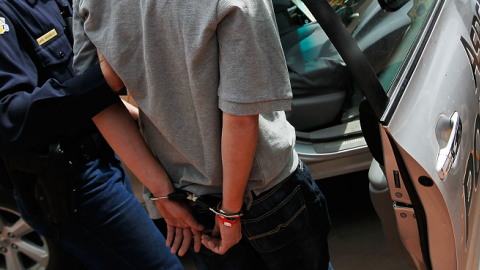 * RAND: __“In no Western country is a user at much risk of being criminally penalized for using marijuana.”__
* Arrests for marijuana are actually far fewer than the rates for other drugs would indicate.
* One arrest for 34,000 joints smoked.

A common criticism of laws against marijuana use and/or possession is that there are a disproportionately large number of marijuana arrests. In 2013, there were roughly 609,000 people arrested for marijuana possession, according to the FBI’s 2013 Uniform Crime Reports, the most recent year for which data is available.1 To many, this fact stands as an indictment of marijuana laws, under the presumption that the number of arrests is excessive, and hence must represent an injustice.

Further, the number of arrests is often mustered on behalf of the campaign to legalize marijuana—the logic being that the sheer magnitude of the arrest figures represents a failure of public policy which legalization would correct.

Moreover, the presumed excessive number of marijuana arrests is seen as an argument that police resources are being misdirected towards a drug that does little harm, at the expense of policing responses to drugs thought to be more dangerous, such as heroin or cocaine.

Lastly, the arrest figures feed into the assumption of many that marijuana arrests are disproportionately responsible for filling prisons with drug offenders, particularly low-level and non-violent ones. This is seen as an indictment of the drug war, and is said to represent an irresponsible expenditure of not only money but also criminal justice resources.

If only marijuana use were legal, the argument goes, this threat to public well-being—wasted police resources, needlessly overcrowded prisons, and injustice against innocent marijuana users—would be avoided. Under this argument, the laws against marijuana use pose the greatest harm to society, greater than the impact of the drug itself.

Do data actually support this position?

Let’s focus on the drug possession offenses (though the conclusions would not be affected materially by incorporating drug trafficking offenses). Not only are possession arrests the largest category of drug violations, they represent the class of offenses most affected by legalization proposals.

These two drugs are not further broken apart in the UCR. The remainder of drug possession arrests was for what the FBI terms “synthetic or manufactured drugs” (about 4.6 percent of drug abuse violations), and “other dangerous nonnarcotic drugs” (20.7 percent of drug abuse violations). Synthetics would include drugs like amphetamines, while drugs such as diverted Tramadol or so-called “date rape” drugs would be included in the “other” category.

Two facts complicate the argument that these data reveal the supposed injustice of marijuana laws producing disproportionate arrests, and are further filling the prisons with low level offenders.

According to a 2008 study by the Bureau of Justice Statistics of drug offense inmates, only 0.3 of one percent had low-level marijuana possession as their most serious offense (the study from 2008 is the most recent one available for this data point).3 Applying this figure to the 2013 data, the actual number would be about 631 inmates. Further, according to the BJS analysis, most of those inmates had “pled down” to the marijuana charge from more serious offenses.

Inmates in federal prisons, the smaller category, do have a larger percentage of drug offenders as a total inmate population than the state system, but more than 99 percent of federal drug offense inmates (as of 2010, the latest year for which these data are available) were convicted of drug trafficking charges.4 The status of such federal inmates would not be affected by legalization of marijuana possession.

The second fact complicating the portrait of marijuana possession arrests being “excessive” is the fact that there are vastly more marijuana users in the United States than there are heroin and cocaine users, even when the latter two figures are combined.

Combining that figure with heroin users to match the UCR category for arrests is a bit trickier. The NSDUH reports 289,000 past month heroin users, but certain analysts fear that many heroin users are not found in stable housing circumstances, and hence are undercounted in the NSDUH. An alternative method developed by RAND proposed measuring what they called “chronic” heroin users, using methods beyond the household survey. The RAND study estimated 1.5 million “chronic” users of heroin in 2010, and this figure is derived from a “modeled estimate.”6

By either calculation, marijuana arrests are not disproportionate to the magnitude of the problem; if anything, marijuana users are more likely to be ignored than persecuted.

There are complications to this argument that are technical and difficult to pursue here. Drug violation arrests are certainly a function of policing resources and priorities, as well as the circumstances of the drug use, and the frequency of “exposure” leading to risk of arrest.

Cocaine and heroin violations are commonly associated with urban environments, while marijuana arrests are found in urban settings and elsewhere, nationwide. Hence, there are different sets of policing resources for the two categories of drugs, as well as different policing policies concerning arrest priorities, perhaps reflecting as well collateral criminal acts attached to the drug use.

And what about exposure risk? According to a 2010 RAND study, there is yet another way to calculate the risk of arrest for marijuana users. RAND developed a “national consumption” estimate for marijuana in the U.S., arriving at a figure of 3,500 metric tons (MT) of marijuana consumed annually.7

The RAND estimate was what researchers call a “demand-based” estimate, in that it calculated the presumed number of users (prevalence rate) and then made assumptions about how much these users might have smoked on an annual basis.

The alternative is to focus on a “supply-based” estimate, which takes account of estimates of marijuana cultivation from known sources, linked with information about marijuana seizures (particularly border seizures), marijuana eradication (for domestic sources), and information about the marijuana criminal marketplace.

RAND’s estimate assumed an average joint at 0.4 grams, and estimated that a total of 8.75 billion joints of marijuana are consumed annually. Based on their assumption of 750,000 arrests for marijuana possession annually (as we have seen, a high figure), they estimated a risk of arrest per exposure through marijuana use.

They conclude that there is only one arrest for every 11,600 joints smoked. (Setting aside what is known as the Willie Nelson problem, which is the possibility that the same person may be arrested more than once, as well as obvious variations in the frequency and circumstances of use across populations.)

Problems abound with the RAND estimate, not the least being that their overall consumption estimate is, by the evidence of multiple sources of supply, very low. Supply-based estimates derived from marijuana cultivation known to be available in the U.S. (from Mexico, where the estimate is based on overhead imagery, from Canada, and from domestic cultivation sources, including estimates for indoor grows) provide figures that are at least triple the RAND figure of 3,500 MT of consumption (while other methodologies go even higher).

While marijuana consumption estimates are inherently imprecise, a more plausible risk of arrest per exposure, based on 10,500 MT of consumption, would be one arrest for every 34,000 joints smoked, if one accepts the 0.4 grams per joint figure from RAND.

Finally, as RAND notes, whether the disposition is jail or prison, “we can safely infer that most of those arrested for simple possession are not incarcerated at all.”8 Though the RAND analysis was focused on legal changes in California, they generalize the point to the international setting, declaring “that in no Western country is a user at much risk of being criminally penalized for using marijuana.”9

This realization may help us understand findings involving liberalized marijuana policies on crime rates. For instance, researchers comparing states that have enabled medical marijuana to those that have not often report no major difference in such offenses as drug crimes. Seen in the context of arrest risk, however, we can suggest that while these observations may be true, they are effectively trivial.

Since the actual risk of arrest for marijuana users is so low in any venue, the impact of liberalized access policies in one state will be difficult to detect in interstate comparisons. The impact of liberalized access policies on prevalence rates, however, appears to be consequential, especially since youth report that a major source (at least 30 percent, according to the 2013 Monitoring the Future study of 12th graders) of their illicit marijuana is a medical-marijuana card holder.

By whatever the precise calculus of exposure, of risk of arrest, or of consumption, two things are very clear. First, far from being disproportionately large and excessive, arrests for marijuana are actually far fewer than the rates for other drugs would indicate.

And second, legalizing marijuana use, while certainly increasing the damage to public health, will not produce the positive impact on criminal justice, either on the streets or in the prison population, that advocates blithely claim.

Meanwhile, the damage from marijuana use itself continues to escalate. We have elsewhere reviewed the current literature showing the dangers of the new, industrial-strength dope now being marketed throughout the country. In summary fashion, recent research has clearly established the striking mental health, cognitive, and behavioral consequences of regular marijuana consumption. The damage is significantly greater for chronic use by the developmentally young, or the already vulnerable, but it appears to affect even adult, casual users, and to follow a dose-response relationship.

The associations of heavy marijuana use include lowered IQ (estimated at an 8 point loss at adulthood), increased likelihood of psychotic incidents, memory and learning deficits, associations with delinquency, criminal behavior, a loss of motivation, and structural changes in the brain.

Marijuana benefits from the mythology that it is relatively harmless “kiddie-dope,” and that its impact is largely benign. Such false beliefs have driven the apparent acceptability of legalization, which solves none of the purported problems, while widening the devastation.

That is why we must conclude that the laws against marijuana possession, use, and trafficking, including the threat of arrest, the involvement of the criminal justice system in referrals to drug abuse treatment, and the presence of disincentives for youth use that provide a prevention deterrent, all serve the public interest.

The realization that a stunning political negligence, if not irresponsibility, on the part of the Department of Justice enabling and facilitating the steady march of marijuana legalization in the states, in clear contradiction of existing federal authorities, makes of current drug policy regarding marijuana a needless and self-inflicted wound upon the nation’s youth.