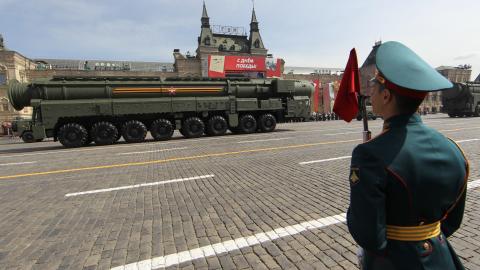 “The greatest threats to the free world do not arise from the possibility of a Soviet nuclear ‘bolt from the blue’ attack on the United States. For the present, the greatest threats are not posed by the contingency of a blatant attack on NATO. As Henry Kissinger was already pointing out in 1957, the greatest threats are likely to come in areas sufficiently important to be defended but just sufficiently marginal and inconvenient geopolitically that it may be difficult to marshal the free world resistance aggression against them. In such cases the possibilities of misperceptions and accidents may abound, and it is there that nuclear war may occur, arising out of a confused and unsuccessful conventional defense.”

O’Brien’s warnings hit close to home with Russia’s war against Ukraine, don’t they? The threat of nuclear employment is back in the national consciousness because Russia—a top tier strategic foe of the United States—was not deterred from launching a conventional war against a country which, while important to the security and stability of Europe, is not a US treaty-ally. Assessing the potential dilemma this would present to the Biden administration, Vladimir Putin used nuclear saber-rattling to deter the United States from doing more to strengthen Ukraine and continues to use the threat of nuclear weapons employment to coerce the United States and Ukraine’s Western backers to limit or end their support.

Small wars lead to bigger wars and so failing to deter an initial conventional conflict in a key region can lead the aggressor nation to threaten to be on the precipice of launching a nuclear attack. This is why it is imperative that the United States have an accurate assessment of both how this situation arose and how to get out of it while convincing Putin to maintain the nuclear taboo and ensuring Russia’s nuclear coercion is not rewarded by permitting it to gain territory or get other concessions.

The reality is that Russia’s February 2022 full-scale invasion of Ukraine is the largest failure of US deterrence since the Cold War. This is the conclusion I brought to a subcommittee on the House Foreign Affairs Committee in November.

But the Biden administration has not come to grips with this failure. During the early weeks of the bloody invasion, Congressman Mike Gallagher pressed Biden official Ms. Sasha Baker, Deputy Under Secretary of Defense for Policy, on whether she believed the United States successfully exercised “integrated deterrence,” the title of the Biden administration’s professed deterrence strategy that appears to rely less on sufficient military power and more on non-military tools.

Congressman Gallagher responded: “What you’re effectively saying is your entire theory of deterrence requires on a country getting invaded and pillaged in order to galvanize the West into action, and I just don’t want to put our eggs in that basket.”

And he is correct. Whatever the United States did, it certainly did not convince Putin that the cost of invading Ukraine would not be worth it. Nor has the United States, with our allies and partners, hitherto convinced Putin that he should stop the war and retreat to his own country.

Despite the occasional Ukrainian tactical victories, their grit, wit and ingenuity, the United States remains very concerned about how Russia might respond to Ukrainian success. According to the logic of the Biden White House, Russia may fly Iranian drones to kill Ukrainians, but if those bases are far enough away from Ukraine’s border Ukraine will be forbidden from hitting them.

There seem to have been Russian “redlines,” whether expressed by the Russians or speculated by the United States, that have prevented the United States from providing certain aid and operational leeway to Ukraine, for fear of Russian escalation. But eventually, slowly, each time Congress pressures the White House to do more for Ukraine, the White House relents, and incrementally provides more to the Ukrainians. It appears we are not headed to a gentle landing in all of this. I fear that as time goes on, Putin may get used to the idea of going down as the man who broke the eight-decade nuclear taboo.

It is too late to avoid the scenario that O’Brien captured in 1983. The Biden Administration was unwilling to utilize the tools at hand to compellingly deter Russia. Now, the faster the United States can support the bloc of NATO that is eager to equip and empower Ukraine to force the Russians to want an offramp, the better.