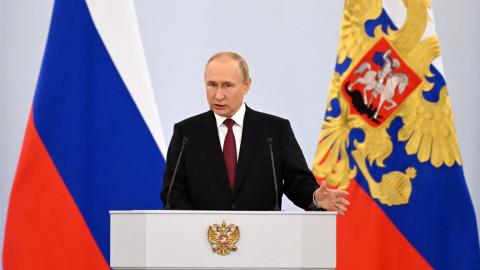 Even as poorly trained, poorly led and poorly supplied Russian forces retreat on the battlefield, the danger that the war in Ukraine will erupt into a wider conflict continues to grow. Vladimir Putin has responded to the weakening of his military position by “annexing” four contested regions inside Ukraine, declaring that the conflict in Ukraine is a war for the survival of Russia, and raising the specter of a nuclear strike. The West is taking note of these moves and the sabotage of Baltic pipelines connecting European consumers to Russian gas. National security adviser Jake Sullivan has warned Russia that any use of nuclear weapons would have catastrophic consequences for Russian forces, and Jens Stoltenberg, secretary general of the North Atlantic Treaty Organization, repeated that message Sunday morning.

As the Biden administration scrambles to manage the most dangerous international confrontation since the 1962 Cuban Missile Crisis, it must see the world through Mr. Putin’s eyes. Only then can officials know how seriously to take the nuclear saber-rattling and develop an appropriate response.