Stalls and Sparks: Time to Do the Right Thing for Iran 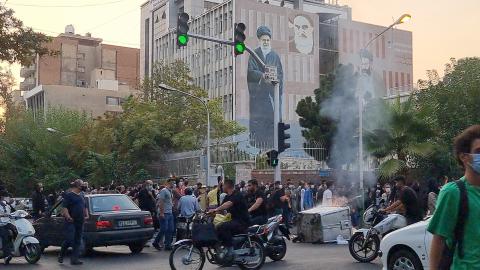 Caption
People gather in protest against the the Iranian regime on September 19, 2022, in Tehran, Iran, following the death of Mahsa Amini in custody of the country's morality police. (Getty Images)

After nearly a year and a half of indirect negotiations, nuclear talks between the United States and Iran are reportedly on hold until after the November midterm elections.

The proffered wisdom attributes this break to two Iranian demands. The first seeks guaranteed benefits for Iran in the likely event that a future American administration again withdraws from the nuclear deal, the Joint Comprehensive Plan of Action (JCPOA). The second would have the International Atomic Energy Agency (IAEA) close three open investigations into undeclared and unexplained nuclear materials the agency found in Iran. The regime has refused to cooperate with the investigation, which is unrelated to the JCPOA. Both the possession of undeclared materials and the refusal to cooperate with the IAEA are violations of the Islamic Republic’s obligations under the Nuclear Non-Proliferation Treaty (NPT).

In part because the JCPOA is an executive agreement and not a treaty, the Biden administration cannot provide guarantees that obligate its successors. Moreover, the U.S. cannot force the IAEA to close an active investigation, though the Obama administration led an effort among the agency’s board of governors that effectively did so as part of the JCPOA’s implementation in December 2015. Tehran’s IAEA demand is outrageous, and it would undermine the legitimacy of the agency and the NPT. But it is also born of Washington’s previous willingness to paper over Iran’s illicit nuclear activities.

The JCPOA proved to be a resounding non-proliferation failure, having guaranteed Iran the extensive nuclear infrastructure — unnecessary for a peaceful nuclear energy program — that the regime later used to violate the deal’s limited and temporary restrictions. The deal also sparked a Middle Eastern nuclear arms race, as Iran’s neighbors scramble to secure for themselves the same weapons-relevant capabilities the JCPOA grants the regime.

Nevertheless, the Biden administration remains fully committed to returning to the JCPOA, claiming that its non-proliferation benefits are in America’s national security interests. When asked to explain those benefits and the calculations behind them, administration spokespeople have refused to provide answers. Their silence is unsurprising, given that many of Iran’s violations are irreversible and that the JCPOA’s restrictions have already begun to expire.

So why pause until after the elections?

The White House knows now what the Obama administration understood when it tried to sell the nuclear deal in 2015: the JCPOA is enormously unpopular. Majorities in the public and Congress opposed it then and oppose returning to it now. Deal advocates have bent over backward to generate surveys that say the opposite, but to do so they ask about a theoretical deal that bears no real resemblance to the one that is on the table in Vienna. Insofar as foreign policy affects elections in the United States, the Iran deal is a guaranteed loser. The administration undoubtedly prefers to keep it on ice until after the elections.

In addition, the Biden administration is required by law to present any nuclear deal with Iran to Congress, which then has 30 days to review and possibly vote to approve or reject it. Majorities in both chambers are expected to oppose a return to the deal, though not by enough votes to overturn a presidential veto. Nevertheless, the White House can get an unfavorable nuclear agreement through a lame-duck Congress much more easily than it could through a pre-election House and Senate.

Postponing the talks might have inadvertently forced deal advocates to confront an obstacle they did not anticipate. The ongoing popular demonstrations on the streets of Iran—and the regime’s lethal attempts to suppress them — may have made it harder to reenter the nuclear deal. In 2020, the Biden-Harris campaign promised to “protect and empower women around the world.” Enriching and empowering the Iranian murderers of women who dared to speak up and who were judged to be dressed too immodestly would make a joke of this lofty and worthy goal. Yet the same spokespeople who refuse to explain the dubious arms control benefits of the JCPOA refuse to explain the American interest in providing hundreds of billions of dollars in sanctions relief to a regime that is now mowing down its citizens.

The White House undoubtedly sees the demonstrations as a regrettable hurdle on the path back to the JCPOA. Instead, President Biden should see them as an opportunity to rethink the administration’s approach to Iran, support the long-suffering Iranian population, pressure rather than placate the regime, and develop a solution that genuinely prevents Iran from developing nuclear weapons.

Brave Iranians, women above all, are risking their lives to demand change. Current US policy puts their lives at even greater risk, makes change less likely, and provides a tailwind to the regime’s brutal enforcers. The change the protestors seek is not just in the halls of power in Tehran, but in American policy as well. President Biden should heed their righteous call.