America’s Strategic Clarity in Defense of Taiwan: The Dangerous Illusion of Strategic Ambiguity 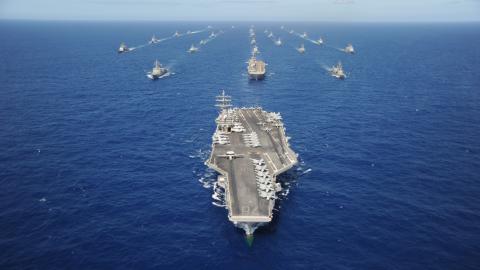 Caption
The Nimitz-class aircraft carrier USS Ronald Reagan leads a mass formation of ships from Korea, Taiwan, Japan, Singapore, France, Canada, Australia, and the US during Rim of the Pacific drills in the Pacific on July 24, 2010. (US Navy photo by Robert Taylor)

Conversations about US policy toward Taiwan often invoke “strategic ambiguity.” The promotion of this concept is quixotic, provocative, and dangerous. Strategic ambiguity has never been the official US position. What has kept the Taiwan Strait peaceful and stable for the past seven decades is not strategic ambiguity, but the exact opposite. When it comes to the use of force in defense of Taiwan, America’s position is consistent and unambiguous: strategic clarity.

The concept of strategic ambiguity refers to the supposed US position of not stating whether it will use force to defend Taiwan, if and when China invades the democratic nation. The policy’s purported purpose is to discourage such aggression, as well as any pretext for such aggression, namely the unilateral declaration of independence by Taiwan.

Dating back to the mid-1990s, the almost mystical thinking about “strategic ambiguity” has spread like a contagion, affecting the minds of policymakers. Proponents regard it as a balm to soothe China, and a way for Washington to engage the PRC without engendering Beijing’s wrath, which would spoil “the most important bilateral relationship in the world.” But too often, strategic ambiguity becomes a convenient excuse for indolence in America’s China policy.

The concept of strategic ambiguity is intellectually incoherent. It confuses strategic intent with tactical operations. In its strategic intent, the United States has always maintained a policy and practice of strategic clarity. Implicitly or explicitly, every US president, since Harry Truman, has upheld America’s intent to intervene in the event of a PRC invasion of Taiwan. As is the case with all military plans, the only ambiguities are tactical and operational — questions of how, not if.

Strategic ambiguity is also quixotic because Beijing has never believed that the US is ambiguous about its intent to intervene militarily in the event of a PLA invasion of Taiwan. This belief alone should make it obvious that talk about strategic ambiguity in Washington or elsewhere is delusional.

It is difficult to find any influential person in the government of the People’s Republic of China who believes in America’s strategic ambiguity. All CCP leaders, from Mao Zedong (毛澤東) to Xi Jinping (習近平), firmly believe the US will intervene with force in the event of a PLA invasion of Taiwan, subscribing to the unwavering belief in what the CCP calls the John Foster Dulles Doctrine on Taiwan — that the US grand strategy for global hegemony demands and requires Taiwan to be an “unsinkable aircraft carrier” for the US and that the US would never let a communist country like China take over Taiwan and will unequivocally use force to intervene if the PLA attempts to invade the island.

Guided by its own belief in America’s strategic clarity, the CCP has embarked on a massive military buildup targeting the US military as its preponderant threat in any Taiwan invasion scenario. The PLA’s theory of victory, which informs its operations and tactics, envisions defeating the US military as a prerequisite for taking Taiwan. On this point, the CCP is unambiguous.

Strategic ambiguity is not codified US strategic doctrine, though it has frequently been invoked by Beltway policymakers and pundits as if it were. Yet it has been repeated enough in democratic capitals that some leaders believe that it may actually be true that the United States is indecisive, undecided, and above all, ambiguous, when it comes to Taiwan’s defense against a PLA invasion.

However, repetition does not make falsehoods true. America’s longstanding strategic clarity with regard to Taiwan’s defense goes back seven decades.

It began on June 25, 1950, the day the communist, PRC-backed North Korean People’s Army launched the Korean War. On that same day, President Truman dispatched the US 7th Fleet into the Taiwan Strait to protect the island nation from a possible PRC invasion, and to neutralize the area. This strategic clarity was codified in 1955 with the Sino-American Mutual Defense Treaty between the United States of America and the Republic of China (Taiwan), which lasted for 30 years.

Then, on January 1, 1980, President Jimmy Carter unilaterally terminated the Mutual Defense Treaty. However, even with this change, the United Stated did not abandon its strategic intent to defend Taiwan. This was not the birth of an official US policy of strategic ambiguity.

Since 1980, what’s followed has been a period of gradual evolution from the Carter-Reagan era of what might be called “strategic translucency,” wherein the old clarity found new forms.

Strategic clarity has lasted through every PRC-instigated crisis and provocation against Taiwan. Most famously, during the Third Taiwan Strait Crisis in 1995 and 1996, President Bill Clinton dispatched two US aircraft carrier battlegroups to the waters near the Taiwan Strait, where the PLA had fired missiles to intimidate Taiwanese voters.

Presidents have reiterated strategic clarity through statements and other actions. In 2001, President George W. Bush explicitly stated that he would “do whatever it takes to defend Taiwan.” Later, during the Trump Administration, the United States developed an extraordinarily robust US-Taiwan relationship that was entirely outside the framework of the US-China relationship. This closer relationship included dramatic increases in arms sales of critical weapons to Taiwan, as well as numerous high-level, official visits to the democratic island nation.

Today, we are living at a time of enhanced US strategic clarity. It has grown in the last six years, through Republican and Democratic administrations.

We see it in US warships that have repeatedly defied the PRC’s so-called “red line” by conducting freedom of navigation operations through the Taiwan Strait. The frequency of these operations has dramatically increased by more than ten times, essentially internationalizing the crucial waterway for Taiwan’s defense.

The US Congress has also achieved a historic, bipartisan consensus on the importance of defending Taiwan. We’ve seen this in several landmark acts passed with unanimous, or near-unanimous, support, further codifying America’s strategic clarity in defense of Taiwan.

America’s military leaders have reiterated the US position of strategic clarity. Admiral Samuel J. Paparo is the commander of US Pacific Fleet, with the responsibility to carry out America’s military operations in the event of a Chinese attack on Taiwan. On Oct. 19, 2022, Admiral Paparo stated that the US will “be prepared to thwart any invasion of Taiwan, any effort to resolve the matter by force, and on that, there is no ambiguity.”

The White House has been equally clear. Since October 2021, on four separate occasions, President Joe Biden has explicitly and unambiguously stated that the US would intervene militarily if the People’s Republic of China invaded Taiwan.

Still, there are those in Washington who refuse to give up their belief in strategic ambiguity. They invoke White House clarifications on the President’s statements, calling them “pushback” or “backtracking.” However, White House reiterations of the US’s unchanged “One China policy” are not inconsistent with the American Presidents’ strategic clarity on the defense of Taiwan.

On the contrary, they affirm that position. Reiterating America’s One China Policy bolsters the US’s position of strategic clarity, as an essential component of the One China Policy is the US’s longstanding position against the use of force to settle the Taiwan issue, by either side of the Taiwan Strait. There is nothing ambiguous about this position, as multiple administrations have stated.

Strategic clarity on Taiwan should help provide strategic clarity on the China challenge as a whole. The CCP is a revisionist regime poised to launch a chain of aggression in the Indo-Pacific, with Taiwan as the first link in that chain. We have seen such aggression before, in Sudetenland with Nazi Germany, and in Manchuria with Imperial Japan.

Taiwan is China’s Sudetenland. The CCP is not ambiguous about this. And neither should we be. Let’s avoid the dangerous and tragic “strategic ambiguity” as seen in Munich in 1938.

Read in the Taipei Times.