As Putin Tries to Carve Up Ukraine, Biden Must Go for Broke—and Deliver Kyiv Better Weapons 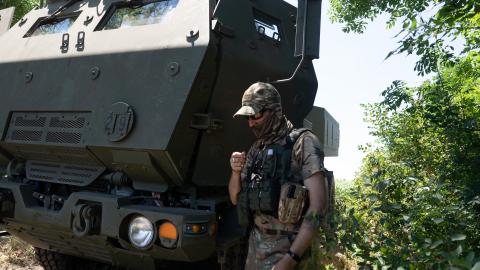 On Friday, Russian President Vladimir Putin is set to deliver a widely anticipated speech celebrating the annexation of Ukrainian territory into the Russian Federation. Its contents have been staring us in the face since before the beginning of the war. Putin is going for broke in Ukraine, and the Biden administration should adjust its strategy accordingly.

On Monday, Feb. 21, 2022, the head of Russia’s foreign intelligence service, Sergey Naryshkin, stood and addressed Putin at a meeting of the Russian Security Council. Unsure of himself and veering off topic, Naryshkin committed a revealing blunder when he said, “I support the proposal to include Donetsk and Luhansk People’s Republics in the Russian Federation.”

His words earned an immediate rebuke from Putin, who interrupted, “We’re not talking about that; it’s not what we’re discussing.” Russian forces attacked three days later.

Seven months and tens of thousands of casualties later, Putin is now executing his plan. In Donetsk and Luhansk, as well as in Zaporizhzhia and Kherson, Russia carried out sham referendums this week on joining Russia. In true North-Korean style, for example, over 99% of voters in Donetsk voted to join Russia.

As US Secretary of State Antony Blinken put it, “Russia has forced much of the population in areas it seized to flee and compelled Ukraine’s citizens that remained to cast ballots at gunpoint, in fear for their safety, and the safety of their loved ones.”

Why Putin would want to control these areas is self-evident. Together, the regions of Donetsk, Luhansk, Zaporizhzhia, and Kherson constitute a land bridge that connects the Russian mainland to the Crimean Peninsula. By annexing them, however, Putin has crossed the Rubicon — a development for which the Biden administration’s strategy for war termination is ill suited.

For months, US President Joe Biden has pursued the dual-pronged objective of keeping Ukraine in the fight while disincentivizing Russia from escalating. Instead of rushing weapons to Ukraine in the pursuit of victory, he has sought to calibrate military aid in the apparent hope of achieving an equilibrium that leads to a negotiated outcome. Just as Ukrainian battlefield reversals have accelerated US weapon deliveries to Ukraine, so too have Putin’s threats, nuclear and otherwise, limited the types of systems Washington has been willing to provide Kyiv.

Putin’s annexation of vast parts of Ukraine puts an end to any hopes for a negotiated settlement, however. He can no less return newly incorporated Russian territory to Ukraine than Ukrainian President Volodymyr Zelensky can agree to surrender vast chunks of his country to Russia. For both Putin and Zelensky, the political stakes are existential. In such a setting, the prospects for peace are virtually zero.

This puts the Biden administration in a difficult position. To date, the US and Europe have moved in lockstep on the war in an impressive display of resolve and unity. But as the economic pain of sanctions and countersanctions grips Europe in particular, calls for accommodation masquerading as peace will only grow. For the second time this month, tens of thousands of Czechs took to the streets this week to protest the country’s high energy prices. Over time, Western support for Ukraine may fray.

There is a better way. Instead of condemning Ukraine to years of warfare and counting on European solidarity in perpetuity, the US should set as its goal Ukrainian victory. In each of the four regions Putin has annexed, fighting continues to rage, undercutting his claims of annexation. In Kherson, for example, Ukrainian troops have pinned Russian forces into a kill zone west of the Dnipro River; meanwhile, Ukraine’s spectacular counteroffensive in Kharkiv threatens Russian supply lines in the Donbas. If given the tools to liberate its territory, Ukraine has shown an ability to inflict major defeats on Russia.

Already, Putin’s ability to project power in other theaters is diminished. By helping Ukraine achieve victory, the US can ensure that Putin’s gambit puts an end to Russia’s dreams of empire. That would transform Putin decision to annex Ukrainian territory into a blunder of truly historic proportions.