The South Caucasus and the Gulf: Overlapping Interests and the Benefits of Enhanced Cooperation 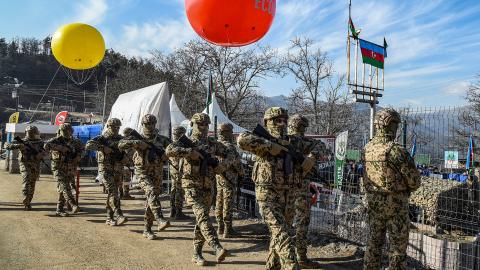 Caption
Azerbaijani servicemen stand guard at a checkpoint at the Lachin corridor, the Armenian-populated breakaway Nagorno-Karabakh region's only land link with Armenia, on December 27, 2022. (Tofik Babayev/AFP via Getty Images)

The South Caucasus is at the heart of the Eurasian landmass, sandwiched between two major energy markets: Europe and Asia. It is a region that does not get much attention from policymakers in member states of the Gulf Cooperation Council.

The three countries of the South Caucasus—Armenia, Azerbaijan and Georgia—combined have an economy worth $110 billion, and a population of approximately 17 million. But what this region might lack in terms of economic might and population, it makes up for in geostrategic location.

If the correct policies were to be pursued, the South Caucasus and the Gulf region could expand their diplomatic, economic and trade cooperation. As the world becomes increasingly multipolar, smaller but more strategic relationships will attract more attention from global powers.

It is therefore in the interests of countries in these regions to seek areas for cooperation, especially where their interests overlap. Policymakers from GCC countries should consider the potential benefits of enhancing relations with the countries of the South Caucasus.