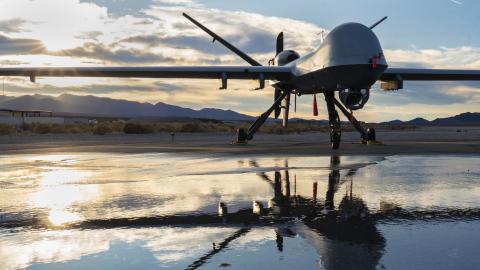 Caption
An MQ-9 Reaper is parked on a taxiway during sunset at Creech Air Force Base in Nevada, on November 17, 2020. (US Air Force photo by Haley Stevens)

The Biden administration’s decision to send Bradley Fighting Vehicles to Ukraine is being heralded as a sign that the United States and its Western allies will back Kyiv’s efforts to retake Russian-occupied territory. But a hundred or so armored troop carriers will not be enough to drive Russian troops back across the border. Instead, allies should give Kyiv weapons that exploit the transformation of Ukraine’s military into a force that gathers, distributes and acts on information faster and more lethally than its enemy — or almost any other military.

Combining commercial satellite imagery with drone reconnaissance and Western intelligence, Ukrainian commanders maintain a comprehensive picture of the battlefield. Connected by Starlink to artillery batteries, missile launchers and attack drones, they use software to review their attack options. And when the timing is right, soldiers take out the most important Russian targets, from generals in command posts to ammo dumps brimming with ordnance.

What gets the most attention from Ukraine’s military innovation is the losses imposed on Russian forces, which have forced Moscow to call up hundreds of thousands of conscripts and beg North Korea and Iran for weapons. But simply closing kill chains more efficiently is only part of the story — and not the most important part.

Outnumbered and outgunned throughout the invasion, the Ukrainian military’s reliance on decision-making advantage is a preview of how wars will be fought going forward. Proliferation has put precision weapons in the hands of nearly every military and insurgent group. The next era of military conflict, therefore, will depend on which side can use their weapons more effectively and paralyze the enemy.

Russian forces are experiencing this dynamic. Facing Ukrainian commanders who can tap into an unprecedented range of information sources, a wide variety of lethal drones and missiles, and command and control software that builds strike plans like Google Maps builds a route, Russian troops are falling back into a defensive crouch while Moscow attacks Ukraine’s power grid at long range to force a temporary stalemate.

Ukraine’s success is not from superior Western weapons. The United States and its NATO allies have held back their most capable systems, such as long-range ATACMS missiles, fighter aircraft, and long-endurance drones. All the weapons and drones supplied to Ukraine thus far are, at least in theory, comparable to Russian arms.

The difference is how Ukraine uses its steady supply of Western equipment. With software tools the Ukrainian soldiers build themselves, even centuries-old artillery technology can be more lethal and effective. And by empowering field commanders, Ukraine’s leaders let them employ their own creativity to an extent even the US military has not done since World War II.

The most prominent Ukrainian victories resulted more from decision-making successes than high-tech weapons. Russia’s Black Sea flagship Moskva was sunk by Ukrainian-built missiles directed by commercial satellite imagery and supported by off-the-shelf drones that confused the ship’s defenses. And Ukraine’s retaking of the southern capital of Kherson last fall was made possible by a feint in the north and a series of strikes against bridges that isolated Russian troops from supplies and reinforcements.

With drones, rockets, guided artillery and electronic warfare at their disposal and handheld devices able to sort through possible plans, Ukrainian commanders have the edge in when, where and how to pursue their objectives over Russian counterparts relying on predictable doctrine and tactics. In their attempts to prepare for the variety of Ukrainian options, Russian commanders end up losing the initiative.

Ukraine’s defense is only the latest example of decision-making being more important than attrition in 21st-century conflict. China’s island-building in the South China Sea and Russia’s “little green men” in Ukraine before the invasion created options for them and left US allies flat-footed without firing a shot. The United States withdrew from Iraq and Afghanistan not because of losses but because of a lack of good options. And in simmering conflicts from Nagorno-Karabakh to the India-China border, the side with fewer options finds itself in a dilemma and is forced to seek a resolution.

Fighting in Ukraine continues to retain elements of 20th-century combat, from artillery duels to trench warfare. But these features likely would fall away if the US and its allies equipped Ukraine to fully embrace the transformation underway. Patriot batteries and Bradleys are a start but need to be complemented with offensive capabilities that expand Ukrainian commanders’ options and continue shrinking Russia’s decision space.

Longer-range missiles including ATACMS, drones such as the MQ-9 Reaper, and F-16 fighter aircraft would not just help Ukraine fight like NATO would but also could help Kyiv’s defenders pioneer the next era in military operations. While the creaking Pentagon bureaucracy trundles toward all-domain command and control and a new warfighting concept, Ukrainian troops are putting them into action. The US government should enable Ukraine’s innovation and then learn from it.