Now Is Not the Time for Naivety on Iran 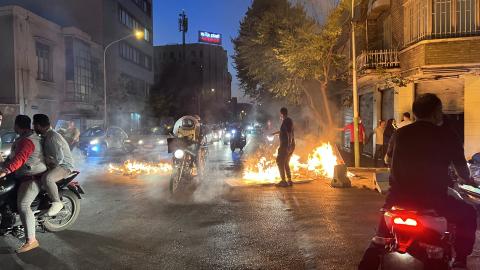 In recent weeks Iran has stepped up its pressure at home, in the region, and beyond.

For the past three weeks the regime in Tehran has faced major upheaval at home in response to the death of Mahsa Amini. The protests started outside the hospital in Tehran where Amini died, and spread rapidly to her home province of Kurdistan and to every major city in the country. This has led to a brutal crackdown that has resulted in more than 150 people killed and hundreds more injured.

Meanwhile, in recent weeks there were Iranian drone and missile strikes in northern Iraq, and Russian-operated Iranian drones over the skies of Ukraine are growing in number.

Even after the appearance of Iranian drones in Ukraine, and Tehran’s brutal crackdown against its own people, the Biden administration continues to hope for a new nuclear deal in Vienna. It is time for the international community, led by the US, to acknowledge that Iran is not going to be a responsible player on the global stage. Policies for this new reality must be developed accordingly. Here are five things that the US and its partners in Europe and the Middle East can do to deter Iranian aggression.

The first thing would be to walk away from the Vienna talks. The Biden administration has been desperate to secure a new deal with Iran, but little progress has been made. President Ebrahim Raisi has shown no real desire to agree to a new deal. He has not once demonstrated that he can be a trusted partner in the talks. Also, Russia is Iran’s main interlocutor in Vienna for the talks. This is problematic because of the breakdown in relations with the Russians over Ukraine. It’s time to pull for Biden to pull the plug on the talks.

After walking away from the Vienna talks the second thing the Biden administration needs to do is return to the Trump-era “maximum pressure” campaign against Iran. The Biden administration has rolled back certain sanctions that were implemented during his predecessor’s time in the hopes of building goodwill for the nuclear talks. For example, in August 2021 Biden lifted sanctions on two Iranian missile producers. Extraordinarily, this came at a time when Iran targeted commercial and civilian infrastructure in Saudi Arabia and the UAE with ballistic missiles, through their Houthi proxies in Yemen. No amount of generosity from the White House on the issue of sanctions has changed Iran’s behavior or made it more open to genuine talks in Vienna.

Third, the White House needs to inject new enthusiasm to deepen and widen the Abraham Accords. The normalization in relations between Israel and some of its Arab neighbors was perhaps the greatest foreign policy achievement of the Trump administration. Even though the Biden administration was initially reluctantto acknowledge the importance of the accords, it has recently been changing its tune on their success. The administration should redouble its efforts to obtain a second round of Abraham Accords agreements and help bring the region closer together. Closer relations mean a stronger region in the face of Iranian aggression.

Fourth, the Biden administration should dust off and revive old proposals such the Middle East Strategic Alliance concept. This idea was first proposed by the Trump administration as a way to deepen US engagement in the region while increasing burden sharing. For a number of reasons, it never got off the ground. But considering Iran’s prolific use of ballistic missiles and armed drones across the region, perhaps air defense cooperation would be a good way to jump start the project again. Even if the Biden administration wants to rename it, and put its own stamp on the initiative, the idea of US-Arab military cooperation is one worth pursuing.

Finally, Biden must not be scared to use force in a proportionate but lethal manner when American troops are targeted by Iran or its proxies. Over the past year and a half, Iranian forces, or their proxies, have used missiles and drones to strike at US forces in Syria, Iraq, and even the UAE. Strikes against American troops and their bases cannot go unanswered. The goal isn’t to spark a major war in the region, but to bring more stability by reestablishing a level of deterrence that the Iranians will recognize and respect.

Regrettably, there is no precedent in modern American political history for an incumbent president to abruptly change their ways and adopt a predecessor’s policies — especially on major foreign policy issues. However, with midterm elections looming in the US, and with the Republicans posed to make gains in the Congress, it may be that Biden has no choice but to take a tougher line on Iran. The sooner this happens, the better. Now is not the time for naivety, but for realism.