‘An Unladylike Profession’ Review: New Recruits, Over There 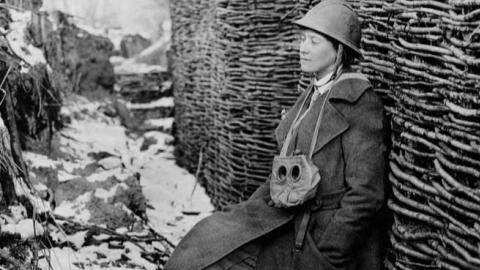 Caption
Photojournalist Helen Johns Kirtland in a trench during World War I.

When bestselling mystery novelist Mary Roberts Rinehart, in 1914, asked the editor of the Saturday Evening Post to send her to Europe to cover the war that had just broken out there, he at first refused. “Frankly,” he replied by telegram, “I do not care to take the responsibility of sending anyone over there except old maids, widows and our really tough boys.”

Rinehart, a middle-aged wife and mother, knew nothing about the military, and she had never worked as a journalist, much less covered a war. Yet she managed to persuade the reluctant editor that she was up to the job, becoming the first journalist—female or male—to report from the frontline trenches. Her coverage for the two million readers of the Saturday Evening Post helped shape the American public’s understanding of the Great War.

Rinehart is just one of the nearly three dozen female war correspondents whose personalities and accomplishments Chris Dubbs brings vividly to life in “An Unladylike Profession.” This slice of World War I history offers insights into American journalism as well as into the terrible conflict itself. Mr. Dubbs is an independent military historian, and this is his third volume on World War I. He writes with a sure hand, drawing from published articles, memoirs, diaries and letters. He skillfully presents each woman’s story in a linked series of riveting—sometimes heart-breaking—narratives.

Most of the bylines won’t be familiar to contemporary readers. An exception is the novelist Edith Wharton, who covered the war in France, her adopted homeland, for Scribner’s Magazine. Another is Nellie Bly, who earned her journalistic chops in the late 19th century by posing as a patient in a lunatic asylum. Bly was one of the first journalists to cover the war on the Eastern Front, in articles for the New York Evening Journal.

As Mr. Dubbs takes pains to emphasize, female correspondents did everything their male counterparts did: They reported from the frontlines, came under fire, were wounded or taken prisoner, and risked arrest by smuggling forbidden writing out of warring countries. More than their male counterparts, however, Mr. Dubbs writes, the work of “women war correspondents defined the Great War in terms of its impact on individual lives.” This approach proved to be one of the most important stories of the war, and it transformed the nature of war reporting.

Women found human-interest stories in every corner of the conflict. Mary Boyle O’Reilly of the Newspaper Enterprise Association joined a column of refugees fleeing German atrocities in Belgium and wrote about the war’s crushing impact on women and children. Marie Gallison, a German-born American, traveled to her native land in 1916, before the U.S. entered the war. Her articles for the Outlook were among the few in the American press that were sympathetic to Germans. On a reporting trip to Constantinople, Eleanor Egan of the Saturday Evening Post uncovered evidence of one of the biggest stories of the 20th century: Turkey’s systematic killing and deportation of its Armenian population. In Armenia, she found “a land of hideous human suffering and degradation.”

Female reporters sometimes resorted to indirect means to gain access to the front. When Mary Roberts Rinehart arrived in Europe, the British and the French, eager to control the flow of information, refused to allow journalists anywhere near combat. Rinehart, who had trained as a nurse, got her scoop by asking the Belgian Red Cross to give her a tour of the war zone. The Belgians were happy to comply, believing that her sympathetic reporting would result in much-needed contributions from Americans. Other women overcame bureaucratic hurdles or discrimination from male officials by volunteering with the Red Cross, the Salvation Army, the YMCA or other organizations that worked near the fighting.

As the war progressed, American editors began to recognize that the “women’s angle” constituted news. The Evening Public Ledger, in Philadelphia, dispatched the editor of its women’s pages to Europe. Good Housekeeping and Ladies’ Home Journal sent correspondents. When the U.S. entered the war in 1917, Rheta Childe Dorr, a journalist whose son was posted at the front, chose to write from a mother’s point of view. She penned 30 articles for the New York Evening Mail under the title “A Soldier’s Mother in France.”

One of the pleasures of “An Unladylike Profession” is sampling the journalistic prose of more than a century ago. Alice Rohe of United Press called Vienna “a city of lost hope, of gloom, of grave despair.” Writing in the spring of 1917 about the revolutionary upheaval in Russia, Rheta Childe Dorr told readers of the New York Evening Mail that Russia was “gorged on something she has never known before—freedom.” For Corra Harris, writing in the Saturday Evening Post, war was “a ferocious form of insanity.”

Wharton’s literary skill is on display in her poignant description of wounded French soldiers limping through her beloved Paris. They are “calm, meditative, strangely purified and matured,” she wrote. “It is as though their great experience had purged them of pettiness, meanness and frivolity, burning them down to the bare bones of character.”

One of the few women with prior experience as a war correspondent was Peggy Hull of the El Paso Morning Times. In 1916 she had covered the U.S. incursion into Mexico, where she had earned the respect of Gen. John J. Pershing, who went on to become commander of the American Expeditionary Forces on the Western Front. With Pershing’s imprimatur, Hull became the first female correspondent to be credentialed by the U.S. Army. She wrote the words that could serve as an epigraph for every reporter of the Great War: “New horrors pounce upon me from every direction.”

Near the end of “An Unladylike Profession,” Mr. Dubbs remarks on the reporter’s duty to report the truth no matter how uncomfortable it might be. The journalists profiled in this absorbing book lived up to that responsibility. Would that the same could be said of more journalists today.