The United States is the most successful immigration country in the history of the world for one basic reason⎯the triumph of patriotic assimilation⎯the assimilation of immigrants as loyal members of the American body politic.

For more than 200 hundred years immigrants to America and their children have successfully assimilated into what has been called the “American way of life.” The patriotic assimilation of immigrants into the American constitutional regime did not just happen “naturally.” Patriotic assimilation was the end result of a sometimes explicit (and other times implicit) long-range vision that was formulated by America’s leaders. Since the days of George Washington continuing through the era of Theodore Roosevelt and Woodrow Wilson, and supported in the past decade by such public figures as Barbara Jordan⎯this strategic vision has helped to define immigration-assimilation policy by welcoming immigrants and assimilating them into the mainstream of American civic life.

A crucial and absolutely necessary part of patriotic assimilation for more than 200 years had been the bond of the English language, historically promoted by our schools, civil society organizations, state and local governments, and the federal government. If our democracy is going to work, Americans must be able to communicate with each other. A common language is essential.

There is no doubt that mastery of English is essential for active citizenship in American constitutional democracy. During the next year and a half Americans will be involved in a presidential campaign that will be conducted 99% or so in the English language. An American not proficient in English would be at a tremendous disadvantage. He or she would have to depend on bits of translated material and information-opinion-propaganda from the foreign language media. They would not have the full range knowledge needed to make intelligent choices.

Unfortunately for our democracy they would be more of a client than a citizen. If American liberal democracy is to thrive and prosper all our people should be fluent in English. That is to say, they should be independent citizens capable of making their own political choices, not dependent clients (and, thus, in an objective sense, really “second class” citizens) beholding to special interest groups because they do not have access to the full range of information available to proficient English speakers.

De-emphasizing and placing obstacles in the path of English acquisition (by, for example, ridiculing the promotion of official English) may serve the goals of special interest groups seeking clients to manipulate, but does not serve the interests of the American people as a whole. Nothing could be more welcoming to immigrants than establishing official English. This says to the newcomers “We want you to be full citizens in our democracy,” not the dependent clients of some special interest group.

Opponents of official English tell us that while non-English speaking immigrants recognize the importance of knowing English in American society, the newcomers would be “offended”─or think it would be somehow “hostile” to them─if English were to become the official language of the United States.

This position is empirically false. Both immigrant citizens and native-born citizens strongly support official English. In a Harris (part of the Nielson company) survey taken in December 2014 for the Hudson Institute the question was asked: “Do you believe English should be made the official language of the United States? There were five possible choices: definitely should be; probably should be; probably should not be; definitely should not be; not sure.

In other words, combining the categories, 83% of immigrant citizens and 87% of native-born citizens believe that English should be the official language of the United States. Only 10% of native born and 15% of naturalized citizens opposed official English.1

Let us take a look at patriotic assimilation in American history.

This idea of promoting assimilation has been with us since the Founding. On November 15, 1794, President George Washington wrote Vice-President John Adams worrying that if immigrants are bunched together and settled in a “body….They retain the language, habits and principles (good and bad) which they bring with them. Whereas by an intermixture with our people, they, or their descendants, get assimilated to our customs, measures, laws: in a word soon become one people.”2

Political rivals Thomas Jefferson, and Alexander Hamilton held similar views on the need for assimilation, as did James Madison the father of the Constitution. In Federalist Paper No 2, John Jay declared that “Providence has been pleased to give this one connected country a people…speaking the same language.”3

A little more than 100 years after America’s Founding, during the period of mass immigration, former President Theodore Roosevelt in a letter of January 3, 1919 famously declared:

“We should insist that if the immigrant who comes here does in good faith become an American and assimilates himself to us he shall be treated on an exact equality with everyone else, for it is an outrage to discriminate against any such man because of creed or birth-place or origin…But this is predicated upon the man’s becoming in very fact an American and nothing but an American….There can be no divided allegiance here. . . We have room for but one language here, and that is the English language, for we intend to see that the crucible turns our people out as Americans, of American nationality, and not as dwellers in a polyglot boarding-house; and we have room for but one soul loyalty, and that is loyalty to the American people.”4

One hundred years ago, the percentage of foreign-born in the United States was the same as it is today, 13%.5 A major political issue in 1915 was how to assimilate what was then a record number of non-English speakers. Unlike today the answer was given forcefully and clearly by America’s leaders who happened to be Progressive Democrats. At an Americanization day speech to newly naturalized citizens in Philadelphia July 4, 1915 President Woodrow Wilson declared:

“You cannot dedicate yourself to America unless you become in every respect and with every purpose of your will thorough Americans. You cannot become thorough Americans if you think of yourselves in groups. America does not consist of [national] groups. A man who thinks of himself as belonging to a particular national group in America, has not yet become an American, and the man who goes among you to trade upon your nationality is no worthy son to live under the Stars and Stripes.”6

The next day July 5, 1915 at another Americanization Day speech, Louis Brandeis, the most prominent Jewish American immigrant of the period, leading progressive, and future Supreme Court Justice told a gathering of immigrants:

“What is Americanization? It manifests itself, in a superficial way, when the immigrant adopts the clothes, the manners and the customs generally prevailing here. Far more important is the manifestation presented when he substitutes for his mother tongue the English language as the common medium of speech. But the adoption of our language, manners and customs is only a small part of the process. To become Americanized the change wrought must be fundamental. However great his outward conformity, the immigrant is not Americanized unless his interests and affections have become deeply rooted here. And we properly demand of the immigrant even more than this. He must be brought into complete harmony with our ideals and aspirations and cooperate with us for their attainment. Only when this has been done will he possess the national consciousness of an American.”7

In the 1990s Congresswoman Barbara Jordan (D-TX) the first African American woman elected from Texas led an immigration commission that made strong recommendations for a new Americanization program and for the mastery of English by newcomers.

This is the type of robust and vigorous patriotic language that American leaders need to recapture. For today (according to the latest U.S. Census) we have 42 million immigrants out of a population of around 319 million. Our task in 2015, (as in 1915) is to patriotically assimilate the newcomers into the mainstream of American life. This is what the overwhelming majority of both naturalized and native-born citizens want. The establishment of official English by the Commonwealth of Pennsylvania is an important step in the right direction.

The official English bill that has been proposed is relatively modest. It only applies to government business and leaves plenty of exceptions in the interest of “public health, safety or justice.” It would save Pennsylvania tax payers money. And yet, opposition to official English borders on hysteria and irrationality. One legislator described the 2011 official English bill as “pointless,” “divisive,” “self-defeating,” and “inconsistent with American values.”8 The ACLU’s official website still describes the legislative initiative of 2011 as “the theater of the absurd.”9 It further states that if enacted this legislation would be “unwelcoming to immigrants and ethnic minorities.”10 It is sad to see this once effective organization reduced to childishly objecting to legislation that seeks to unite Americans in the spirit of George Washington’s letter to John Adams (“in a word, soon become one people”). Unfortunately, opponents continue to hurl accusations of “hostility” and “discrimination” against the proponents pro-English legislation.

Why the irrational response and overblown rhetoric to what is, in fact, a very modest effort to promote English and welcome newcomers to our land as independent citizens? Could it be that the activist and militant groups opposing official English have a vested interest in dividing Americans into warring linguistic blocs? Could it be that these groups profit both financially (in terms of fund-raising) and also in the realm of political power by keeping newcomers in the role of dependent clients rather than independent citizens? Could it be in the ungenerous and narrow self-interest of the opponents to limit English promotion among non-English speakers? One thing is for sure it certainly is not in the interest of the immigrants themselves?

The proposed official English legislation of 2015 is in keeping with the tradition of the patriotic assimilation of newcomers dating back to George Washington and America’s Founding, continued by Progressive leaders Theodore Roosevelt, Woodrow Wilson, and Louis Brandeis during the heyday of Ellis Island, and promoted by the Barbara Jordan Commission in the 1990s. What is “divisive” is not the continuation of this great American tradition, but the attempt by special interest groups and lobbies to foster competing linguistic blocs that undermine our common citizenship, that undermine the Unum in E Pluribus Unum.

Official English is not only consistent with historical and contemporary American values (after all, it is on the books in 31 other states), it is (as noted earlier) overwhelmingly favored by the immigrants themselves. Making English our official language should be what is colloquially called a “no-brainer.” The proponents of this legislation in the Commonwealth of Pennsylvania should be commended for welcoming newcomers as full and equal citizens of our representative democracy.

Figure 1 Making English the Official Language of the U.S.* 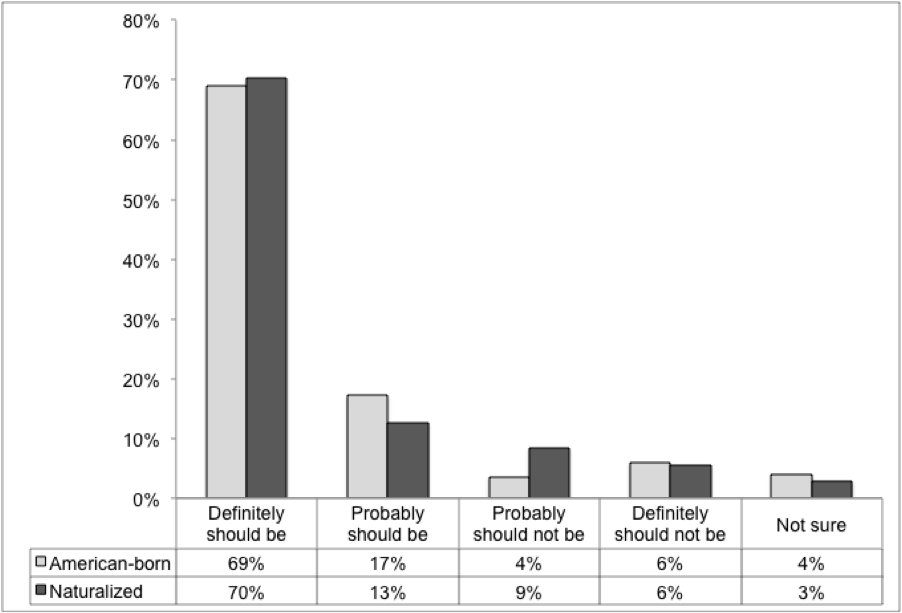 A large majority within each group strongly agreed that English should be the official language of the U.S. (69 percent of the American-born and 70 percent of the naturalized)