Sessions the Tribune of the American Worker 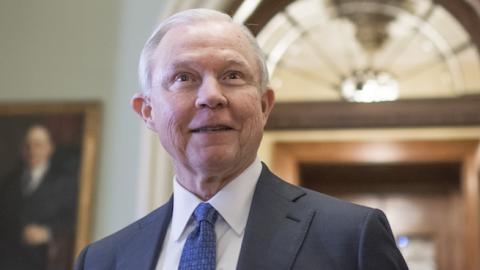 In the final centuries of the Roman Republic, two political forces struggled for power: the optimates (patricians or elites) and populares (plebeians or the majority of the citizens.) In ancient Rome and modern America, for the most part, elites (particularly corporate and financial) have traditionally been thought of as “special interests” associated with the political Right, as opposed to the bulk of the common people on the political Left. From the days of the “Gilded Age” in the late 19th century until very recently, the Republican Party has been labeled as the party of Big Business, corporations, the Chamber of Commerce, “special interests,” the rich, and so on. Mitt Romney’s presidential campaign in 2012 seemed to epitomize this familiar narrative.

The conventional wisdom was vigorously challenged during the congressional debate over “comprehensive immigration reform” in the spring and summer of 2013 by Sen. Jeff Sessions (R-Ala.), President Donald Trump’s nominee for attorney general.

On July 29, 2013, Sen. Sessions sent a memo to all Republican members of Congress stating that the “GOP needs to flip the immigration debate on its head” and adopt “a humble and honest populism.” Sessions stated that the Congressional Budget Office (CBO) “confirms that the proposal [the 2013 “Gang of Eight” immigration bill] will reduce wages and increase unemployment. Low-income Americans will be hardest hit.” He noted that “immediate amnesty and a drastic surge in low-skill immigration” would hurt “working Americans of all backgrounds.” Sessions urged Republicans to say “no” to “certain business demands and powerful interests who shaped the immigration bill in the Senate. ”

Instead, immigration policy, Sessions insisted, with its “lasting social, economic, and moral implications” should serve the interests of the American people as a whole, not the “financial interest of a few CEOs.” Republicans should “make an unapologetic defense of working Americans” which would be both the right thing to do (“prevent the implementation of a disastrous policy”), and be politically effective (“begin a larger effort to broaden our appeal to working Americans of all backgrounds.”)

Sessions urged his allies in the House — Tom Cotton (R-Ark.), Mo Brooks (R-Ala.), Steve King (R-Iowa), and others — to block the Senate immigration bill, which they did. In the years since, Sessions has relentlessly argued that Republicans should stand up for the working class and middle class of all ethnicities and backgrounds (native-born and immigrant citizens alike) and not favor special interests over national interests.

First and foremost, on the issue of immigration in particular, Sessions has articulated a moral vision of patriotism and economic opportunity. Most significantly, he declared, "We are a nation, not [just] an economy…we have a responsibility, a moral duty, to our citizens to make their lives better." When President Obama urged Silicon Valley CEOs to increase their efforts to promote mass low-skilled immigration, Sessions retorted "America is not an oligarchy…A republic must answer to the people."

On the contentious issue of immigration, Sessions has done what no Republican before him has ever done: He has (as promised) "flipped" the moral and political calculus of the debate. Today, a large group of Republicans are championing the interests of the workers, middle class, and the nation as a whole, and almost all Democrats are favoring the mass importation of wage-reducing, low-skilled labor and thus are in league with elites that have benefited from cheap labor for the past 20 years, as average American wages have stagnated. Moreover, between the immigration debate of 2013 and the presidential campaign of 2016, Jeff Sessions' moral clarity paved the way for Donald Trump's successful appeal to the forgotten American worker.

The Senate Democratic leader of the elite, pro-mass, low-skilled immigration forces on Capitol Hill is Sen. Charles Schumer (D-N.Y.). Schumer explicitly mentioned immigration as a prime reason he opposes the Sessions nomination as attorney general, noting that "I am also deeply concerned by his views on immigration, which I saw firsthand during the push for comprehensive immigration reform." No doubt Schumer is "concerned" with Sessions' "views" on immigration policy. But at a deeper level, Schumer (one of the more perceptive Democratic leaders) realizes that Sessions' (and Trump's) moral narrative, which has Republicans replacing Democrats as champions of the working class, strikes at the core of the Left's political coalition.

Most significantly, Schumer has just witnessed the first week of President Trump's administration in which labor union leaders are praising a Republican president and business leaders are changing their rhetoric from globalism to Americanism. As Peggy Noonan wrote in The Wall Street Journal Friday, major CEOs meeting with President Trump on his first full day in office "looked happy as frolicking puppies" talking about the president's plans for creating American jobs. A surprised Noonan remarked, "American CEOs. I've never heard them bang on about a need to boost American jobs and manufacturing, ever. They usually talk about targeted microloans in India, and robots."

Schumer also insinuated that Sessions' commitment to civil rights is lacking. He stated, "I am not confident in Senator Sessions' ability to be a defender of the rights of all Americans." But Peter Kirsanow, an African-American commissioner on the U.S. Commission on Civil Rights rebutted Sessions' critics declaring that the Alabama senator "has done more to protect the jobs and enhance the wages of black workers than anyone in either house of Congress over the last ten years."

In ancient Rome, in the struggle between the patrician optimates and plebeian populares, the elites dominated most institutions, but one important office was held by the populares, "the tribune of the people." In the polarized conflict in early 21st century America, while Chuck Schumer assumes the role of leader of the elitist patricians, Jeff Sessions has made his mark as the "tribune of the people," the champion of the American working and middle class of all ethnicities and races — and he will soon become the attorney general of the United States.