Thanksgiving Reads: Why We Celebrate 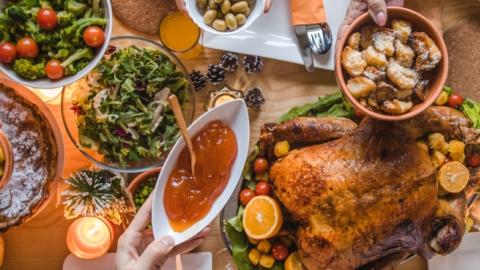 When the Plymouth pilgrims came together with the Wampanoag tribe for a three-day feast in 1621, only half of the men, women, and children who had sailed on the Mayflower a year earlier were still alive. Despite immense hardship and tragedy, the group found many reasons to gather in gratitude.

Nearly four hundred years later, as Hudson senior fellow Melanie Kirkpatrick notes in her book Thanksgiving: The Holiday at the Heart of the American Experience, we continue a tradition that "reflects our national identity as a grateful, gracious, and inclusive people."

Below, join us in celebrating the meaning of Thanksgiving with some table-worthy trivia and a podcast that's perfect for kitchen listening.

From Melanie Kirkpatrick's book, "Thanksgiving: The Holiday at the Heart of the American Experience":

1. Football: Football and Thanksgiving have gone hand in hand since the 1870s and probably earlier. No less an authority than the father of American football, Walter Camp, notes that “in America, the first football was a peculiar Thanksgiving Day custom of kicking an inflated pig’s bladder about the ‘yard’ of New England farmhouses, to the great merriment of the younger members of the household and the occasional discomfiture of the elders.”

2. Charity: Americans have a long tradition of individual giving on Thanksgiving. George Washington, in 1789, donated beer and hot meals to imprisoned debtors in New York. During the Civil War on Thanksgiving Day 1864, hundreds of small donations made it possible for five hundred wounded and sick soldiers at Armory Square Hospital in Washington, D.C. to enjoy a Thanksgiving dinner.

3. Hospitality: An eye witness account to the first thanksgiving meal notes that the Wampanoag tribe, led by Chief Massasoit, “went out and killed five deer,” which they “bestowed on our Governor [Bradford], and upon the Captain.” The generous gift of five deer would provide enough meat to feed the large group for several meals.

4. Thankfulness: Ronald Reagan was the first president to mention Native Americans in his Thanksgiving Day proclamation and their traditions of giving thanks, which “antedated those of the new Americans.” His 1984 proclamation quoted a Seneca Indian prayer: “Give it your thought, that with one mind we may now give thanks to Him our Creator.” Obama paid tribute in 2011 to the Wampanoag “for generously extending their knowledge of local game and agriculture to the Pilgrims.” He urged Americans to “take this time to remember the ways that the First Americans have enriched our Nation’s heritage.”

5. Patriotism: Since the Revolution, Thanksgiving has become a patriotic holiday, a time to give thanks for the blessings of liberty as enshrined in the American system of government. Presidential Thanksgiving Proclamations end with the date expressed in both the ordinary way and as “year X of the Independence of the United States.”

Go Deeper: The Meaning of Thanksgiving
Watch Thanksgiving and the Civil War
Listen A Special Turkey Day Podcast
Read A Thanksgiving to Unite Us
Domestic Policy