The Marijuana Market As An "Essential Service" Threatens Everyone 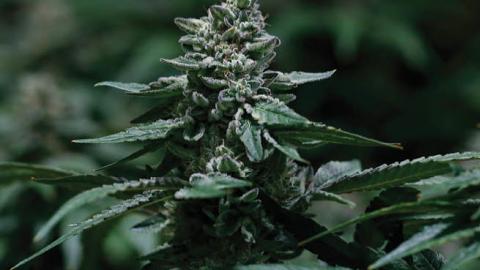 Caption
A plant is seen in a grow room at the NUG cannabis company headquarters in Oakland, Calif., on Thursday, Jan. 23, 2020. John Oram is the CEO of NUG.

Why are marijuana sales being treated as “ essential services ” during this time of COVID-19 shutdowns? Notwithstanding the potential risks, multiple states have carved out exemptions for marijuana commercial dispensaries and/or “medical marijuana” outlets from business closure.

It appears that these decisions rest on dubious characterizations of “essential” economic activities that are not based on principles of sound public health. In fact, once we see the counterproductive, and even dangerous, behaviors that are being enabled, at a time of both public health and economic crisis, these decisions are insupportable.

Certainly it is ironic, when confronted with a disease that destroys respiratory function, that states such as Michigan, Nevada, Colorado and California support the continued consumption of high-potency (THC-laden) marijuana plants and concentrates as an “ essential ” activity, even though the product is consumed by smoking, vaping, or butane-fueled combustion, often multiple times a day.

At issue is not just the means of consumption. Using marijuana itself risks not only respiratory system injury, but further dangers such as psychotic breaks and suicidal ideation. THC is a hallucinogen, and its heavy use is associated with impaired cognition, memory, and even IQ. How can enabling continued use of this drug be medically justified?

Moreover, the decisions often rely on states using a double standard for what counts as a “necessary medicine.” According to the _Washington Post,_ “For many Californians, who rely on marijuana for … stress relief and treating post-traumatic stress disorder and cancer, (dispensaries) obviously serve as pharmacies for a lot of people.”

Yet are actual medical criteria the basis for the exemption? Contrast the marijuana people are acquiring at these dispensary “pharmacies” with other candidate drugs being investigated to mitigate the COVID-19 disease.

When confronted with proposals to dispense some drugs with the potential to protect against COVID-19 infection, public health officials warn that there have not been adequate demonstrations of effectiveness against the virus by the high standards of clinical trails, involving double-blind, placebo-controlled studies with ample numbers for statistical power.

As _The New York Times_ has cautioned, many such studies “were small and did not use proper control groups — patients carefully selected to match those in the experimental group but who are not given the drug being tested. Research involving few patients and no controls cannot determine whether a drug works.”

Yet this reasonable scientific standard is simply thrown out when the drug in question is marijuana. In fact, access to raw marijuana is being fostered despite the absence of any convincing clinical trial outcomes showing safety or effectiveness of its use for any medical condition, sufficient for it to become a prescribe-able, FDA-approved medication.

And we all are being put at risk by these decisions. The first risk presented by continued marijuana use is to the patients themselves, and to those with whom they interact, both their loved ones and in their wider community.

Simply put, using marijuana not only worsens patients’ physical health, making them more susceptible to infection, but marijuana intoxication further distorts their judgment and undermines their responsible behavior, weakening their self-protection and the protection of those close to them.

The second risk is to the first responders and front-line medical personnel, as well as the effective functioning of the emergency services responding to the consequences of drug-using behavior presented in emergency departments. Intoxicated patients come to the emergency department repeatedly, which fact consumes very limited resources, such as personal protective gear.

The use of the intoxicating drug leads to increase likelihood of users becoming infected through their own high risk behavior, by weakened immune responses, and by careless exposure in jammed emergency room situations, where they become potential vectors of further contagion.

And the third risk is to all the citizens of the states that they inhabit, who are trying to “flatten the curve” of epidemic cases and deaths, and thereby fulfill the criteria for a state being “gated” into the next phase of release from strictures that are impeding their economic recovery.

By their impaired judgment and careless behavior, marijuana users risk increasing the infection and fatality rates in the states where they are being supported. Simply put, marijuana intoxication decreases the ability of individuals to protect themselves against the virus, while the presence of the marijuana market decreases the fitness of the community seeking release from the governor-imposed restrictions.

Equally as troubling, commercial marijuana businesses strengthen the hold of a black market in illicit drugs, providing if anything even more jeopardy to drug users and to communities fighting to stave off disintegration from the viral epidemic. As the _Washington Post_ reported, in California, “Untaxed and unpoliced, black-market pot is estimated to be much larger than the legal trade in California.”

Perversely, at a time when communities are struggling to attain the epidemiological criteria that could justify setting themselves free of unnecessary restraints, they are accepting practices which serve to expand the power of marijuana commercial industry -- irrationally protected as “essential services.”

Rather than basing their decisions on public health, have governors capitulated to industry lobbying pressure? As the Washington Post story concluded, marijuana businesses are currently “unable to tap into a federal stimulus package or bank loans,” and that in order to make them more lucrative, Congress should provide “a safety net … (through) access to banking or the ability to tap into federal stimulus dollars.” The industry’s hope? Encouraging Congress to “include marijuana businesses in the next federal stimulus package.”

We should recognize how misguided it is, during a public health emergency, to foster the state-supported dispensing of dangerous substances to the vulnerable (and even, perversely, empowering the black market illicit trade), which actions increase the costs to our communities, both in terms of scarce public health resources, and even lives.