The Obama-Clinton Immigration Agenda Will Mean the Balkanization of America 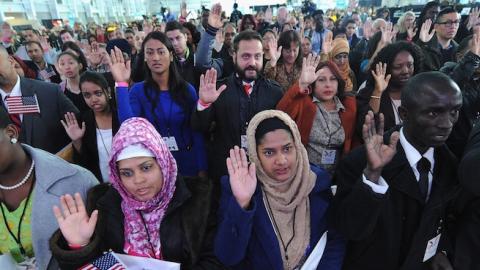 Hillary Clinton has made it clear that she supports and will expand President Obama’s immigration policies. These policies are by now well known: executive amnesty for millions of illegal immigrants (and eventual citizenship); the end (for practical purposes) of border-visa enforcement; large increases in low-skilled immigration (through “comprehensive immigration reform”); and increased numbers of un-vetted Syrian refugees and young Central American immigrants. Much less known is the Democratic strategy for integrating immigrants and refugees into American society. Yet, the Obama administration has developed a very coherent “integration” agenda.

Immigrants Should Maintain (and Further Develop) Their Languages and Culture

One policy document put out by the federal government that is instructive in understanding the core of Obama’s immigrant-integration agenda is a joint policy statement issued by the Department of Health and Human Services (HHS) and the Education Department (ED) on Dual Language Learning (DLL).

The HHS/ED policy statement is eye-opening. It marks the first time in history that the federal government has promoted the idea that immigrants and their children should maintain (and further develop) their home languages and cultures while also learning English. “Children who arrive at school with the natural asset of bilingualism are often not sufficiently supported in their bilingual development, and instead only supported in their English language acquisition,” the policy statement notes disapprovingly. The document also suggests that immigrants are held back by educators’ failure to recognize “children’s cultures and languages as assets” and recommends a series of multicultural principles taken from the Head Start program.

This emphasis on affirming the “culture” immigrants bring from their home countries is reflected in a resource document put out by the Office of Head Start in collaboration with the organization “Bridging Refugee Youth & Children’s Services.” examining differences between Somali Muslim culture and mainstream American culture. As an example of cultural practices to be maintained and respected, the text points to the fact that “Somali men and women may avoid touching or shaking hands with unrelated people from the opposite gender.” It further recommends that education programs for Somali children be places where “children are encouraged to use their home language,” “Somali staff are employed,” and “religious guidelines are understood and respected.” It is lamented that “attending a center-based classroom [i.e., a normal American day-care center] could cause a loss of Somali language and culture or may violate their religion.” How well is such an approach likely to work? National Review's Ian Tuttle visited Minneapolis’s Somali community and described the problems of a refugee policy that “eschews assimilation.” Tuttle reported that the “self-ghettoized” Somali community exists “in tension with its adopted home.” He noted the “terror problem” this tension has caused, as “more than 60 young [American-born] Somali men and women have left Minnesota to join” Islamist terrorist groups.

Immigrants Should Not ‘Prioritize’ Learning English

While the Obama administration promotes “the benefits of bilingualism,” and the importance of maintaining the child’s home language, what about those immigrant families who would like their children to assimilate into mainstream American culture and learn English as quickly as possible? Well, they are considered obstacles.

In a section on “challenges to policy and practice” that must be overcome, the DLL policy document declares: “In an effort to have their children quickly adapt and assimilate to the broader culture in the U.S . . . families may prioritize the learning of English for their young DLL’s, and children may inadvertently lose their home language.” Incredibly, such efforts on the part of immigrants are viewed negatively by the Obama administration.

The document claims “research” supports the “benefits of bilingualism” for individuals operating in a global economy. But the policy document itself admits that high socioeconomic status plays a major role when it comes to reaping these benefits, which would exclude most immigrant children. There is no mention of the abundant research on “long-term English learners.” These are the children of immigrants (and their children) born in the U.S., who have not yet mastered English. Heather Mac Donald has reported that “nationally, 30 percent of all English learner students are third-generation Americans.” For these young Americans, an emphasis, first and foremost, on learning English would be the best preparation for the responsibilities of American citizenship and gainful employment in the “global economy” (in which English, is, after all, the overwhelmingly dominant language).

The White House Goal Is Multicultural ‘Integration,’ Not Patriotic Assimilation

A second policy document put out by the White House Task Force on New Americans and a related fact sheet on the “Citizenship Awareness Campaign” highlight the difference between Obama’s vision for “integration” and what was historically termed “patriotic assimilation.” Indeed, there is no echo of Democrat Barbara Jordan’s campaign for Americanization in the 1990s, while the George W. Bush administration’s specific language on “patriotic assimilation” and “patriotic integration” is notably absent.

Instead of a focus on assimilation into our common culture, Obama’s task force sets the goal of “integration” of separate ethno-linguistic-cultural “communities” into the various American communities in which they reside.

In the past, American presidents have emphasized the life-altering change that occurs when an immigrant renounces prior political loyalties to take the Oath of Allegiance to the United States, leaving one people to join another. By contrast, President Obama, in a promotional video, says becoming an American citizen is “not about changing who you are; it’s about adding a new chapter on your journey.”

In 2015, the Obama administration watered down the Oath of Allegiance by issuing new guidelines stating that some new citizens could ignore the pledge “to bear arms on behalf of the United States.” Current law declares that citizens can be exempted from the military-service clause of the Oath if they show by “clear and convincing evidence” and by “reason of religious training and belief” — “not political, sociological, or philosophical views, or a merely personal code” — that they are conscientious objectors to military service. The Obama administration’s guidance, in direct violation of the law, states that the objector is “not required” to provide evidence, and exempts individuals whose objection to military service arises “from a deeply held ethical or moral code,” which does not have “to follow a particular theology or belief.”

Under the Obama administration, the federal government in 2015 launched a campaign to actively recruit green-card holders, or legal permanent residents (LPRs), for U.S. citizenship through a Citizenship Awareness Campaign. This campaign includes: a multi-media outreach effort in an array of foreign languages to find LPR “customers” for citizenship; promotional videos (including the one featuring President Obama noted above); sending new mobile units into remote rural areas where immigrants and refugees may live; providing grants to and working closely with activist organizations; working to eliminate financial barriers to “customers” by waiving application fees for low-income immigrants; and, according to the White House fact sheet on the program, “increasing low-cost legal services” to LPRs who may “face barriers to accessing affordable immigration-related legal services.”

Democratic Coalition-Building Is the True Objective

How will this policy vision be implemented? The task-force report speaks about the “convening power” of the federal government to coordinate state and local governments, foundations, and non-governmental organizations. Indeed, activist groups are at the center of Obama’s “integration” strategy. Administration documents endorse an array of left-wing groups to assist “integration,” including: the National Partnership for New Americans (NPNA), Illinois Coalition for Immigrant and Refugee Rights (ICIRR), New York Immigration Coalition (NYIC), CASA de Maryland, and the Coalition for Humane Immigrant Rights of Los Angeles (CHIRLA).

The record of these radical groups suggests that at heart the Democratic strategy for “integration” is less about assisting immigrants to become full members in the American polity than it is about churning out reliable Democratic voters. They have spent years fighting immigration enforcement at every turn, while attempting to gut naturalization requirements and register newly eligible voters as quickly as possible. They are nothing like the Kiwanis Club or the American Legion, non-partisan civic organizations that used to help immigrants assimilate. They are partisan street fighters, hostile to the norms of traditional America.

Responding to the Supreme Court’s blocking the president’s illegal amnesty, the executive director of CHIRLA, Angelica Salas, labeled opponents of amnesty legislation as “those who flagrantly despise immigrants.” Describing what she characterizes as a “wave of violent, xenophobic, anti-immigrant dialogue,” Salas declared, “We have to get loud. Louder than we ever have been. . . . We have to get in [their] faces.”

The executive director of CASA de Maryland, Gustavo Torres, is a longtime supporter of Communist causes, from his days working as a Marxist journalist in Sandinista Nicaragua in the 1980s to his continuing enthusiasm for Fidel Castro, including working for the release of five of Castro’s spies from American custody. Representative Dana Rohrbacher (R., Calif.) declared that CASA has “abetted criminal activity” by teaching illegal immigrants to “circumvent the law.” The New York Immigration Coalition, which Hillary Clinton addressed along with other immigration-activist groups in a speech at a conference late last year, complains that attempts by federal authorities to enforce American immigration law constitute a “disgrace.”

Joshua Hoyt, the former chief strategy executive at the ICIRR, worked with then-community organizer Barack Obama and convicted terrorist Bill Ayers on the board of the Woods Foundation as it channeled funds to radical groups. At the ICIRR under Hoyt, “community navigators” — many of them illegal immigrants — helped register new voters, a project praised by Hillary Clinton during a visit to Chicago. Today, Hoyt is even more influential as executive director of the National Partnership for New Americans (NPNA), the core non-governmental organization at the center of Obama’s integration project. While 26 state governors insist on serious vetting of incoming Syrian refuges, Hoyt’s NPNA dismisses their concerns about the American public’s safety. Hoyt openly promotes the goal of, in his words, “cementing the Latino vote into the Democratic coalition.”

The White House Task Force report endorses the work of a group called “Welcoming America,” which it lauds for “promot[ing] mutual respect and cooperation between foreign-born and native-born Americans.” Among the resources the group promotes to assist in this project is a “toolkit” that recommends material examining “structural racism,” white privilege, and the like.

One of the recommended resources in the toolkit is an article by Jamie Grant, a contributing editor of Gender and Sexualities, entitled “Emptying The White Knapsack: Applying Privilege by Redistributing White-Hoarded Power and Resources,” which notes that “white people benefit from racist structures and the racist distribution of power and resources in U.S. society every day of [their] lives.” Grant takes her inspiration from a 1988 essay by Peggy McIntosh, which she describes as “a classic consciousness-raising piece about white privilege.” Grant argues, “Once we get past the idea that racism rests with a few prejudiced, hate-filled individuals and accept that all white people uphold a system of racism in our daily choices and actions, there is a lifetime of anti-racist work ahead of us.” This is the kind of literature that an Obama-administration-endorsed group recommends to assist in the integration of immigrants into the mainstream of American life.

In 1990, in an article entitled, “After Socialism: Balkanization of U.S.,” Charles Krauthammer wrote that after the collapse of “the actually existing socialism” that was Soviet Communism, the “most serious” threat to America was “Balkanization,” the “division of Americans into a hierarchy of legally preferred groups based on race and gender.” Today, mass immigration (legal and illegal) without assimilation (or, more precisely, with “integration” of immigrants understood to mean promotion of identity politics and adversarial multiculturalism) has paved the way for a radical transformation in how we conceive of ourselves as a polity. This effort seeks to replace the traditional ethos of patriotic assimilation, which encouraged new immigrants to think of themselves as Americans first and foremost, with one that prioritizes ethnic, racial, and gender identities over a unifying national identity. There is no doubt that Hillary Clinton would consolidate and expand this project of balkanization. If it succeeds, it could permanently tear the very fabric of American society.