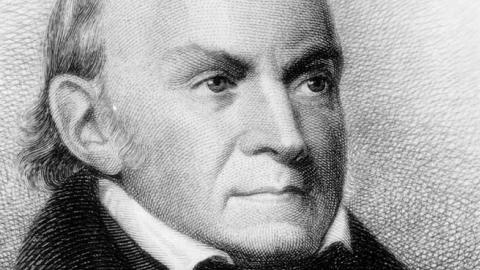 In the fall of 2019, a group of historians and foreign-policy scholars founded the Quincy Institute for Responsible Statecraft. Featuring thinkers such as Andrew Bacevich and Stephen Wertheim and funded by the unlikely duo of Charles Koch and George Soros, the organization named after John Quincy Adams calls for a restrained, noninterventionist U.S. foreign policy. Its stated mission is to “set U.S. foreign policy on a sensible and humane footing” based on “diplomatic engagement and military restraint.” Its mantra is Adams’s pithy quotation that America “goes not abroad in search of monsters to destroy,” which Bacevich contends “has discomfited proponents of militarized liberation or benign hegemony or empire gussied up as social uplift ever since.”

According to documents published on its website, the Quincy Institute wants to “reduce U.S. military operations in the Taiwan Strait,” concede Chinese military dominance in the South China Sea, “significantly withdraw troops” from the Middle East, offer Iran billions of dollars of IMF loans “to fight the coronavirus pandemic,” slash American commitments to NATO, and reduce the military budget.

The recommendations on the Middle East and Iran are of particular note. For among the Quincy Institute’s coterie of experts are numerous figures who have been publicly antagonistic toward Israel and America’s close relations with the Jewish state. These include Lawrence Wilkerson, a bitter critic of “the Jewish lobby in America”; the indefatigable investigators of American Jews’ dual loyalties, Paul Pillar and Chas Freeman; and leading “Israel Lobby” conspiracy authors John Mearsheimer and Stephen Walt.

Bear in mind, the institute is named after a man who in 1825 endorsed “the rebuilding of Judea as an independent nation.” That the anti-Zionist scholars of the Quincy Institute are at odds here with their organization’s namesake is not surprising. In fact, they misunderstand John Quincy Adams’s foreign-policy thinking in general. Bacevich laments, “During the 20th century, particularly its latter half, Americans abandoned the precepts that had guided policy makers back in Adams’s day…. Meddling—always in a worthy cause, of course—became fashionable.” To him, “Adams’s singular achievement, articulated in the Monroe Doctrine, was to position the United States for hemispheric hegemony, while still heeding Washington’s dictum to avoid ‘interweaving our destiny with that of any part of Europe.’” He has also praised Adams for “avoiding unnecessary trouble” and continuing an American grand strategy that “emphasized opportunistically ruthless expansionism on this continent, avid commercial engagement, and the avoidance of great-power rivalries abroad.” Wertheim adds that Adams “came to strongly oppose U.S. expansionism in the 1840s and 50s.”

An informed understanding of Adams’s thought and career not only reveals a man very different from the caricature drawn by noninterventionists, it also provides a set of principles for American foreign policy today. Adams was assertive, even hawkish, in pursuit of American interests, which included not only territorial expansion and security in the Western Hemisphere, but also other interests that spanned the globe. He recognized the key role that Asia and the Pacific would play in the American future, and he confronted great powers to position the United States for its role as a Pacific power. He was a shrewd and exacting judge of power, and as American strength increased, so did his ambitions for his country. Yet he was not a cold-blooded Machiavellian; from the outset, he believed that the U.S. had a special destiny in the world and that its foreign policy must be informed by this purpose.