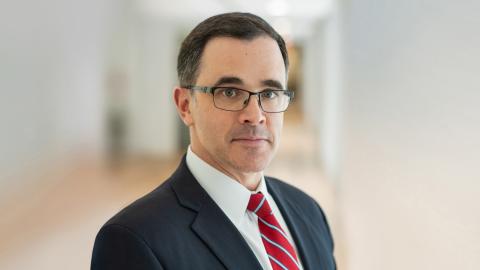 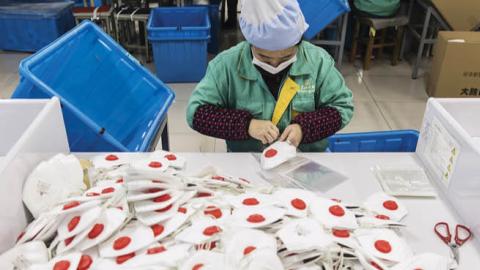 Caption
An employee works on the assembly line to make protective masks at a factory in Shanghai, China, on Jan. 31.

Chinese President Xi Jinping recently warned of the “grave” situation posed by the “accelerating spread” of the coronavirus in China. Xi’s frank warnings were unusual for the seniormost official of the Chinese Communist Party and reveal the depth of the concern at the highest levels of the country’s leadership.

Already, nearly 500 people have died and tens of thousands more have been diagnosed with the novel coronavirus. It has been found in Taiwan, South Korea, Japan, Europe and the United States. Tens of millions have been put under travel restrictions and even quarantine by the Chinese government.

While many are rightfully concerned about stopping the virus, few are focused on the fact that the more it spreads, the more the U.S. ability to treat any Americans who are stricken is vulnerable to the tender mercies of the Chinese Communist Party because of a strategic shift in health care that occurred without debate or decision in Washington.

Everything from antibiotics to chemotherapy drugs, from antidepressants to Alzheimer’s medications to treatments for HIV/AIDS, are frequently produced by Chinese manufacturers. What’s more, the most effective breathing masks and the bulk of other personal protective equipment — key to containing the spread of coronavirus and protecting health care workers — and even the basic syringe are largely made in China. The basic building blocks of U.S. health care are now under Xi’s control.

As Rosemary Gibson, author and health care expert noted, the United States does not produce its own penicillin anymore — the last U.S. based penicillin production facility closed in 2004. Of course, antibiotics may not do any good against the coronavirus, but they may be needed to deal with a related sickness, just as flu often leads to respiratory infections.

This makes the U.S. acutely vulnerable for several reasons. First, China has a record of faulty products and poor oversight that have resulted in recalls, production delays and other problems Americans certainly don’t want to encounter when trying to obtain lifesaving drugs. As Secretary of Commerce Wilbur Ross stated recently, it is time for the U.S. to "consider the ramifications of doing business with a country that has a long history of covering up real risks to its own people and the rest of the world."

Secondly, when it comes to the ravages of coronavirus, there could be significant consequences to the U.S. irrespective of the disease and contagion. With China facing devastation from the virus and taking emergency measures to contain and deal with the illness, it is becoming increasingly isolated from the rest of the world. Normal day-to-day supply chains are being disrupted if not cut off, posing a risk to the flow of medicine and protective gear the U.S. needs.

Then there’s the dangerous flip side of our insecure supply chain: What happens if the Chinese government decides to assert its authoritarian powers more aggressively in fighting the coronavirus crisis by, say, ordering the Chinese pharmaceutical industry to shut down production of antibiotics and other medication to shift to drug production related to coronavirus? The drug industry in China would immediately follow the order.

And these are benign motivations, which can’t be assumed when you’re talking about a regime that has also undertaken the brutal repression of more than 1 million Muslims and is directly responsible for the deaths of pro-democracy protesters in Hong Kong.

What if Xi plans something truly malicious? For example, China isn’t in compliance with its obligations under the Biological Weapons Convention because it “has engaged … in biological activities with potential dual-use applications.” Or, as former White House adviser Gary Cohn once observed, “If you’re the Chinese and you want to really just destroy us, just stop sending us antibiotics.”

Consider the action that Communist Party leaders took to punish Japan in 2010 by shutting down exports of rare earth elements (the basic building blocks of everything from your smartphone to advanced missile technology ) as punishment for a collision at sea between a fishing boat and Japanese coast guard vessels in disputed waters. In a confrontation with the U.S. over Taiwan or Hong Kong, or about a decision to punish a state industrial champion like Huawei over some illicit behavior, it’s not hard to imagine that Xi might see a really bad flu season as an opportunity to leverage his control of medicine production to achieve an end.

So why have we given him that power? The short answer: We didn’t.

The U.S. health care industry made decisions based on the bottom line and shareholder value, while decision-makers in Washington either didn’t know what was happening or were impotent to stop it. The health care industry, like much of the rest of industry, was lured by the promise of lower costs — especially labor — and opted to relocate to China. But shareholder values shouldn’t substitute for national security or the best interests of the American people.

Thankfully, leaders in Congress have started to pay attention. In the fall, Reps. John Garamendi, D-Calif., and Vicky Hartzler, R-Mo., both on the House Armed Services Committee, introduced legislation that would require the secretaries of Defense and Veterans Affairs, two of the largest health care providers in the United States, to assess the threat posed by this dependence and authorize funds to develop U.S.-made alternatives.

The Garamendi-Hartzler bill is a positive step by two national security hawks to draw attention to this important issue. Of course, even if this legislation passed today it wouldn’t fix the problem of the Chinese government’s control over the U.S. health care supply chain. And it certainly wouldn’t address the near-term risks of the outbreak of coronavirus. But it’s a start.

This is just one example of the potential threats of ignoring the emerging 21st century bioeconomy, which will apply unprecedented scientific discovery to innovations in health care, agriculture and computing. Coronavirus is a painful wake-up call to the United States to begin to reclaim the control of our medical supply chain from an untrustworthy foreign adversary.