The Impact of China’s Economic Slowdown on Transatlantic Economies 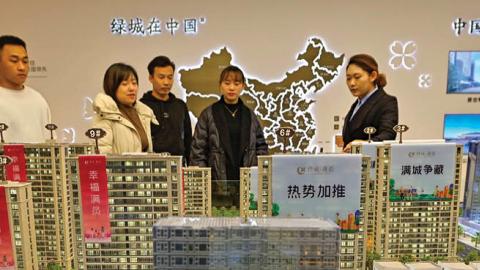 China’s economy faces a significant slowdown in coming years, as I argued in an essay published in December 2021 and excerpted in AspeniaOnline. A worst case scenario would result in an acute crisis with domestic and international political repercussions. Even the reduction in growth now widely anticipated will have serious implications for transatlantic economies and policy responses unless it is reversed.

The most recent economic data from China corroborates the slowdown thesis. In January the International Monetary Fund (IMF) lowered its estimate of GDP growth for China to 4.8% for this year, down from 7.9% in in 2021. It judges the risk of “financial stress” as moderate to high. It also noted that China’s “economic imbalances” have worsened. The fast-developing crisis in real estate markets is the most visible sign of fragility. Real estate sales in January 2022 were nearly 40% below the previous January and have dropped by double digits each month since mid-2021. Defaults among China real estate developers and other corporations totaled over $200 billion by the end of 2021 and continue to grow as property sales and prices spiral downward.

Since the property sector represents as much as 30% of the economy and nearly half of local government revenues, weakness in this sector is of paramount importance. The experiences of Japan in the 1990s and the US and Europe during the Great Recession offer a cautionary note of probable long-term stagnation, especially since in both previous cases the reliance on real estate was less than that of contemporary China.

The property sector is not the only problem with the economy. China has long-standing structural problems which are largely the responsibility of local governments, whose revenues are more than decimated by the real estate crisis. In these circumstances the authorities have little leverage to address the problems, absent taking on more debt in an economy with a debt to GDP ratio exceeding 300%. Chronic underfunding of the social welfare, education, environmental, health care, and social and geographic inequality challenges cannot be adequately addressed with dwindling local government resources. Chinese national security authorities recently warned that such issues can lead to “social instability.”

In addition to this set of problems, President Xi Jinping has turned on some of the most dynamic sectors of the modern economy and targeted highly visible and successful entrepreneurs for disciplinary measures reminiscent of the Maoist era. New regulations affecting private education and health care, social platforms, video gaming and newer financial services are undermining entrepreneurial dynamism. In 2021 new business formation was one third or less the level of business failures. A US stock market index of leading Chinese technology firms fell by 57% in 2021, in strong contrast to a bullish stock market in much of the world last year. Xi now favors state owned enterprises (SOEs), including with state-directed financing, at the expense of private firms. One solution to the real estate implosion being unfurled in recent months is to absorb private firms into local and central government SOEs.

Given these developments, it is unclear what will be the engine of growth in the Chinese economy. The turn toward SOEs and more state-directed financing is unlikely to revitalize growth since study after study shows that the productivity of these firms is far below that of private firms in China and much further below that of competitive western and east Asian firms.

Xi has announced plans to shift toward domestic consumption to gradually rebalance the economy away from debt-driven investment. But as the IMF notes in its most recent review of Chinese economic performance, this “common prosperity” campaign has been disappointing. Domestic consumption fell in 2021 as a proportion of GDP and remains below pre-Covid levels. It is undermined by the real estate collapse, since 80% or more of household wealth is tied up in property. The inability of authorities to expand social welfare and health care provision results in high levels of precautionary savings. Gross savings in China was 42.5% of GDP last year. Population growth has come to a halt and the IMF now predicts that the labor force will decline by 35 million in the next five years.

The high accumulated debt levels (the fiscal deficit was 19% of GDP in 2020 and 15% in 2021) constrain the ability of Beijing to stimulate the economy through further infrastructure and housing investment, although some early indicators this year suggest it may return to this form of macroeconomic stimulus. At least until the fall Communist Party Congress which is expected to re-elect Xi to another term, fiscal realities will most likely not be an impediment to the need for stimulus.

Of immediate concern to Western leaders is that the economic slowdown in China and the associated weakness of consumption will have spillover effects on the global economy. The IMF estimates that a 1% decline in China’s output lowers global growth by one-tenth of that level. The real estate sector alone absorbs 14% of global value added in metals, 6% in mining and 5% in chemicals.

Equally important to Transatlantic economies is that, given the endemic weakness of demand in China, the use of investment, including in manufacturing, leads to overproduction in the goods sector. This policy tool to spur growth continues to dominate in China even as official policy is to rebalance by improving domestic consumption. Gross capital formation has been 43% of GDP since 2016, including in 2021.

China’s overproduction is a proximate cause of chronic trade surplus. China had a record merchandise trade surplus of $676 billion in 2021, including a new high $355 billion with the US. The EU also saw a record €207 billion merchandise trade deficit with China, with the German and Italian manufacturing leaders both in deficit position. The UK saw its deficit with China triple in the first half of 2021 to over £40 billion. It is also notable that a sizable proportion of bond and loan defaults are in instruments denominated in dollars and euros.

The German economy is especially vulnerable. Its export-driven industrial sector has not yet recovered pre-Covid production levels. Auto production there in 2021 remained nearly half its levels of 2017, and it has lost 2% of global market share in this key industry. Volkswagen sales fell by 37% in 2021 in China, as local competitors clawed back market share and the market moved toward electric vehicles. If the US Congress passes Biden plans to provide enhanced tax credits for purchase of electric vehicles made domestically, it would constitute another blow to the EU auto sector.

The impacts on Western economies can only be expected to worsen as the real estate crisis intensifies and China reverts to more debt financing to increase domestic manufacturing and build new technology capabilities to stimulate growth. If China continues to employ draconian lockdowns in major cities to combat Covid, its growth path would be even more at risk.

A strong economy in the US will continue to attract high levels of Chinese products at a time when its annual trade deficits in goods has reached $1.1 trillion. In turn this will strengthen the political incentives to maintain the strong trade and investment measures begun under President Trump. The US Congress is now moving toward passage of a costly Chinese competitiveness bill which would enhance existing import protection tools, export controls and investment restrictions aimed largely at offsetting Chinese mercantilism. It would also fund a program to subsidize semiconductor and some other manufacturing sectors deemed important to national security and technology leadership such as rare earths and advanced batteries.

No doubt such action will stiffen EU determination to match the growing industrial policy across the Atlantic. China is the EU’s largest trading partner. With a growing trade deficit vis-a-vis a China ambitious to dominate global manufacturing and with weaker prospects for growth than the US, 2.5% projected by the IMF compared to 4% for the US, the temptation to impose trade sanctions on China and match US industrial policy will be substantial.

US sanctions and restrictions on technology exports have had a measurable impact on Chinese semiconductor and telecommunications sectors, but more proactive measures to strengthen western economies are also needed to compete with the Middle Kingdom. This is especially important since EU leaders in Germany and France are reluctant to confront China with a similar level of punitive measures.

To maintain the general structure of the post-war trade and rules-based, market oriented economic order, it will be important for the transatlantic partners to reaffirm their willingness to work together to meet the Chinese challenge. They will also need to work among themselves and with Asian partners such as Japan and Australia to rejuvenate older institutions such as the WTO and newer ones such as the Transatlantic Technology Partnership. With some creative economic diplomacy, the Comprehensive and Progressive Agreement for Trans-Pacific Partnership (CPTPP) might be an option for the EU as well as the US. The UK has already begun discussion for joining this trade pact.

Absent renewed cooperation, Chinese mercantilism along with the pressures of its weakening economy will enhance the autarchic tendencies last seen in the 1930s. Xi has already decided effectively to decouple from the West, and only sustained Transatlantic cooperation can hope to offer enough pushback and incentives for China to change course.