Xi Jinping Confronts Economic Challenges of His Own Making 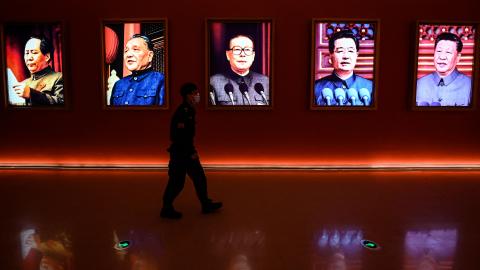 He believes this will make China more resilient to geopolitical shocks arising from worsening tensions with the US.

Can Xi lead China to the economic promised land? In his speech to the Party Congress, he doubled-down on his esoteric dual-circulation policy—or DCP—to get there. The problem is that Xi also recommitted to policies that make it extremely difficult for China to meet his stated economic objective. Hence the perverse irony that Xi is demanding unfettered power to confront economic problems largely of his own making.

There are compelling reasons why Xi’s policies are unlikely to underpin rising private consumption levels as is being promised. The key is to dramatically increase household wealth. One way private citizens try to earn more disposable income is debt-fuelled speculation in an already overheated property market. But wary of housing bubbles, Xi has scolded the people by telling them houses are for living in rather than for gambling with. The other way is increasing across the board wages which is the primary source of disposable income for Chinese citizens.

A major problem is that the fundamental growth strategy and structure of Xi’s political economy is designed to prioritise production with the unintended consequence of suppressing consumption. The permanent stimulus of offering politically driven cheap capital to firms in nominated sectors and demanding they meet ambitious profit and revenue growth targets means the system is incentivised to suppress worker wages. This is reflected in the fact that share of wages as a proportion of GDP has not increased since 2016 and is lower according to this measure than in the mid-1990s and early 2000s.

Indeed, Xi’s fundamental approach to grow the economy is based on suppressing wages to effectively subsidise production. The further unintended downside to throwing cheap capital around is declining growth in total factor productivity, that is, growth that cannot be accounted for by increased capital or labour inputs. Productivity growth since Xi came to power has been declining and is about half the average growth prior to the Xi-era. The consequence is that declining productivity growth serves to further slow wage growth.

The same political and policy approaches are behind the Made in China 2025 plan and the DCP framework. These policies include forcing government and financial entities to allocate capital and opportunity to firms in sectors that Beijing believes are necessary to upscale the entire economy and allow China to dominate exports of these technologies, in the blind hope that all this will somehow lead to increased wages and private consumption.

This would mean the up-ending of classical economic and trade theory by simultaneously achieving rising wages in China and dominate exports of hi-tech and high-value products and services at the same time. This goes against China’s own experience in which it became an exporting superpower due to lower cost inputs than those of its competitors.

Its own economic history shows that as wages in China increased in the early 2000s, lower skilled manufacturing jobs were increasingly taken over by machines or else shifted to lower-cost wage economies such as Bangladesh, Indonesia, India, and Vietnam. This forced huge numbers of low-skilled workers into the informal economy where they earn less and have higher savings rates due to poorer access to safety nets such as health insurance. These social benefits are largely linked to employment in the formal economy.

Indeed, Xi’s state-induced technological upscaling of the Chinese economy by subsidising production, artificially suppressing cost of inputs, and increasing export of these products might benefit high-skilled workers servicing these sectors. But it will worsen the lot of many more low-skilled workers – the very same group of workers Xi says he is fighting for. In other words, seeking to dramatically increase wages by becoming the dominant low-cost global producer of hi-tech products, as Made in China 2025 and DCP envisages, doesn’t make sense.

More broadly, the most significant factor inhibiting more rapid rises in domestic private consumption is Xi’s tightening of his grip over all areas of economic policy.

Under this approach, state-owned firms and national champions are the primary beneficiaries. They are uniquely positioned to receive privileged commercial and funding opportunities. At the same time, firms operating in sectors nominated by the Party as critical or strategic – which state-owned firms and national champions eventually dominate – are considered safer and more reliable borrowers of capital because they are favoured by the government. This is despite figures suggesting the independent domestic private sector outdo state favoured firms on all relevant measures such as return on capital, profitability, and productivity.

However, this would be contrary to the essence of Xi Jinping Thought which is already enshrined in the Party’s constitution. Clearly, ruthlessness and cunning in securing absolute power is no guarantee of wisdom.