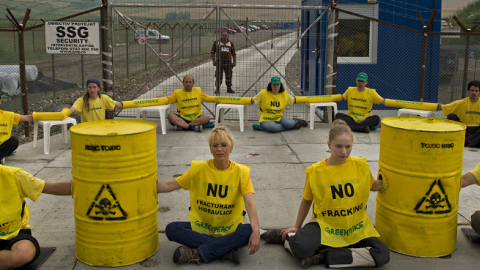 If you were thinking that the shoot-down of Malaysia Airlines MH17 and the death of 298 innocent people including Europeans, will finally force NATO to get tough with Russia's Vladimir Putin, think again.

Europe's politicians fear someone else even more than they fear Putin. It's their own green parties and environmental groups like Greenpeace and Friends of the Earth, who are now holding Europe hostage to Putin's power -- and are as much a tool of Russian interests as the separatists who shot down MH17.

Europe depends on Russia's Gazprom for its natural gas needs -- up to 30 percent in the case of the European Union, more for Eastern Europe.

It's been the implicit threat of cutting off that supply, and literally letting Europe freeze over this winter, that's allowed Putin to do what he likes in Ukraine and Crimea.

Yet Europe itself sits on an estimated 639 trillion cubic feet of natural gas reserves. That's half the size of the reserves in Russia, which is the biggest reserve in the world.

Even so, European “grass-roots” environmental groups since 2008 have used alarmist fears about hydraulic fracking contaminating underground water supplies (even though the shale gas lies deep below the aquifer) and emitting greenhouse gases to shut down every effort to tap into those abundant reserves.

In Germany, where Exxon Mobil opened some exploratory wells back in 2008, green activists forced the government to impose a moratorium on all fracking.

France and Bulgaria have imposed outright bans. Protests also shut down efforts at fracking in Poland, and they are trying to do the same in Great Britain.

It’s a campaign that dovetails so neatly with Putin’s grand strategy that’s hard to believe it’s a coincidence.

Greenpeace issued a vociferous denial, saying, “the idea that we’re puppets of Putin is so preposterous that you have to wonder what they’re smoking over at Nato HQ.”

But is it really all that preposterous? Certainly many of Putin’s own statements about fracking, such as warning attendees at an international economic conference that it will make “black stuff come out of the tap,” makes him sound like a true blue Green.

So does Gazprom's warning that fracking involves “significant environmental risks,” including ground water contamination, the same falsehood many anti-fracking groups repeat in this country.

Moreover, Putin spent his career in the KGB, which had an entire department devoted to spreading disinformation as part of its “active measures” against the West.

We know Soviet intelligence agencies helped to sponsor opposition to Ronald Reagan’s installation of Pershing missiles in Europe in the 1980’s, and secretly gave $1 billion to peacenik groups during the Vietnam War — more money, Soviet defector Stanislav Lunev recounted in his memoirs, than it gave to the Vietcong.

More recently, we know money from the oil-rich United Arab Emirates paid for the 2012 Matt Damon anti-fracking movie, "Promised Land," and that Damon and his producers happily took it.

Why assume green groups in Europe are more particular, or any less ignorant of whose interests they are really serving?

Ukraine, for example, sits on nearly one-third of Europe’s shale gas reserves. Yet when the government was about to close a deal with U.S. companies to open those reserves, environmental protestors mysteriously rose up to shut it down.

Much the same happened in Lithuania, Bulgaria and in Poland. Yet these are the countries most dependent on Russian natural gas, and the ones most directly threatened by Putin's next move.

So, are Greenpeace and similar groups really Putin’s fifth column, or simply the “useful idiots” Lenin talked about, who in this case don’t mind costing their countries jobs and wealth, but also their self-respect?

It’s hard to say. But it’ll take more than one airline shoot-down, or the next Putin annexation, to make Europeans realize they are dealing with a threat to their freedom much closer than the Kremlin.