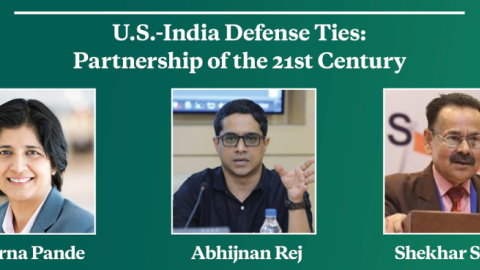 Director Initiative on the Future of India and South Asia, Hudson Institute

The first two decades of the twenty-first century have witnessed a deepening of the US-India relationship, especially in the defense arena. From almost no defense trade before 2000 to $20 billion in 2020, from little cooperation in the military arena to India becoming a Major Defense Partner of the US in 2016, and from little synchronization in the defense arena to strong cooperation in the Indo Pacific, and the two countries conducting more bilateral military exercises with each other than with any other country. Between 2002 and 2020, India also signed the foundational or enabling defense agreements that US signs with all its defense partners: GSMOIA and ISA, LEMOA, COMCASA, and BECA.

Will the India-US relationship finally become the key American partnership of the next century, something Vice President Joe Biden spoke of as early as 2006? To discuss that and more Hudson Institute invites you to a panel discussion with Abhijnan Rej, Security & Defense Editor at The Diplomat and Director of Research at Diplomat Risk Intelligence and Vice Adm (retd) Shekhar Sinha, former Chief of Integrated Defence Staff and former C-in-C Western Naval Command. The panel will be moderated by Dr Aparna Pande.