Skip to main content
Past Event
Virtual Event | Showdown at the IAEA: The Future of Iran’s Nuclear Program
Tuesday 8:00 - 9:00AM
Register for Event

Virtual Event | Showdown at the IAEA: The Future of Iran’s Nuclear Program 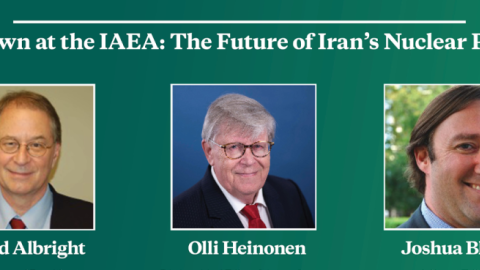 Founder and President, Institute for Science and International Security

As talks between Iran and the United States and other signatories to the JCPOA drag on, Tehran’s nuclear weapons program continues its dangerous advance. Reports that Iran is now enriching uranium from 5% to 60% indicate that the program could be approaching the point where it could “breakout” with the ability to develop nuclear weapons. In addition, the regime is pursuing a sophisticated strategy to create “a sense of crisis” by flouting the IAEA inspection requirements of the 2015 deal—including blocking access to more than 20 undeclared nuclear weapons development sites. How can the IAEA and the global non-proliferation regime maintain credibility if Iran is not held accountable for its massive illicit and undeclared nuclear weapons work? Join Hudson Institute for this important discussion.