A Guide to the Trump Administration's China Policy Statements 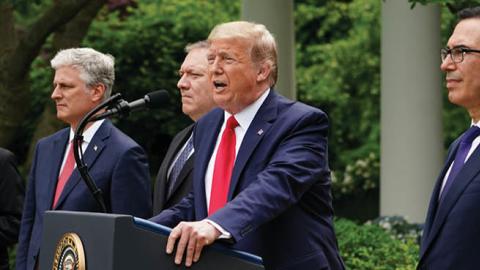 United States policy toward China is the preeminent strategic issue of our time. In the last several years, the U.S.-China relationship has undergone its most dramatic changes in over forty years. This report is a guide to the Trump administration’s most important policy statements on China, going up to July 23, 2020. It organizes nearly two hundred statements into seven major themes, based on discussions with the president and his senior advisors. Each document, interview, and tweet is hyperlinked.

The Trump administration has issued thousands of pages about its China policy, many of them showing continuity and consistency with previous administrations. Therefore, the statements excerpted in the report are only those that show significant differences from previous policies. These selections also rely on advice from many senior officials about what the administration considers to be its most significant statements.

The report has two tables of contents. The first is arranged by policy area and organizes the statements into seven categories, beginning with more than sixty of President Trump’s interviews in his own words and tweets. The remaining six categories are organized according to the many challenges addressed by the president’s cabinet secretaries and their assistants. These six categories include issues such as removing unfair trade barriers; preserving American global economic primacy; maintaining dominance in space and the U.S. Space Force; forming a global coalition against technology transfer threats; reducing U.S. dependence on critical materials; rebuilding the U.S. military in the Indo-Pacific; addressing China’s human rights violations as “the stain of the century”; rejecting China’s Belt and Road Initiative; designing a new approach to China’s compliance with the World Trade Organization; creating new approaches to the Arctic, South Pacific, and Africa; and withdrawing from the World Health Organization after it mishandled China’s role in the COVID pandemic. The administration’s most recent authoritative statement was delivered July 23, 2020 by Attorney General William Barr at the Gerald P. Ford Presidential Museum.

All the statements are public and designed to be public. Administrations usually are guided by classified policy documents that remain closed to research for at least thirty years. For example, President Truman’s well-known Cold War strategy, NSC 68, which he signed in 1950, was not made public for twenty-five years. President Reagan’s strategic decision documents, such as NSDD 75 and NSDD 166, which he signed in the mid-1980s, were not released publicly for more than twenty years. We may safely assume the Trump administration strategy toward China has been guided by such documents. For the time being, however, the public statements in this report offer a guide to new features of U.S. policy toward China.