It acknowledges the threat from China, then makes wholly unrealistic pledges of cooperation. 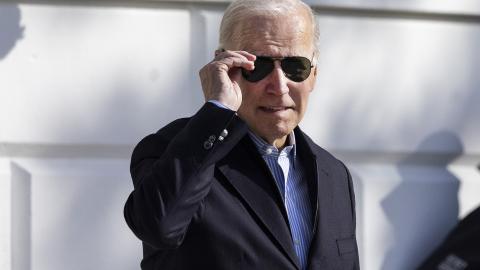 Caption
Joe Biden departs on the South Lawn of the White House on October 12, 2022, in Washington, DC. (Kevin Dietsch/Getty Images)

The Biden administration’s National Security Strategy, released last week, deserves credit for correctly identifying China as the US’s most “consequential geopolitical challenge.” But by calling climate the “existential” threat to the US and encouraging cooperation with Beijing on the issue, the strategy document creates a dangerous contradiction. The focus on climate will make it harder to meet the threat from China and diminish the chances that the US will succeed in sustainably reducing carbon emissions.

China has benefited from the openness of the international economy even as Beijing “frequently uses its economic power to coerce countries” while limiting access to its own markets, the strategy points out. The document reaffirms the link between economic strength and national security, recognizing that the US needs to produce goods, tie trade policies to the well-being of the American people, and retain its competitive edge across key technologies. It also affirms that a successful US approach to China will require the help of allies and partners, since the US and its allies make up about 65% of global gross domestic product.