Whether migration is decided by Davos, by the migrants, or by the demos will determine the direction of the West in the 21st century. 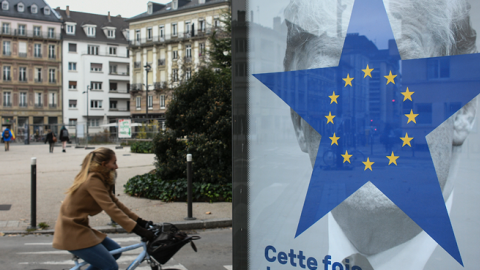 Caption
A cyclist rides near a street poster depicting the twelve-star circle from the European Union flag within a blue five-pointed star covering the face of what is deemed to be a portrait of US President Donald Trump. (SEBASTIEN BOZON/Getty Images)

p(firstLetter). If migration is ‘the biggest challenge of our time’ — the key issue is: who will decide this challenge? There are three possibilities: supranational institutions (let’s call this ‘Davos’); the migrants themselves arriving without the consent of the people in the nations that are affected; or the demos — the citizens of democratic nation-states.

Whether migration is decided by Davos, by the migrants, or by the demos will determine the direction of the West in the 21st century.

The challenge of migration is at the heart of the most important question in politics going back to Plato and Aristotle: Who governs? Supranational institutions or democratic nation-states? Transnational elites, unaccountable to any democratic people or the citizens of a nation?

President Trump has described the coming conflict as one between ‘patriotism’ and ‘globalism’. Today, sovereign self-government is challenged within the democratic world — and within the West — by the ideological and material forces of transnational or global progressivism.

The ‘Party of Davos-Global Governance-Transnational Progressivism’ is supported by an interlocking network of transnational elites including international lawyers, judges, bureaucrats, and activists housed at institutions like the United Nations, the European Commission, the European Court of Human Rights, leading global corporations, NGOs, and within the governments of many Western nation-states.

These groups have a symbiotic relationship. John Bolton has referred to some of their practitioners as the “High-Minded.” This network promotes two complimentary ideologies: supranationalism abroad and multiculturalism at home.

With supranationalism, decision-making authority is transferred from democratic nation-states to unelected global institutions which are unaccountable to any particular demos or people.

With multiculturalism, individual citizens and the nations themselves are divided into adversarial groups — some of them designated as dominant or oppressor groups (e.g. males, native born citizens, Christians) others are considered marginalized or victim groups (women, ethnic and sexual minorities, illegal immigrants).

The end goal of the global governance project — implicitly and sometimes explicitly — is the fundamental transformation of the Western democratic nation-state into a regime that is subordinate to global rules which are designed by global experts externally, and subject to multicultural strictures internally. It is a regime ruled without the consent of the governed.

Let’s look at some specific examples.

In the United States, the state of California has changed drastically due to mass immigration, legal and illegal. California has imported poverty, driven large numbers of the middle class from the state, and radically altered its politics.

Victor Davis Hanson writes that California now ranks 49th out of 50 states in the number of residents who have not finished high school. On public school tests, California ranks 45th of 50. One in three of all federal, state, and local welfare recipients in the United States live in California. About 20% of the state lives below the poverty level.

This is the result of the perpetual mass migration of low skilled, poorly educated people into a political-economic-cultural system that promotes multiculturalism instead of assimilating legal immigrants and, most importantly, limiting their numbers.

Another result of mass migration is that California politics have changed dramatically. Ronald Reagan was Governor of California in the 1970s. Today no conservative could be elected to state-wide office. There are 46 Democrats and only seven Republicans in California’s congressional delegation. That is a ratio of 6 ½ to 1 in favor of the Left.

Historically the United States assimilated large numbers of immigrants, economically, culturally, and patriotically. We were successful for two reasons: first, previous American elites insisted on ‘Americanizing’ immigrants and rejected multiculturalism; and second, and even more importantly, there was a 40-year period of restricting immigration to a very small number. In the past, this made it possible for assimilation to succeed.

The challenge in Europe

Several speakers at this conference [the MCC Summit on Migration] have written books examining the consequences of mass migration in Europe. This includes restrictions on traditional Western freedoms, particularly freedom of speech.

Christopher Caldwell wrote of the “criminalization of opinion” in part because of fear, as European elites attempt to keep domestic peace among Muslim migrants, and in part, guilt over past colonialism and racism.

Douglas Murray wrote that mass immigration has completely altered Britain. He notes that some people have argued that Minister for Immigration and Asylum in the Labour government in 1997, Barbara Roche, launched a deliberate policy of societal transformation — a type of a ‘culture war’ against the British people — using immigration as a “kind of battering ram”. He writes that in 2015, German Chancellor Merkel asked Facebook CEO Mark Zuckerberg what could be done to stop citizens criticizing her migration policy on Facebook? Zuckerberg answered, “we are working on that.”

My colleague Nina Shea and her co-author Paul Marshall have written how so-called ‘hate speech’ laws using apostasy and blasphemy codes have restricted criticism of (and within Islam) and of migration in Western nations.

Further, the United Nations has promoted enhanced enforcement of hate speech that is being interpreted to include narrow Islamic definitions of blasphemy.”

All of these authors — Caldwell, Murray, Shea, and Marshall — describe the Western response to mass migration as one based on fear, guilt, and a lack of confidence in the positive aspects of their own civilization.

We constantly hear about xenophobia, and the fear and hatred of things foreign, as if large sections of the Western population and right-of-center political parties were xenophobic. As philosopher Roger Scruton has suggested it is more likely that many among Western transnational elites are afflicted with oikophobia (fear and loathing of one’s own) or perhaps xenophilia (preference for alien cultures over one’s own).

Let us look at UN Global Compact for Migration. The agreement is weaponized. It is a mechanism that will be used to transform democratic nation states. It is designed to facilitate global governance and multiculturalism and weaken independent nations.

The Compact states as a guiding principle that migration is a global good. It states: “Migration contributes to positive development outcomes.”

Other objectives in the Compact state that detention of illegal migrants should be a last resort and that, preferably, they should be placed in migrant communities; that individual illegal migrants should have lawyers and that all legal remedies should be exhausted before they are deported; that they have access to all welfare and social services; that border security officials should be trained in non-discrimination by experts (NGOs); and that nations should quote “support multicultural activities.”

Objective 17 states that nations are to:

* “Promote awareness-raising campaigns …. to inform public perception … [of the] positive contributions …. of migration.”
* “Promote quality reporting … by sensitizing and educating media professionals on migration issues and terminology …. [and] stop support for media outlets that discriminate towards migrants.”
* “Establish mechanisms to detect and respond to ethnic and religious profiling of migrants by public authorities.”
* “Work in partnership with Human rights institutions (NGOs) to ensure access to effective complaint mechanisms.”

Translated into non-Orwellian, non-global bureaucrat language this means that states are to conduct propaganda in favor of migration and censor and suppress of anything critical of migration or migrants.

The UN Global Compact is labeled ‘non-binding’, but it is a mechanism to limit the control of democratic nation-states over their own immigration and integration policies.

I have been mostly negative so far; but let me look at the bright side.

The forces of democratic self-government, democratic sovereignty are on the march in Europe and the Americas — with the election of President Trump, with what is going on in Hungary, Poland, and the Visegrad countries, and in Western Europe.

In Italy, Spain, Britain, France, and elsewhere ordinary citizens want their self-government back. Increasingly political parties — from Likud in Israel to the new government in Brazil — emphasize democratic sovereignty and patriotism. Last year President Trump told the United Nations. “[s]overeign and independent nations are the only vehicle where freedom has ever survived and democracy has ever endured.”

Writing in the 18th century, Alexander Hamilton declared that the purpose of the young American republic was to determine whether good government could be established through reflection and choice rather than accident and force. Mass illegal immigration is not something that democratic peoples have consented to by reflection and choice — but instead is centered on accident and, in some cases, force with violent criminal gangs.

The challenge of mass migration is at the center of the great conflict of our time between societal transformation and societal reproduction or transmission.

Transformation or transmission? Are our societies, nations, cultures — and our civilization — going to be transformed against the will of our citizens by global elites? Or do democratic peoples exercise their right of societal reproduction — that is, the right of free peoples to reproduce themselves, to transmit, to pass on their core traditions, principles, habits, mores, cultures, and their civilization to their children, grandchildren, and to future citizens and future generations? In the American Constitution this is referred to as “securing the blessings of liberty for ourselves and our posterity.

President Trump declared in Warsaw in 2017: “The fundamental question of our time is whether the West has the will to survive.” We are witnessing expressions of that will to survive being exercised yesterday, today, and tomorrow in this MCC international Summit on Migration.