Skip to main content
Reports
Europe Against Kleptocracy: A Plan to Combat Corruption and Illicit Finance 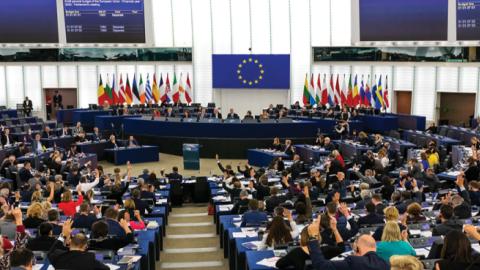 Caption
Members of the European Parliament vote in plenary on the European Union's draft budget for the fiscal year 2020. (Philipp von Ditfurth/picture alliance via Getty Images)

Millions of European citizens view the European Union as an enabler, rather than an enemy, of corruption. Populists and strategic competitors have successfully framed EU institutions as opaque and compromised, pointing to cases of abused public funds, hidden offshore wealth, and backdoor influence by private lobbyists in Brussels. The result has been to strengthen the hand of foreign adversaries like Russia and to weaken global confidence in the integrity of the European project.

THE CAUSE: Illicit Finance is Everywhere

The source of the crisis is systemic. Kleptocrats both within and beyond the EU all take advantage of the same architecture of offshore global finance that guarantees them an efficient and anonymous way to move their money. These illicit financial networks amount to a major political and security threat to the EU. Decades of globalization and technological transformation mean these “foreign” threats are deeply intertwined with “domestic” regulatory failures.

Strategic competitors are exploiting Europe’s open doors to illicit finance and influence for sale in politics. Hostile actors such as Russia and China are laundering illicit financial flows through EU financial institutions, concealing unlawful activities through loopholes in EU law, and establishing lobbying networks in EU capitals to further their strategic interests.

THE SOLUTION: Europe Must Act

Following successive revelations of money laundering and kleptocratic influence in EU democracies, urgent and expansive action is necessary. The EU has unique powers to introduce new norms and institutions to tackle the root causes of corruption in the global economy. By marshalling these powers and building new cleanup authorities, the EU can not only become a global champion of transparent governance, but can regain the trust of the European public and restore confidence in the European project as a whole. Making Europe an effective geopolitical actor abroad requires the same reform agenda necessary to defeat populism at home.