France’s stock is currently high in Delhi after it supported India’s stand on Kashmir at the UNSC. 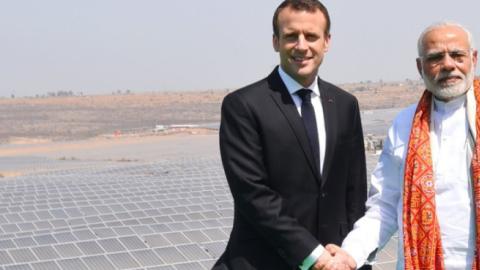 Prime Minister Narendra Modi is visiting France for his third state visit and fourth trip. Modi and French President Emmanuel Macron are expected to discuss a gamut of issues ranging from trade and economics to energy security, counter-terrorism, defence and security cooperation and collaboration in the Indo-Pacific.

France seems to have replaced Russia as India’s trustworthy friend and partner in the Western world.

France’s stock is currently high in Delhi after it supported India’s stand on Kashmir at the UNSC closed-door meeting called by China. The French have also previously backed the UNSC resolution on global terrorist Masood Azhar and pushed for stronger FATF sanctions on Pakistan.

During the Cold War, the erstwhile Soviet Union was India’s veto-providing friend in the UN Security Council. It was the country who understood India’s national security interests, especially with respect to Pakistan and Kashmir. Soviet Union also provided India with economic assistance and defence equipment.

India and France have built a deep economic, security and diplomatic relationship over the last few decades that has spanned the Cold War era and strengthened in the last decade or two. France has become the new Russia – the new best friend.

For a country that values symbolism as much as India does, the importance of France is noticeable in that it is the only country whose presidents have been chief guests at India’s Republic Day Parade for a record five times (1976, 1980, 1998, 2008 and 2016). Both old ally Russia/Soviet Union and close neighbour Bhutan come second, and only one US President has ever been a Republic Day guest – Barack Obama, in 2015.

As a post-colonial country, India’s relationship with former colonial power, The United Kingdom, is conflicted. While there is a strong diaspora linkage as well as an economic and security relationship, New Delhi is often sceptical about London understanding Indian concerns especially when it comes to issues like terrorism, Pakistan and Kashmir.

So, throughout the Cold War years, India needed an ally – with veto power- on the Security Council – and that was Soviet Union. Today, Russia has closer relations with China and is not as cognisant of India’s interests especially when it comes to Pakistan, Afghanistan and terrorism. France appears to have moved into the Russian vacuum.

A friend at the UN and NSG

India’s relationship with France, another former colonial power, has less baggage. France established diplomatic relations with India in 1947, the two countries signed a treaty in 1956 under which in 1962 France ceded full sovereignty over its colonial territories. From 1963 onwards, Pondicherry, Karaikal, Mahe and Yanam became part of the Union Territory of Pondicherry (now Puducherry). This was in sharp contrast to France’s European neighbour Portugal, which was reluctant to cede its colonies (Goa, Daman and Diu) resulting in an acrimonious relationship ending in the Indian military takeover of Goa in 1961.

Among the permanent members of the UN Security Council, France has been consistent in supporting India’s bid for permanent membership of the UNSC. The two also share a similar goal on issues like climate change. India is a signatory to the Paris agreement of 2015.

France was also among the few countries that did not condemn India’s nuclear tests in 1998 and instead chose to start a strategic dialogue with India that resulted in a strong strategic partnership in the areas of space, security, defence and civil nuclear cooperation. Going back to the Cold War era, when in response to India’s nuclear explosion of 1974 the US suspended delivery of nuclear fuel to the Indian atomic power station at Tarapur, France stepped in to supply enriched uranium.

In September 2008, three weeks after India received a waiver from the Nuclear Suppliers Group (NSG) to conduct civilian nuclear trade and two days after the US-India civil nuclear deal was ratified by the US Congress, France and India signed an agreement for civil nuclear cooperation. France has also supported India’s bid to be a member of the Nuclear Suppliers Group.

Defence cooperation between the two countries is multi-dimensional with institutional exchanges, joint production, joint military exercises and training. The three Indian services hold regular annual military exercises with their French counterparts. In July 2009, a 400-strong Indian armed force contingent participated in the Bastille Day Parade, France’s national day parade, with then Indian Prime Minister Manmohan Singh in attendance. This was the first time Indian troops had participated in the national day parade of another country.

France is one of the leading suppliers of military equipment to India with the Dassault Mirage 2000 fighter, a squadron of DCNS Scorpène-class submarines (called Kalvari-class submarines) and 36 Rafale jets being at the top of the list.

At the end of the day, however, India’s goal is to build its domestic defence industry and for that, the United States or Russia are still India’s partners of choice, especially from the point of view of high-end technology and foreign investment.

Bilateral trade between India and France stands at €10.7 billion, with over 1,000 French companies in India amassing a turnover of US$ 20 billion and 120 Indian companies in France with an investment stock of €1 billion. While the two countries are strong economic partners, when India sees France, it views it as a part of Europe. The European Union is India’s largest bilateral trading partner with €115 billion traded annually in goods and services.

In March 2018, India and France signed a logistics agreement whereby the two countries would open their naval bases to each other’s warships for refuelling, repair and birthing facilities. The two countries are also collaborating in Francophone Africa with the aim of identifying developmental activities that the two could work on together.

Like Japan, France is another country India is comfortable working with as there is no baggage or mistrust.

The two countries share a similar strategic outlook. Both have a strong sense of national pride in their civilisational and cultural heritage. Both share a healthy scepticism of American policies, and while both are American partners, both believe in issue-based agreement or disagreement. Independence in foreign policy decision making – or strategic autonomy as India refers to it – is something that France is comfortable with.

India and France have an old relationship and their strategic partnership will be strengthened during PM Modi’s current visit. However, it is the military and economic rise of China and the fear of an isolationist America that underlines each country’s search for friends and allies around the world.

Read in The Print.