Putin’s strategy is to wait out the West. Calls for negotiations serve that objective. 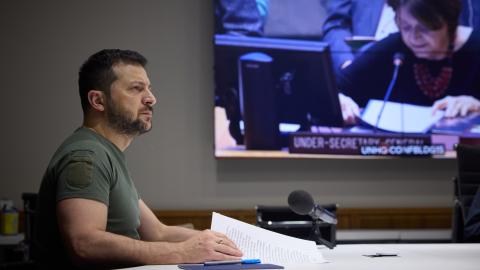 Caption
Volodomyr Zelensky meets virtually with the UN Security Council on November 22, 2022, in Kyiv, Ukraine. (President of Ukraine via Flickr)

President Volodymyr Zelensky’s address to Congress last month came at a crucial time—not only because Ukraine continues to grind through Western materiel, using it to dislodge and destroy entrenched Russian troops, but also because chatter is picking up in Washington about a settlement to end the war.

The initial calls for negotiations came in October from the Congressional Progressive Caucus, which collapsed in infighting and recrimination. But in recent weeks there have been renewed calls from more prominent voices.

A few days before Mr. Zelensky arrived in Washington, Henry Kissinger wrote an article urging the West to press Ukraine for “peace through negotiation.” Such a peace would see Russia relinquish all the territory it gained this year, with the rest of the Russian-occupied territory in Ukraine being the “subject of a negotiation after a ceasefire.” All the while, the West would work toward formulating a “new international structure,” in which Russia would eventually “find a place.”