Pakistan Cannot Afford a Showdown With the West 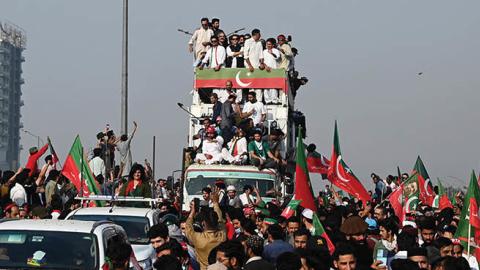 Former Pakistani Prime Minister Imran Khan continues to protest his loss of power, calling for a revolution against what he describes as Pakistan’s subservience to American interests. Some of the protests have resulted in violence. Pakistani authorities are hopeful that they will hold back Khan’s agitation, which is supported by some Islamists, his own cult-like followers and anti-American retired military officers. But the damage Khan is causing to Pakistan’s relations with the United States and western countries might be more difficult to contain.

Khan, who once described Osama bin Laden as a “martyr,” claims that his removal from office through a parliamentary vote of no confidence was the result of a U.S.-backed conspiracy. It seems difficult for him to understand that the U.S. has its hands full with other international issues and was just not interested in him or Pakistan enough to want to engineer regime change.There is a benign lack of interest in Pakistan among U.S. policy circles, which diplomats from both countries are struggling to reverse. Imran Khan and Pakistan’s domestic politics have received little attention in Washington for some time. The U.S. withdrawal from Afghanistan has led many American policymakers to take a break from dealing with Pakistan and the complicated U.S.-Pakistan relationship, as well.

The U.S., of course, would not be able to ignore Pakistan forever, and Pakistanis would have to accept scrutiny of successive governments’ support for terrorism before both countries reengage. Engagement would have to be without illusions on both sides. But Khan’s incendiary rhetoric makes reengagement more difficult.

Americans do not want to give credence to Khan’s claims of collusion between his domestic opponents and the U.S. by moving too quickly to repair the damage from two decades of Pakistani support for the Taliban and from conspiracy theories of the kind Khan continues to spread.

Pakistan’s economic needs, however, dictate that Pakistan should mend fences with the U.S. and its European partners as soon as possible. Notwithstanding all the talk about China being Pakistan’s “all-weather friend,” the United States and the European Union are Pakistan’s key trading partners.

Pakistan frequently turns to Western-led multilateral financial institutions, including the International Monetary Fund (IMF) and the World Bank, and cannot escape western influence at the United Nations and its Financial Action Task Force (FATF), which has kept Pakistan on its money-laundering and terror-financing watchlist since 2018.

Although Khan has made his followers believe that Pakistan could do well by partnering with Russia instead of the West, his assertions do not hold up under scrutiny. In 2020, Pakistan’s exports to Russia stood at $279 million while imports from Russia amounted to $699 million. The same year, Pakistan exported $4 billion worth of goods to the U.S. and $6 billion to the EU. Last year, Pakistani exports to the U.S. reached $6.1 billion and to the EU amounted to $6.6 billion.

These numbers reveal the irrelevance of Khan’s ideological rhetoric about a renewed “freedom struggle” from western influence. For Pakistan, it made little sense when Khan showed up at the doorstep of Russian President Vladimir Putin on the day when Putin invaded Ukraine. It was a poke in the eye of Pakistan’s multi-billion-dollar trading partners, the U.S. and the E.U., to curry favor with Russia, a minor player in Pakistan’s economy.

While in office, Khan had turned for help with the country’s economy to the Washington-based IMF, which has provided 22 bailouts to Pakistan since 1958. On the brink of default, Pakistan needs an inflow of $41 billion over the next year to pay back loans that are coming due and to keep afloat. Its economy still depends on a lifeline from the IMF, while Russia is in no position to help Pakistan, and China has adopted a wait-and-see approach.

Pakistan’s Middle East friends, Saudi Arabia and the United Arab Emirates, have made further assistance to Pakistan conditional on implementation of economic reforms proposed by the IMF.

Against the backdrop of Pakistan’s economic realities, Khan’s anti-West rhetoric resembles that of Iranian and Venezuelan leaders, as does his talk of an anti-Western revolution. Chants of “Down with America” are a staple at protests by Khan’s Pakistan Tehrik-e-Insaf (PTI) party. A provincial minister from Khan’s party was quoted in a report on one rally as saying, “We have come out to support Imran Khan, who has challenged the capitalist forces.”

Of course, Khan and his supporters are far from challenging the global capitalist order and are unlikely to prevail even in Pakistan. Khan’s attacks on Pakistan’s current military leaders and his threats that he will make Pakistan ungovernable if elections are not immediately held might result in Khan’s arrest on charges of inciting riots. But Khan will leave millions of Pakistanis believing the fantasy of revolution and the view that Iran and Venezuela might be worthy role models.

Both those countries are suffering economically even though they are oil exporters. Pakistan does not even have the economic cushion that comes from being a major producer of a commodity like oil. Instead of letting Khan’s demagoguery cause long-lasting damage to Pakistan’s ties with western countries, Pakistan’s civil and military leaders must explain to Pakistanis that their country cannot afford a showdown with its economic partners and benefactors.

This article also appeared in The Print