Putin’s Annexations May Cost Him Crimea 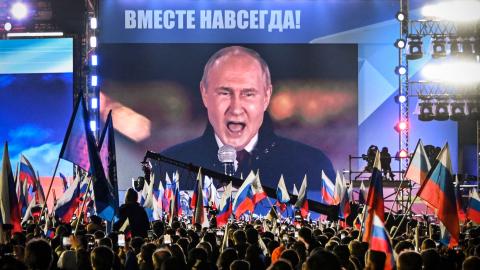 Caption
Vladimir Putin on a screen set at Red Square in central Moscow as he addresses a rally marking the annexation of four regions of Ukraine on September 30, 2022. (Alexander Nemenov/AFP via Getty Images)

Vladimir Putin hopes his formal annexation of four regions of Ukraine will help him salvage victory. It matters little to him that none of the annexed areas are fully occupied by Russia, or that Ukraine continues to gain ground against listing Russian forces. For Mr. Putin, the so-called annexations let him claim success to reassure an increasingly nervous domestic audience. While there’s a certain logic to his claims, they are shaping up to be another strategic blunder.

One can see why Mr. Putin thought this was a good idea. The supposed annexation brings these lands under Russia’s nuclear umbrella. Given how often Mr. Putin has rattled his nuclear saber in recent weeks, this is a dangerous development. More broadly, the annexation is a way for Mr. Putin to assert that he is returning “historic” lands to Russia. Mr. Putin is spinning it as a victory, preening during Friday’s annexation announcement, “There is nothing stronger than [these regions’] determination to return to their true historical homeland.”