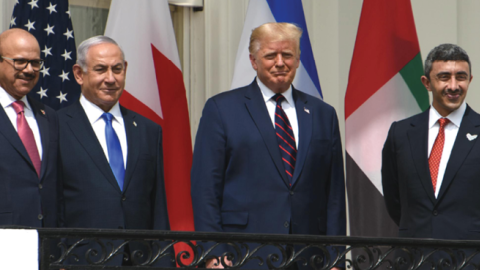 Caption
Leaders stand outside of the White House following the signing of the Abraham Accords on September 15, 2022, in Washington DC. (Chen Mengtong/China News Service via Getty Images)

In the two years since the September 2020 signing of the landmark Abraham Accords — the first Middle East peace treaty to be forged since the Israel-PLO agreement of 1993 and Israel-Jordan treaty of 1994— there has been more progress in shared economic prosperity, and mutual security between the UAE, Bahrain, Israel, and follow-on Accords signatories than in the forty-two years of the Israel-Egypt Camp David Accords of 1980.

The warm peace, blossoming trade, defense ties, and genuine human connection that defines today’s relationship between Abraham Accord partners stands in defined contrast to the important but fundamentally different earlier agreements and is a direct result of the remarkable and inspiring choices demonstrated by the courageous leaders of Bahrain and the United Arab Emirates, whose bold choice to embrace tolerance and mutual prosperity is transforming the future of all the children of the Middle East – Muslim, Jewish, Christian, Bahai, and every other faith and background — and inspiring hundreds of millions of people beyond the region.

According to the non-profit Abraham Accords Peace Institute, trade between Israel and the United Arab Emirates has exploded to unanticipated levels across sectors ranging from healthcare, cybersecurity, agriculture and food security, defense, and tourism. Mutual defense and integrated intelligence, and counterterrorism cooperation are equally impressive and essential to the safety and growth of regional ties. Additionally, the Accords have deepened relations between Israel, Egypt, and Jordan. Egypt’s President Abdul Fattah al-Sisi hosted then-Israeli Prime Minister Naftali Bennett and current President of the United Arab Emirates and then-Abu Dhabi Crown Prince Mohammed bin Zayed for a historic trilateral summit in Egypt’s Sharm el-Sheik, and Egypt-Israel trade relations have soared, with the two countries targeting $700 million in annual bilateral trade by 2025. Similarly, Jordan-Israel relations have deepened, with several multilateral trade agreements implemented and a dramatic increase in the frequency of vital leader-to-leader meetings. Saudi-Israel ties have also increased, with the Kingdom opening its airspace to all carriers, including El Al, Israel’s national carrier, and Israel agreeing to withdraw an observation force from two key Red Sea Islands, promoting their transfer to Saudi Arabia from Egypt.

Yet, for many in Israel, the Middle East, and around the world, the diplomatic and national security interests reflected in the varied and growing partnerships among the Accord and regional partners are dwarfed by the indelible and deeply moving personal and human connections that have become manifest and are possible when leaders embody in actions the values they espouse in diplomatic language.

Earlier this month, with the blessing of the united leadership of the UAE, the nation’s Foreign Minister Sheikh Abdullah bid Zayed Al Nahyan made a historic visit first to Jerusalem, his second to Israel in the past year, where he visited the home of Israel’s President Isaac Herzog, and shared with him a personal letter from His Highness Sheikh Mohammed bin Zayed Al Nahyan, President of the UAE and Ruler of Abu Dhabi. Speaking at a reception in honor of the Foreign Minister and the UAE Ambassador to Israel at his official residence, on behalf of the people of Israel, President Herzog told Sheik Abdullah, “We welcome you here with open arms and open hearts. We welcome you to our home as dreamers watch a dream come true.”

Sheikh Abdullah followed that moving reception with a visit to Yad Vashem, the Jewish state’s Holocaust Memorial Museum, where he laid a wreath at the Hall of Remembrance in honor of the victims of the holocaust, followed by another historic meeting with Israel’s Prime Minister Yair Lapid.

Welcoming Sheikh Abdullah to Jerusalem, President Herzog called the Abraham Accord normalization agreements “a paradigm change in the Middle East, of sounding new voices, of painting new horizons for our children and their future and a celebration of life and change.” Foreign Minister Bin Zayed, visiting Jerusalem for the first time, called it “a privilege and an honor” to be in Israel and hosted by the president and first lady.

Inscribing the guest book at Yad Vashem, Sheikh Abdullah wrote, “I am here today to remind ourselves of the lessons that history teaches us and the great responsibility upon us to act with tolerance for building our community and society. We must take the brave step of building a bridge of true peace for the coming generations.”

In welcoming His Highness the Foreign Miniter to his offices across the street from Israel’s Knesset, Prime Minister Lapid remarked, “Welcome to Jerusalem. My friend, your historic visit here today marks another milestone in our nation’s friendship. Together, we’re building a brighter future for all the people of our region.”

Economic and diplomatic ties between Israel, Bahrain, and the UAE have flourished since the signing of the Abraham Accords, with thousands of Israeli tourists visiting the Gulf states and the countries exchanging diplomatic and security support. Trade with Israel is expected to reach more than $2 billion in 2022, up from $1.2 billion last year.

While those statistics are impressive and the trade and cooperation that animate them are meaningful and growing, nothing can eclipse the real, courageous human ties being forged by the historical figures of the region, who choose to lead and demonstrate to their people and the people of the world, what is possible with determined actions that transcend the bounds of past and define a future of shared tolerance and brotherhood.