Skip to main content
Reports
The “China Dream” and the African Reality: The Role of Ideology in PRC-Africa Relations 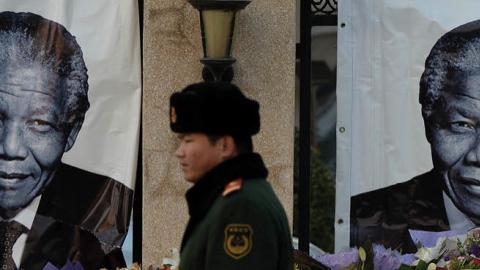 Caption
A Chinese policeman walks past a memorial to the late South African leader Nelson Mandela outside the South African embassy in Beijing on December 11, 2013.

The Chinese Communist Party (CCP) promotes its worldview and political and economic model overseas, particularly in the developing world, albeit in a very different manner than it did in the era of Mao Zedong. Under Mao, who fashioned himself the champion of Third World revolutionary movements, China exported a comprehensive, proactive, and universal ideology. Today the party’s theorists are struggling to develop a message of similar caliber. What they have produced so far has not translated into a particularly coherent or compelling “Xi Jinpingism” that appeals across cultures and societies. But this has not stopped the PRC from pursuing an ideologically grounded foreign policy. President Xi speaks frequently of a “Community of Common Destiny,” a still-vague vision for a Sinocentric world order in which the CCP’s model is lauded as a contribution to human civilization, liberal democracy is widely discredited, and the developing world looks to China above all others for inspiration.

To this end, Beijing seeks to provide developing world elites with a malleable intellectual and practical program for advancing illiberal governance. In the intellectual arena, the CCP provides a critique of the existing international order and political and economic liberalism along with a defense of developmental authoritarianism. In a more practical sense, the CCP disseminates certain governance tools, technologies, and practices—such as organizational techniques for managing a single-party state—in a piecemeal and ad hoc manner in order to bolster illiberalism where it already exists. In this sense, the CCP acts as a partner or mentor in illiberal governance rather than as the agenda-setter of a tightly bound ideological coalition.

This ideological element is present in China’s approach to Sub-Saharan Africa, a region long considered to be primarily if not exclusively of economic importance to Beijing. The PRC has earned the reputation for being a pragmatic, transactional actor in Africa, and for good reason. Since 2000, Chinese lending, trade, and investment in Africa have all increased dramatically, while over a million Chinese migrants have moved to Africa to engage in various commercial ventures. The PRC is not selective in its partnerships; it maintains diplomatic relations with all but one African state, and it has long abandoned support for revolutionary armed movements. At the same time, as a continent of 54 mostly developing countries, Africa is central to Xi’s “Community of Common Destiny.” In order to realize this vision, the CCP systematically introduces African elites to its theories, norms, and practices through a variety of avenues, including party-to-party and military-to-military trainings that augment China’s economic ties with the continent.

The impact of these efforts on African politics is quite varied and fluid. Many African elites, such as those in Kenya and Nigeria, appear to see political engagements with the CCP as a cost of doing business with the world’s second largest economy. They have not meaningfully emulated elements of the CCP “model” to date and do not appear to have much appetite for such political learning. In contrast, those southern and east African countries ruled by former liberation movements have tended to be more receptive to Beijing’s lessons in illiberal governance. Many of the liberation movements received some degree of support from China during their armed struggles in the Cold War and drew inspiration from the CCP in notable ways, such as by adopting Maoist notions of the military as a “people’s defense force.” These historical and ideological affinities facilitate close cooperation with the CCP today, representing the clearest example of CCP partnership or mentorship in the realm of African governance.

The CCP’s overall impact on African politics should not be overstated, however. Ideological affinities matter, but economic interests play a greater role in pushing African states into Beijing’s orbit. African states, the former liberation movements included, tend to look to multiple countries for lessons in development and governance—particularly to the East Asian “late industrializers”—rather than trying to replicate any single model offered by China. More importantly, the behavior of Africa’s illiberal regimes is generally best understood as a product of local and regional politics rather than imported ideologies or practices. In other words, the CCP’s support and ideas can bolster illiberal regimes, but African ideas and political realities are ultimately what drive these regimes’ behavior.

Even if the CCP were to develop a more exportable ideology and push African states to adopt it wholesale, such efforts would face notable limits. Africa’s authoritarian states generally lack the capacity to achieve anything close to the near-totalitarian control that the CCP exercises. Certain authoritarian regimes, such as Rwanda’s and Tanzania’s, are relatively disciplined and efficient, and their relationships with the CCP merit scrutiny. But these represent the exception rather than the rule. In the near-term, it seems likely then that the CCP’s theories, practices, and technologies will continue to embolden certain illiberal regimes, but no “Xi Jinpingist” state is likely to emerge in a meaningful sense.

The CCP therefore represents a very different ideological challenge than the Soviet Union, the historical analogy that has increasingly been invoked in this era of great power competition. Whereas the USSR and Maoist China sought to overthrow governments and gain satellite states in a zero-sum competition, the PRC today is more circumspect in its efforts to build and sustain its influence in Africa. It enforces notable conditions on its partnerships with African states—such as adhering to the “One China Policy”—but it has not systematically sought to force any state to choose between Washington and Beijing. Unlike the Cold War, US-China competition is not likely to play out as a contest between ideologically opposed camps in a divided world so much as it will be a struggle over the norms and values that each side hopes will guide a globalized world, Africa included.1

To best compete, therefore, the US must first present a positive vision for liberal values and development rather than adopt a zero-sum mindset that is liable to alienate Africans who understandably wish to avoid a repeat of the Cold War. Second, the US must be pragmatic and patient in its approach to Africa, recognizing that it does not have the resources or influence to dramatically reduce China’s footprint on the continent in the near future. This will require identifying and prioritizing core strategic interests on the continent that may be at risk while accepting that there are limits to how much any state can shape African geopolitics.

In order to be competitive in Africa in the long-term, the US will ultimately need to focus more on African needs and interests than on Chinese behavior. Forging stronger ties across Africa, the world’s fastest growing continent in terms of population, is not simply something that great power competition necessitates. It is a smart move in its own right.